Henrik Lundqvist's first Stanley Cup Final has been a nightmare

The only thing missing from Lundqvist's résumé is a Stanley Cup, and his first shot at it is going as poorly as it could possibly go.

Share All sharing options for: Henrik Lundqvist's first Stanley Cup Final has been a nightmare

During his nine-year career, Henrik Lundqvist has not only been the backbone of the New York Rangers organization, he has been one of the best goalies in the world. He has achieved almost everything a player can at the position at both the individual and team level.

He's won a Vezina Trophy as the best goalie in the NHL. He has consistently been near the top of the save-percentage leaderboard over the past six years. And he even found success on the International stage by backstopping Sweden to a gold medal at the 2006 Olympics. The only thing missing on that résumé is the opportunity to have his name on the Stanley Cup, and he finally had a chance to add that this season with the Rangers' surprising run to set up their meeting with the Los Angeles Kings.

Lundqvist, as he usually is, has been the biggest driving force behind the Rangers' success this postseason.

He was nearly unbeatable in two different Game 7s, including one on the road in Pittsburgh in the second round, and recorded a shutout in the their series-clinching win in the Eastern Conference Final against the Montreal Canadiens. Everything was going his way, and he was the biggest reason the Rangers, a substantial underdog heading into the Stanley Cup Final, were going to have a fighting chance in this series.

That's why this entire experience has turned into a complete nightmare for Lundqvist and the Rangers.

It's been the goaltending, the one area they should have had an advantage in the series, that's helped put them in the 3-0 hole they face on Wednesday night. Not only the performance of Lundqvist, who has a dismal .892 save percentage over the first three games, but also the play of Jonathan Quick -- who had mostly been nothing more than a passenger in Los Angeles' playoff run this year behind it's suddenly unstoppable offense -- at the other end of the ice. Specifically their Game 3 performances that saw Quick record a 32-save shutout while Lundqvist gave up three goals on just 15 shots.

And that's the game that has to hurt for the Rangers, not only because they managed to get several chances offensively only to have Quick make a series of unconscious saves at the other end of the ice, but because so many of the Kings' limited chances ended up in the back of the net.

And you could make the argument that none of them were actually the fault of the goaltender.

Jeff Carter's first-period buzzer-beater deflected off the skate of defenseman Dan Girardi on its way to the net.

Jake Muzzin's second-period goal changed direction after hitting Martin St. Louis in front of the net. And Mike Richards' third-period goal, the one that pretty much put the game -- and most likely the series -- out of reach came after Richards initially attempted to make a cross-ice pass only to have it bounce off of Ryan McDonagh and come right back to Richards who could then slide it into an empty net as Lundqvist attempted to recover.

It was a similar story in Game 2 when Dustin Brown deflected a Willie Mitchell point shot into the net for the game-winner in overtime, which came after Dwight King helped ignite one of the Kings' two-goal rallies by falling on top of Lundqvist in the crease. 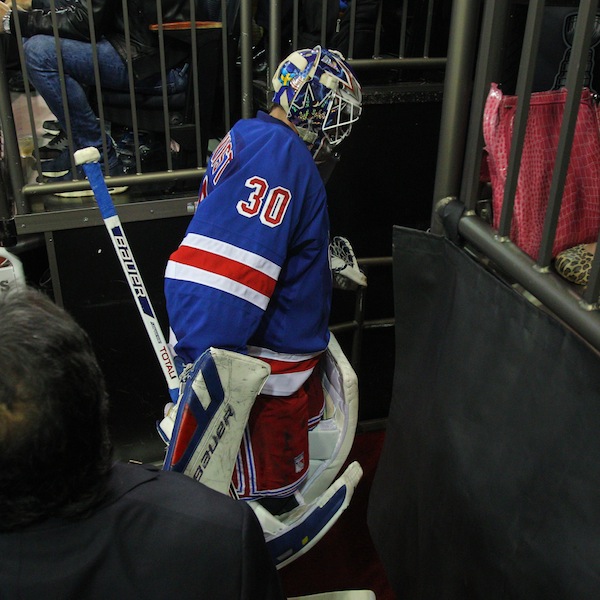 And you know what? That's hockey. And sometimes in a best-of-seven series hockey happens and everything can work against you at the wrong time, turning an otherwise close, competitive series (which this has been, despite the lopsided win total) into a potential sweep. Goals off of deflections count just as much as goals that cleanly beat a goalie, and it's not like the Rangers weren't able to benefit this postseason from somebody falling into a goalie. The beauty of the Stanley Cup playoffs is that anything can happen in a best-of-seven series, and the same things that worked in your favor earlier in the playoffs to help you advance can suddenly go against you and crush your dreams.

It's series' like this where we have to be careful. So much of the narrative around the playoffs and the Stanley Cup Final is about a players' "legacy," or about their standing among their peers. In comparison to Quick, who is one win away from claiming his second Stanley Cup in three years, the hockey community probably is not going to be very kind to Lundqvist and his legacy (heck, it's already started a bit).

And the end of this series, whether it ends on Wednesday or later in the week, it's possible for all of these statements to be true.

Even with the two statements above, he can still be on the short list of best goalies in the world, and perhaps even still at the top of it, with or without his name on the Stanley Cup right now.