Bandwagon fans are good for hockey, and we shouldn't ridicule them

We have a tendency to ridicule bandwagon fans, or fans who might not know as much about hockey as those of us who have been watching the game for years. We shouldn't do that, because bandwagoners are good for the game.

Share All sharing options for: Bandwagon fans are good for hockey, and we shouldn't ridicule them

I was born in Atlanta, Ga., and was raised by two Floridians who never learned how to ice skate. Hockey was never in my blood.

Others sports were, though. I entered this world a few days before the Braves began their worst-to-first campaign in ‘91, and thanks to my father, that club became a huge part of my life. By the late '90s, my love for the Braves evolved into a strong sense of loyalty to all things Atlanta.

My room was covered in Falcons posters; I wore a Georgia Tech hat everywhere I went; I always played as the Hawks in NBA Jam 64, if only to dunk with Dominique Wilkins. So when the NHL announced that my hometown was being awarded an expansion franchise, I was quick to take notice. (It didn’t hurt that "The Thrashers" sounded like an incredibly badass name to my 8-year-old self). 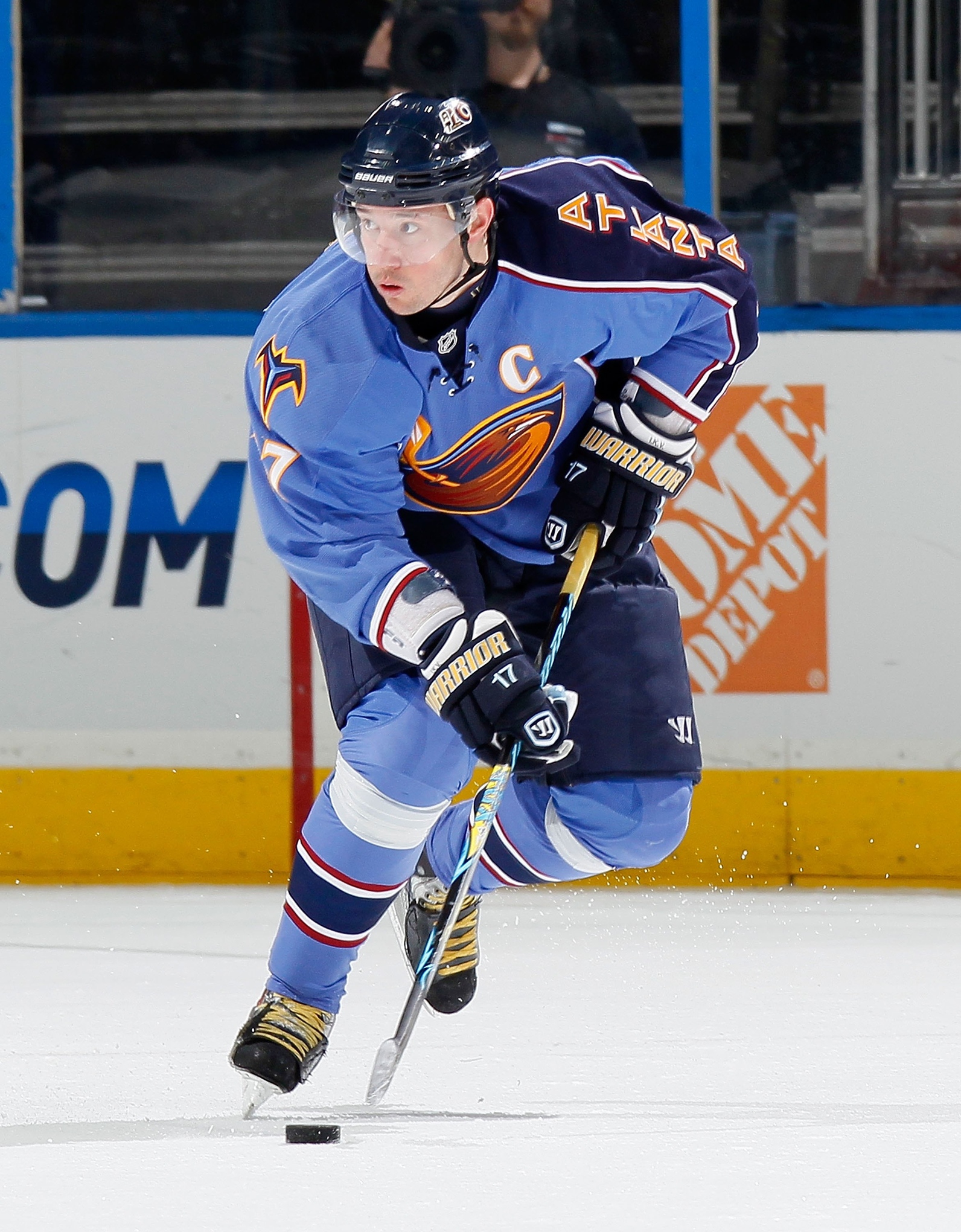 For the first few years of the Thrashers’ existence, I monitored them from afar -- glancing at the standings once in a while in the newspaper, nothing more. My family moved up to Boston shortly before Patrick Stefan was drafted, and back then, it was tough to follow a team hundreds of miles away.

Then, one winter night in 2002, I turned on the TV to find Atlanta competing in its hideous red, navy and Tonka-truck-yellow jerseys. Mid-way through that contest, a Russian kid named Ilya Kovalchuk fired a slap shot harder than I thought was humanly possible. The puck flew into the back of the net. The red light flashed.

Kovy celebrated like he just won the Cup, and so did I.

I didn’t always enjoy living in New England. The winters are long, and there are no Waffle Houses to be found. However, growing up in that region allowed me to befriend kids who considered the local rink their second home. Fresh off my first NHL viewing experience, it didn’t take long before I found some buddies who were willing to talk a little puck.

They became my mentors.

I owe a lot to those guys. I don't remember most of their names, and their faces are nothing more than blurs at this point. But they had an instrumental role in the outcome of my life.

When I mispronounced someone’s name, they corrected me with straight faces. When I wanted to learn some rules, they drew X’s and O’s on construction paper. They gave me a little grief for not knowing what the Stanley Cup was, but after a quick laugh they began detailing the trophy's illustrious history.

"It's the greatest freakin' thing on the planet," one of them said.

Had those fifth-graders made fun of me when I asked about "Will Gretzky" or what constituted offsides, my curiosity would have almost certainly been extinguished. Part of me expected that to be the case.

Thankfully, I picked the right people to hang out with. Their benevolence allowed me to develop a new passion.

By 2004 I was a die-hard Thrashers fan. Dan Snyder’s death shattered my innocence. Mike Dunham’s late-season collapse in the spring of 2006 still haunts me. The most vivid memory from my childhood is the first time I heard the Philips Arena goal horn from the stands.

I held back tears when they packed their bags and moved to Winnipeg. 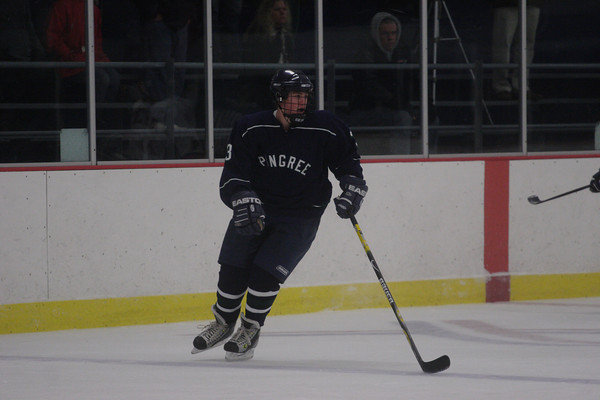 In the summer of 2007 I took this passion a step further. I saved up some money and bought a pair of skates, a helmet, some gloves and a stick. For five days a week, two hours a day I worked out on our school’s sheet of ice, gradually learning how to keep my balance, shoot the puck and stop without tumbling over.

I was allowed on the junior varsity team that year, and was named a co-captain as a senior. In time, I no longer stuck out like a sore thumb, and I still hit the ice as frequently as time allows.

The first goal I ever scored in a regular-season game -- top shelf, glove side -- remains the happiest moment of my entire life.

Of course, I emulated Kovalchuk's celebration from all those years ago.

Today, I write about sports for a living. I write mostly about baseball, basketball and football, but it all began with hockey.

It began with me scribbling rants on a notepad when Bob Hartley’s emphasis on the dump and chase made me pull my hair out. A few years later I took to online message boards, then created my own blog, then received NHL credentials.

Undoubtedly, those kids from elementary school guided me down a path that’s led to a fulfilling career. Where would I be without them? I have no idea.

So I guess I’m a pretty good example of why it’s important to be nice to those who express interest in our favorite game. Sadly, not everyone acts with this in mind.

from an SBNation post about how seattle "must" get an NHL team pic.twitter.com/1wIuUXTxZU

If you’re active on Twitter, you’ve probably noticed folks berating naïve fans for their lack of knowledge. It happens quite often, and it happened again on Saturday, when a blogger from SB Nation's Sonics Rising, which covers the potential return of the NBA to Seattle, published an article on his new-found interest in the NHL. He wants a team in his city; he wants a reason to go all-in.

In reading that piece, I saw a lot of my young self. I saw the fervor, and I also saw the inexperience. Some decided to focus on the latter, which is why I decided to pen this story.

There's a double-standard at play here. A rather noticeable sect of the hockey community wishes more members of the population would care about their sport, but they belittle those who aren't as educated as they are.

It's as if these browbeaters expect people to turn on a game and instantly understand Corsi and Fenwick and more than a century-worth of history. It's hypocritical, and it's pathetic.

You've certainly been told about bandwagoners, who in the eye of the public, have become caricatures donning Yankees hats and Heat jerseys. Loyal fans are supposed to hate bandwagoners -- or so we've been told.

Thing is, a lot of us had no choice but to hop on the bandwagon. Lots of you were born into hockey, but like myself, many had to discover it on their own.

They needed a moment, or a collection of moments, to get hooked.

What's wrong with uneducated onlookers joining the fun after seeing their local teams do well? Without them, only a finite number of hockey families would exist.

In that case, how does the sport grow at an acceptable rate?

Bandwagoners -- at least those who stick to their guns -- are great for hockey. They're why the NHL keeps breaking revenue records season after season.

Just look at the changing landscape in Illinois: The number of registered hockey players in that state grew 36.5 percent from 2008-09 to 2012-13. The Blackhawks, who won two Cups in this stretch, deserve much of the credit there.

Just look at the droves of people in California who are signing up for beer leagues and youth clinics and high school tournaments: According to USA Hockey, only six states had more registered participants in 2013-14.

Think all those players had moms and dads who dragged them to practice at 5 a.m. every morning?

The writer of the aforementioned article -- a potential bandwagoner -- misspelled a couple names in his original draft, and was, predictably, torched on social media. That screenshot of his words was taken before errors were corrected, and a clique of Internet trolls had a hardy laugh.

via the Sonics Rising comments section

Mind you, many of these trolls also wonder why hockey isn't as "mainstream" in the United States as other sports. Perhaps a good look in the mirror can answer that question.

I hope the Seattle blogger didn't see the messages that have littered the Internet. If he did, I hope he ignored them. After reading a couple cruel responses I thought back to the week when Kovalchuk's shot sent me into a frenzy. I thought about how I would have reacted if someone took my mistakes and flaunted them in public.

Where would I be today?

Of course, the bullies are a loud minority, but a few jerks can still make a significant impact. If even one newcomer is turned off to hockey because of this online (and sometimes offline) harassment, well, that’s one too many.

Rather than admonish novices for their lack of knowledge, embrace their enthusiasm and help them along. Explain why it’s a two-minute penalty for sending the puck over the boards. Present both sides of the fighting argument. Take them to a game and describe all the nuances that make this game so beautifully unique.

Tell them about all the happiness it brings you.

It's unlikely this bullying will stop, but we can curb it by recognizing the issue. And if a friend/family member/coworker ever approaches you and asks a few questions, do what you can to make them feel welcome.

You never know how far that kindness can go.