Why do NHL teams give goalies long, stupid contracts?

No group of players in the NHL are more unpredictable than goalies. So why are teams still signing them to such long-term contracts when so few of them work out as planned?

Share All sharing options for: Why do NHL teams give goalies long, stupid contracts?

Evaluating goalies can be a tricky subject.

It's the one position NHL general managers as a group have yet to fully master, whether it's trying to identify young talent in the draft or adding an established NHL veteran through trade or free agency. It's an important position, but it's also an incredibly volatile one that is dominated by randomness, late-blooming players, and those who are great one year, only to completely lose it the next.

So why, then, are NHL teams still signing players at the position to long-term contracts? And will they have learned their lesson this offseason when it comes to the next crop of players that will be eligible for free agency or new contract extensions? 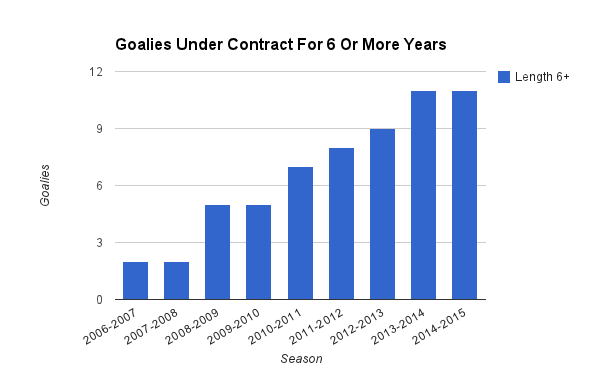 Looking back over every one of those contracts that was signed many of them took place either during or immediately after the goalie had a huge season, usually above their career norms with the hope that they could duplicate it in the coming seasons.

Did they work out?

Below is every six-plus year contract (in order of contract length) that a goalie signed over that time, the save percentage they had the year they signed the contract, and their save percentage in the seasons after signing.

This does not include Henrik Lundqvist's new eight-year contract because he has yet to play a full season since signing (but it does include his previous six-year contract).

(*Player has played just one season after signing contract; ** New contract has not started yet)

Nine of the goalies on that list signed their long-term deals after a season where they posted a save percentage of .920 or better. The majority of them have, to this point, failed to reach that level again.

Those same goalies have combined to play 29 seasons after signing their contracts and reached a .920 save percentage just five times (Kiprusoff did it three times in eight years Calgary, Rask did it this past season after signing his new deal with Boston, and Luongo did it once for Vancouver before being traded to Florida this past season).

Unless you are dealing with one of the absolute best goalies in the world or a future Hall of Famer, teams aren't getting what they paid for with these contracts, and certainly aren't getting the type of production that you need to nail down for six or more years. Fortunately the new CBA has saved teams from themselves, disallowing another 10-or 15-year contract, so the Rick DiPietro debacle (which will never make sense) won't be repeated.

But those six-to-eight year deals are still on the table.

Which goalie is next?

The two biggest names on the unrestricted free agent market are Ryan Miller and Jonas Hiller.

The free agent market for starting goalies has been a tough one in recent years, and with Miller being 33 years old and Hiller being at best a league average goalie at this point, the chance of either guy landing a six-or seven-year contract seems pretty much nonexistent. 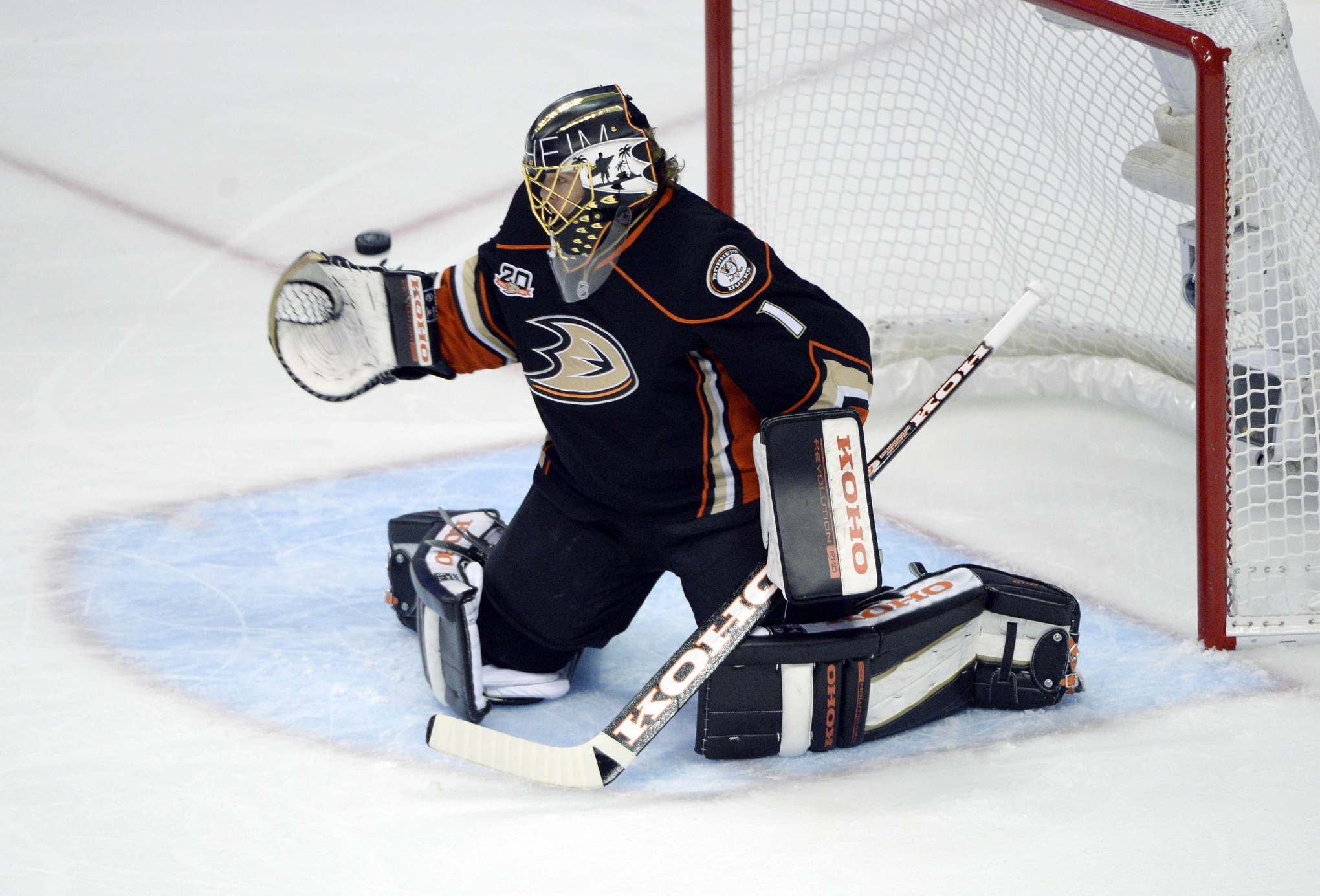 When it comes to the players eligible for new extensions, Bishop is coming off a sensational season with Tampa Bay and was a tremendous value against the cap. His importance was magnified in the playoffs when he was sidelined with an injury. His body of work in the NHL is so small, and with his AHL track record being good but not great, any sort of a long-term deal would be a huge risk at this point. But Steve Yzerman doesn't seem to be the type of general manager that would make that sort of deal.

Antti Niemi has quietly been very good in San Jose, but with the Sharks seemingly on the verge of an offseason of change nobody really knows what's going to happen out there. A new deal for him seems like a long-shot at this point.

The two biggest names, and the most likely for new deals, are Schneider and Fleury.

Schneider is obviously the future in New Jersey and seems like the guy that is likely to get the next long-term deal. Not only because the team gave up a first-round pick for him, but also because Brodeur has been a sieve the past couple of years and is likely on his way out. There is also the fact that Schneider has been really good and is still relatively young. Since he became a semi-regular starter in the NHL during the 2010-11 season no goalie in the league (minimum 82 games played) has a better save percentage than his .928. He's also coming off a solid season with the Devils where he didn't get anywhere near enough playing time given how well he played.

He might even be the rare case where it doesn't come back to haunt the team.

The biggest risk would seem to be Fleury.

Goalies are awfully hard to predict, and as a result we see some terrible moves. How can a team take advantage of the uncertainty?

Track all the signings right here

July 1 is a huge day in the NHL. Follow along with all the moves right here as free agency begins.

The goaltending gameplan Track all the signings right here

One of the funny things when it comes to evaluating goalies is the way bad teams tend to think their goalie is better than he actually is and is only performing poorly because he's not playing behind a better team. This would probably to apply to the Winnipeg Jets and how they seem determined to go into another season with Ondrej Pavelec manning the crease despite consistent sub-par performance. On the other side, good teams seem to think their goalie is better than he probably is because he might win a lot of games and make timely saves (as opposed to those saves that come at bad times).

This is where Fleury seems to fall.

He racks up a lot of wins and makes some highlight reel saves, so he's a popular player. And because he didn't completely collapse on himself in the playoffs this past season there seems to be a belief in Pittsburgh that whatever problems he had in the past have disappeared. But it comes back to the same question asked earlier: Is that type of production that you absolutely have to lock-up with a long-term contract extension? And can you possibly find similar or better production for a cheaper price? Given that he's only finished in the top-10 in save percentage one time in his career, the answer to that question is almost certainly yes.

In the end, given the unpredictably of the position and the number of teams that have won the Stanley Cup with starters on cheaper contracts (six of the nine Cup-winning goalies in the salary cap era made less than $3.9 million per year) any sort of a long-term contract for a goalie just seems to be an unnecessary risk.