Matt Niskanen is going to get a lot of money from somebody, but is it going to be the right investment?

When NHL free agency opens in July, somebody is going to drive a dump truck full of money to the home of defenseman Matt Niskanen, probably on the first day of the signing period.

For Niskanen and his agent, it is going to be the perfect storm.

He is coming off a career year that saw him score 10 goals to go with 36 assists and a plus-33 rating that was tops among all defensemen in the NHL. When you combine that production with the fact that he is one of the youngest players to hit the open market -- he doesn't turn 28 until December -- he might be the most attractive player available at the position. And all of that is happening during an offseason where the salary cap is on its way up.

He's going to get paid.

But you have to ask yourself, "Is Matt Niskanen the type of player I want my team to get into a bidding war for?"

On one hand, he is a good player.

He's a strong skater, makes a good pass to get the puck out of danger and up the ice, and showed this season that he can man the point on the power play if needed. His possession numbers over the years have always been solid, and while several unnamed Penguins defensemen reportedly disliked -- and even hated -- the system in Pittsburgh (presumably the guys who couldn't skate or pass), Niskanen excelled in it. As the NHL continues to drift away from the rugged, stay-at-home types who can't move the puck to a more mobile defenseman, he should be an attractive option for several teams. Colorado, Dallas or Edmonton would seem to be the kind of team that could really use a guy like him.

But again. The money.

In a salary cap league you can't afford many mistakes, especially if your team is operating on its own internal cap, and Stanley Cup teams usually avoid those sorts of mistakes.

Can Niskanen repeat the career year?

The issue is in balancing out his solid 2013-14 year with what he's done before and what you expect him to do in the future. Going off of last year, he's a rock star. But that's one year out of seven, and it's a question of repeatability. One of the worst types of free agent a team can encounter is the "career year" guy, because you're not only buying him at his highest possible value, but it's almost guaranteed to be all downhill from there. And that could be a real issue for whatever team ends up with Niskanen.

He had a great year. Nobody is going to -- and nobody should -- take that away from him. But a lot of things also went right for him. When he was on the ice the Penguins scored on more than 10 percent of their 5-on-5 shots. Before last season, his teams scored on 8 percent of those shots, which is more in line with the league average. When he was on the ice last season his team had a .928 save percentage. For his career, that number was .914.

Put it all together, and his PDO (the sum of his 5-on-5 on-ice shooting and save percentages) during the 2013-14 season was an astronomical 1031, fifth-highest among all defensemen (minimum 62 games played) in the NHL and the highest of his career. That is almost sure to drop next season, and probably drop significantly. Just consider that between 2009-10 and 2011-12, 29 different defensemen finished with a PDO of 1031 or better. Those same players averaged a 997 mark the following season.

Unless Niskanen has suddenly developed the ability to drive those shooting and save percentages in his team's favor, he probably is not going to be as fortunate next season. Just look at how his career has played out to this point. 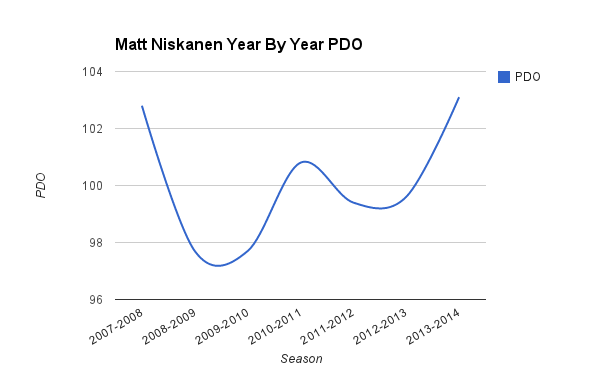 No more Crosby or Malkin

The other factor that needs to be considered is that he will not have the luxury of playing behind Sidney Crosby and Evgeni Malkin on another team, something that no doubt helped boost those numbers a bit last season.

Just a little more than 785 of his 1,334 5-on-5 minutes (that is 59 percent of them) came with either Crosby and/or Malkin on the ice with him. He was a 58 percent Corsi player in those minutes while 75 percent of the goals scored belonged to the Penguins. That's a good foundation to a career year.

As a second-pairing defenseman, he is going to continue to be a fine player. Hell, he would continue to be a fit for the Penguins, especially considering how well he seemed to play alongside 19-year-old Olli Maatta this past season. Given their salary cap situation, that is probably not in the cards barring a major move somewhere else on the roster. It's been suggested that the Penguins could try to trade Kris Letang before his no-trade clause kicks in on July 1 and use that extra cap space to re-sign Niskanen. But that would be total lunacy. Not only because you're buying a guy coming off a career year at his highest point, but because you're also selling your best defenseman at what might be his lowest possible value.

But if you're going to pay him like a top-pairing defenseman and expect him to repeat what he did this past season, or even come close to repeating it, you're probably setting yourself up for disappointment.

And that is pretty much what the first day of NHL free agency is all about.