Another midseason trade with the Columbus Blue Jackets has helped put the Los Angeles Kings back in the Stanley Cup Final.

If the Los Angeles Kings are able to win their second Stanley Cup in three years, the Columbus Blue Jackets organization should get a few honorary championship rings out of it. Or at the very least, they should receive a couple of VIP seats to the parade because they've had a major hand in helping the Kings become one of the most successful organizations in the NHL over the past few years.

Like the 2012 Kings that steamrolled their way to the Final from the No. 8 spot in the Western Conference, this year's team wasn't one of the top-seeded teams in the conference, finishing the season sixth in the conference in points and ninth in the league.

Both teams were probably significantly better than their records at the end of the season, and contrary to what Hall of Fame football coach Bill Parcells has tried to sell over the years, teams are not always what their record says they are. The past six Stanley Cup Finalists have finished the regular season ninth, 12th, first, fifth, seventh and 13th in total points for the entire league.

Those same teams have finished first, sixth, first, fourth, fourth and 11th in FenClose -- or, unblocked shot attempts when the score is close. Puck possession is important when it comes to competing for and winning the Stanley Cup, and in many ways is more of an indicator of which teams are Cup-worthy than simply counting regular season wins.

Over the years the Kings have gradually become one of the best possession teams in the NHL, going from 29th in the league in FenClose in 2007-08 to the top five in each of the past three seasons, including the No. 1 spot in each of the past two. They were fourth in 2012 when they won their first Stanley Cup.

But while the recent Kings teams have been able to dominate the puck and badly outshoot their opponents, they've been a consistently mediocre team (and even at times a bad team) when it comes to actually scoring goals. They nearly missed the playoffs in their Stanley Cup year because they scored so few goals over the first two months of the season and lost several games they probably should have won. Even this season they were down to around 2.3 goals per game at their low point in early February, right around the time they lost nine out of 10 games while scoring just 13 goals.

They've been able to compete with such poor goal totals because their opponents never have the puck enough to score against them, and when they do have the puck the Kings are able to prevent teams from generating chances against them. But for as good as they were in these areas, they still needed a little something more.

Solution: A weapon from Columbus

In both seasons, it was a midseason trade with the Blue Jackets that helped turn their season around and give them the final piece they needed -- a legitimate top-line finisher who can put the puck in the net.

In 2012 it was Jeff Carter, a three-time 30-goal scorer who had fallen out of favor in Philadelphia, then never seemed to fit in Columbus after he was sent there in an offseason trade. All it cost the Kings was Jack Johnson, a big-money defenseman who oftentimes had not lived up to his contract and was no longer needed on the Los Angeles blue line, and a first-round draft pick.

This year it was Marian Gaborik.

Like Carter, Gaborik has been one of the top goal scorers of this era (since 2007 they rank sixth and 22nd, respectively, in the league in goals scored) and didn't cost the Kings a significant piece. This time the price was even lower. To get Gaborik, who had been limited to just 22 games with the Blue Jackets due to injury, it only cost the Kings Matt Frattin, a forward they acquired from the Toronto Maple Leafs before the season in exchange for their backup goalie, and a couple of draft picks.

Almost immediately his presence was felt.

The spike Gaborik gave the Kings' offense turned out to be eerily similar to the one they experienced two years earlier after Carter arrived from Columbus. The graph below shows the Kings' cumulative goals per game averages through the regular season and Western Conference Final in each season before and after the trades 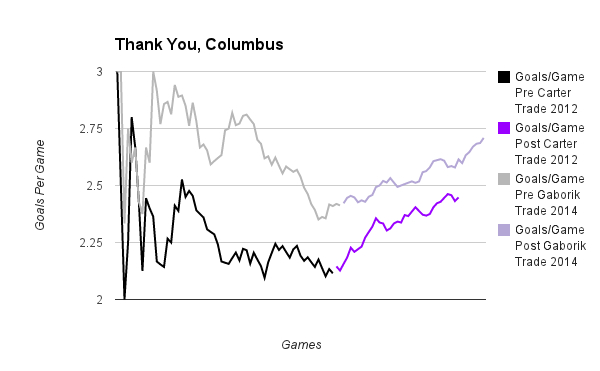 Yes, we have seen this movie before.

These Kings are better than 2012

What should really be scary for the New York Rangers as they prepare for this year's Final is that the Kings' offense is significantly better, even when taking into account the post-trade deadline improvements, than it was when they went on their historic playoff run two years ago, when they won 16 of their 20 playoff games.

This year the Kings are averaging a league-best 3.48 goals per game in the playoffs. Keep in mind that during the regular season, the NHL's top goals-per-game team was the Anaheim Ducks at 3.21 per game.

It's sometimes funny the way the Kings are perceived across the league. They're usually regarded as a defensive team that is carried on the back of their goalie, Jonathan Quick.

Earlier this season, coach Darryl Sutter addressed the "defensive" nature of the team and how it's really about how much the Kings control the puck. And while Quick was the Conn Smythe winner in 2012 and the face of their championship season, center Anze Kopitar was the real superstar of that playoff run.

This postseason, Quick has been nothing more than a passenger who has at times thrown an anchor over the side of the ship, forcing bailouts by an offense that has taken off at the right time, thanks in large part to the addition of an elite finisher like Gaborik.

After recording 16 points in 19 regular season games with the Kings, he enters the Final with a league-leading 12 playoff goals.

When you add a player like that to a team that already has a championship foundation in place without giving up anything significant from your NHL roster, and he fits in as perfectly as Gaborik has, the sky is the limit.