Share All sharing options for: It's cheaper for Rangers fans to travel to LA than watch the Stanley Cup at MSG

If you're a New York Rangers fan and you'd like to see your team play at Madison Square Garden in the Stanley Cup Final, you're probably noticed that tickets are insanely pricey. But there's a more affordable alternative to consider: how about a one-night, cross-country trip to see a game at Staples Center in Los Angeles?

Yes, that's correct: it is currently cheaper to book a flight to California, stay in a local hotel for an evening and buy two tickets to Game 1 of the Cup Final in L.A. than it is to simply buy two tickets to one of the games in New York City at the cheapest prices.

The folks at SeatGeek passed along that information to us this morning, and we went ahead and ran through the whole process -- you know, except actually dropping the ~$2,000 on the trip.

According to SeatGeek, which tracks tickets prices and trends across the secondary market, the cheapest tickets for Game 1 are $495 each. They're in Section 304, Row 9. 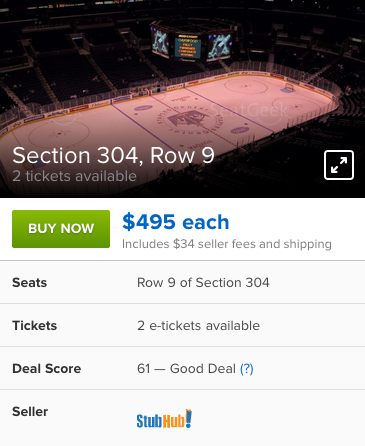 The cheapest flight available from the New York area to Los Angeles International Airport is a $490 round trip flight on US Airways. It leaves Newark Liberty International at 6:30 a.m. ET on Wednesday, stops in Charlotte, N.C., and arrives at LAX just before noon Pacific time. The return flight varies, but drags you back through Charlotte the morning after Game 1.

The cheapest hotel -- at least four stars -- we could find is the Crowne Plaza Los Angeles Airport, which runs at $113 for the night on Wednesday. 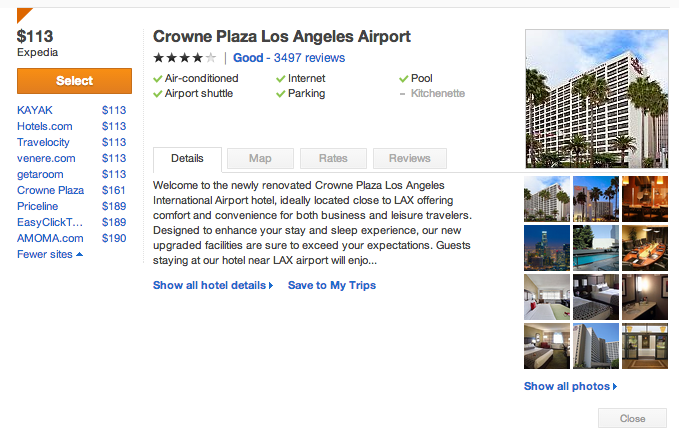 The cheapest tickets available for Game 3 of the Stanley Cup Final in New York City, meanwhile, are $1,087 for Section 416, Row 15. Two tickets at that price would cost $2,174, meaning you and a friend would save $91. And you'd get a nice cross-country trip to Los Angeles out of it.

Ticket price for the Final in NYC are pretty crazy, and SeatGeek also tells us that they're the most expensive tickets ever for an event in Madison Square Garden -- or, at least since they've begun tracking the secondary ticket market in recent years.

Game 3 and 4 in NY are the most expensive opening Finals games (meaning Games 1 and 2 or 3 and 4) we've recorded at any venue since we started tracking the resale market in the 2009-10 season. The previous high was set in Vancouver in 2011 at $858 per ticket for Games 1 and 2 of the Canucks-Bruins Finals. They're also easily the most expensive tickets we've seen for any event at Madison Square Garden. Game 3 tickets are averaging $1,626 each on the secondary market, and Game 4 tickets are going for $1,703 apiece, far exceeding the previous high of $1,026 per ticket for the 12.12.12 Concert for Sandy Relief.

I think most of us are cool with just watching on TV.