Don't be afraid of Ales Hemsky in NHL free agency

Will NHL teams make the same mistake in free agency that they made at the trade deadline when it comes to Ales Hemsky?

Share All sharing options for: Don't be afraid of Ales Hemsky in NHL free agency

Any contending team that needed a talented winger for a playoff run could have had Ales Hemsky for next to nothing at the NHL trade deadline. Few seemed to have any serious interest. Based on the way he played down the stretch for the Ottawa Senators, that was a pretty big mistake.

Let's see if those same teams repeat it in free agency.

After turning down a multi-year contract offer from the Senators last week, Hemsky is headed for the open market on July 1 and it's going to be fascinating to see what sort of interest and contract is out there waiting for him. His reputation around the league is pretty well established, and once a player has reached this point in his career, that can be a difficult thing to change. (Just ask Alexander Semin.) You're going to hear a lot about him being a soft, perimeter player. How he's constantly injured. How his career has been a bit of a disappointment at times and his offensive production has dwindled in recent years.

And most of it will be garbage.

What you should hear about is how talented he is and how he could be a valuable addition to a contending team's lineup if he is used properly and in the right situation. It became clear over the past couple of years that the right situation was most definitely not in Edmonton. Not only because the team continued to be stuck in its seemingly endless run of soul-crushing mediocrity (a run that Hemsky experienced longer than anybody currently in the organization), but also because his ice time had been decreasing and the team started to anchor him down with lesser linemates while simultaneously asking him to play against tougher opponents.

It wasn't exactly the greatest recipe for success.

After the Oilers gave him away to Ottawa at the trade deadline and he had an opportunity to play alongside Jason Spezza and Milan Michalek in more offensive situations, he finished the season with 17 points in 20 games and was perhaps one of the best pickups any team made at the deadline. It could happen again for another lucky team in free agency if it's willing to look past what is said about him and look at what actually happens on the ice.

The one thing about Hemsky that is an undeniable fact is that he has missed a lot of games throughout his career, particularly during one three-year stretch between 2009 and 2012. But don't automatically assume that was because he is "injury prone" or "soft." Sometimes injuries can be nothing more than bad luck and be impossible to predict. Sometimes they can be a result of a player's particular style of play. In Hemsky's case, I think some of it has had to do with how, at times, he is almost too willing to take a hit to make a play, and because he does carry the puck into high traffic areas with little to no regard for his own well-being.

This heat map, via Sporting Charts, shows every even-strength shot on goal he's taken since the start of the 2009 season. 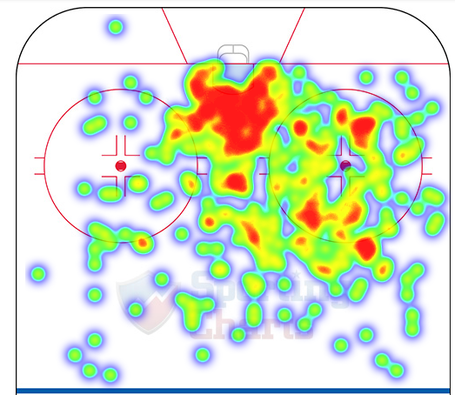 That's not exactly a guy who floats along the boards firing shots from the outside. Just look at every goal he scored during the 2013-14 season. Every single one of them either involved him standing in front of the net or carrying the puck through defenders and traffic to get to the front of the net.

Few players in the league possess his skating ability or slick hands with the puck, and all of that seems to get overlooked because his point totals have dropped. But when you look a little deeper, you might start to get an idea as to why his production has sharply fallen off, and a lot of it might be out of his control.

He's never been a player who you can count on to be a big-time goal-scorer. What he is, though, is a playmaker. A puck carrier. He's the guy who will lug the puck through the neutral zone, beat defenders one-on-one and help his team gain entry into the offensive zone without having to give it up. In a league where puck possession is king and the ability to enter the zone with control of the puck is nearly twice as important as dumping it in, that is not something that should be overlooked.

What has changed for him over the years isn't necessarily his ability to score -- it's that his teammates haven't been able to score. Over his last three years with the Oilers, his linemates combined to score on just 6.9 percent of their even-strength shots with him on the ice, a factor that has no doubt cut into his assist totals. Did a player who used to routinely average between 40 and 50 assists per season just suddenly forget how to set people up? Or does it have a little something to do with who he's been used with and, perhaps even, who he's been used against.

Here, via Behind The Net, are his quality of competition and teammate numbers over the past seven years.

Unless you're Wayne Gretzky or Mario Lemieux, it doesn't really matter how good of a playmaker you are if you're playing alongside guys who can't score. And once you dish the puck off to them, what they do with it is out of your hands. Get him back with players who can finish and have some offensive ability (as he was with Ottawa at the end of this past season) and you might see a different player.

There are a lot of players in free agency teams should shy away from: The player coming off the career year whose value is at an all-time high. The player who is known more for his "toughness" and leadership than anything he actually does on the ice. Goalies seeking big contracts.

But the talented guy who can help your team control the puck and pace of the game and has been stuck in a rotten situation for a couple of years?

That's the guy you might want to take a chance on.