Why nobody cares about the NHL Draft

We don't know the players and they probably won't play for our teams for years, if they ever make it. It's really hard to care about the NHL Draft unless you're a total diehard.

Share All sharing options for: Why nobody cares about the NHL Draft

We're now just a few days away from the 2014 NHL Draft, and large swaths of hockey fandom have turned their attention to junior hockey, prospects and draft-related rumors.

But as the NBA Draft approaches in almost-perfect parallel with the NHL's version, it's hard not to notice the difference in overall interest, buzz and excitement. And this isn't just because the NBA is a more popular league, or because I live in the United States, or whatever else might make me see a difference.

The NBA Draft is a machine. The NHL Draft is ... well, let's just say we're lucky they even broadcast the second day.

This quote from Bob Rotruck -- he's the broadcaster for the AHL's Lehigh Valley Phantoms, top affiliate of the Philadelphia Flyers -- speaks volumes about just how hard it is to care about the NHL Draft.

Flyers draft picks this weekend will mostly be long ways away from joining pro ranks. 2014 Draft will have some 2016 rookie Phantoms players

Or this one from Rob Farr, the NHL's director of Central Scouting:

"There may not be the top line guy right away or the top one or two D-men who will come out of this draft, like there have been in past drafts."

We want immediate satisfaction out of the draft. We want our team to draft some kid that will step in and help us win the Stanley Cup immediately. It happens in other sports. It often doesn't happen in hockey, and even less so this year.

That, in a nutshell, is why the NHL Draft does not have the same appeal as say, the NBA Draft or the monster that is the NFL Draft. That's why a Friday night Disney Channel broadcast of Phineas and Ferb drew 18 times more viewers than the first round of the 2012 NHL Draft.

In each of those other sports, the majority of players selected will not only play in the league, but they'll often do it nearly immediately. First-round picks in the NBA and NFL are just about guaranteed to make their teams the following year, giving anybody interested in their teams a huge reason to learn about these kids before the draft and actually watch the event on TV.

It's really a giant lottery ticket

Once you get past the top picks, the NHL Draft becomes a giant lottery ticket. The best way to win is to give yourself the most chances.

It's really a giant lottery ticket

The NHL Draft just isn't the same. In a typical year, the top 10 guys might make an immediate NHL impact if they're lucky, and even then, it's not a top-line starring role. They are merely depth.

Big roles rarely come at age 18, and for most highly talented prospects don't come until age 21 or 22, at the earliest. It's not rare for a high-end prospect to go three or four years in the NHL without being the best player on his own team, let alone one of the best in the league. It happens, but it takes years, and a million things can change -- or in other words, go wrong -- before a top draft pick actually fulfills the potential he had when selected as an 18-year-old.

Hockey is in many ways the ultimate team game, in which even the world's best player won't transform your team into an immediate contender. It took Sidney Crosby, Evgeni Malkin, Marc-Andre Fleury (all top-3 draft picks) AND a strong supporting cast to get the Pittsburgh Penguins to the Cup Final, and it took years before they could do it. It's just not that easy in the NHL, and stockpiling top draft pick after top draft pick doesn't necessarily guarantee success. (Hi, Edmonton.) A high draft pick isn't a magic wand.

The Kings are Stanley Cup champions for the second time in three seasons, and have been a model franchise in the salary cap era.

Successful teams utilize the NHL Draft well, but even for a team like the Los Angeles Kings, who have in many ways built their budding Stanley Cup dynasty through the draft, only 12 of the 23 players on their active roster during the Stanley Cup Final came up through their system via the draft. Since 2005, the Kings have drafted 70 players, and only 22 of those players have made it to the NHL at this point.

It's exciting if you get a player like Anze Kopitar (drafted in 2005) or Drew Doughty (2008) in the draft, but it took years of steady building to turn the Kings into champions. The Kings weren't even a playoff team with Doughty and Kopitar until the 2009-10 season. It took a slow and steady climb through years of strong drafting, slick trade manuvering and the occasional hole-plugging through free agency to build the Kings, who have deftly become the blueprint for salary cap era team building.

We don't know who these guys are

Beyond that, there's the familiarity factor. Aaron Ekblad is no doubt a very, very good young defenseman, but how many people have seen him play? How many people can attest to how good a defenseman he is? (And no, watching YouTube clips doesn't really count.) 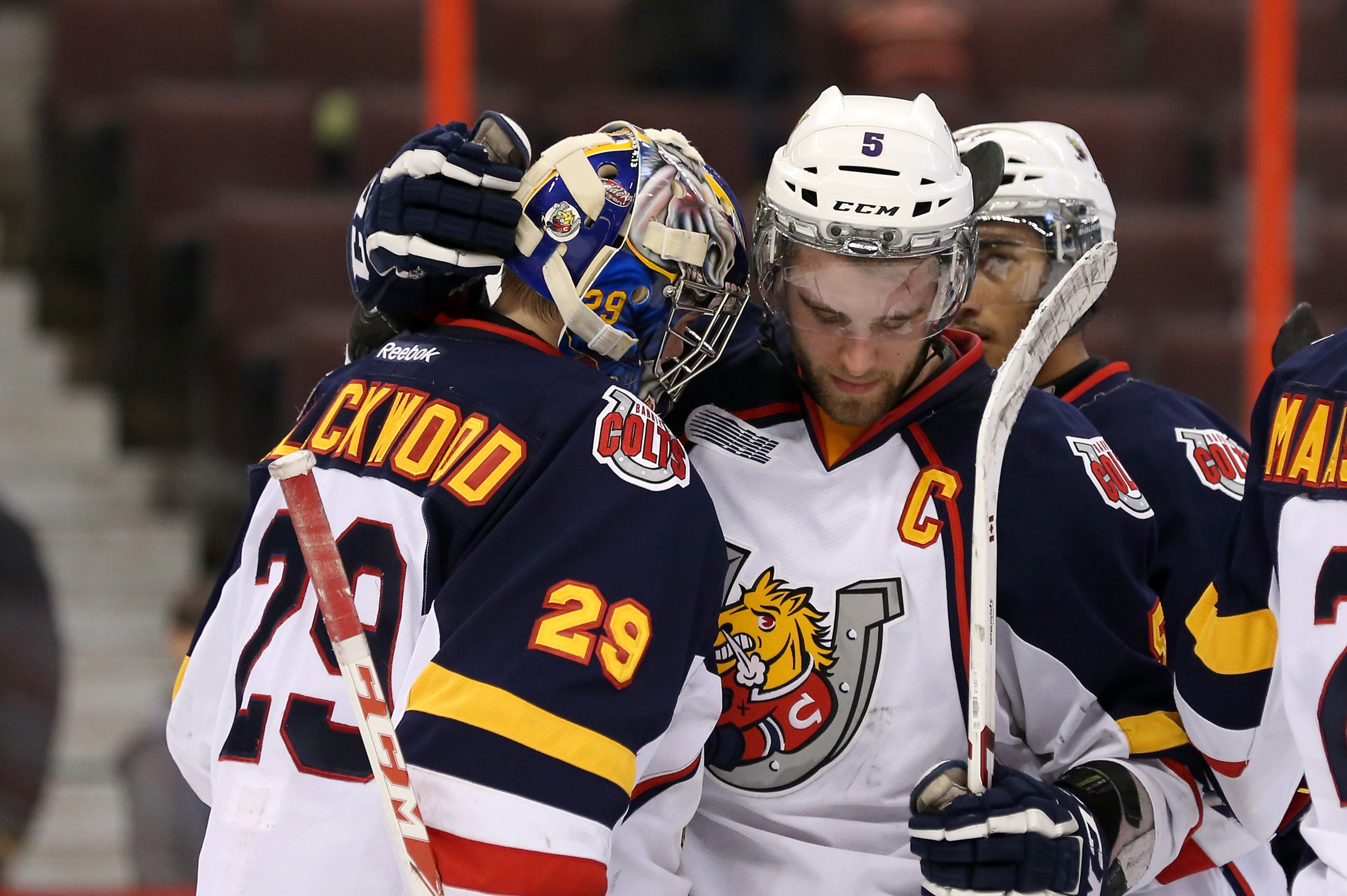 Ekblad's on the right, by the way. (Getty)

Ekblad's Barrie Colts play in the Ontario Hockey League. OHL games are played in front of fewer than 10,000 people -- in most cases fewer than 5,000 -- and while some games are on television across Canada, most junior hockey fans in Western Canada or Quebec are watching their own leagues on Friday and Saturday, not the OHL.

There are plenty of people who follow the OHL or the QMJHL or the WHL obsessively, but the number of fans who are honestly, truthfully familiar with top prospects across all three leagues can probably be counted on your appendages.

Then you have the American audience, for whom it's nearly impossible to get a good glimpse at a junior player like Ekblad, or for that matter, even a player the caliber of Crosby during his junior days. A select number of games are available on NHL Network, a channel nobody watches because it's useless for 90 percent of the average day. International tournaments like the World Juniors are our best bet, and those are tiny little 10-game samples.

And major junior players are the most visible of all NHL draft prospects, at least to North American audiences. There are huge groups of prospects who play in European leagues -- mostly second- or junior-tier leagues, to boot -- who we, again, never have the chance to see play consistently until a tiny stretch during World Juniors each year.

What about college? The NCAA hockey talent stream is an ever-growing source for the NHL, but the vast majority of players are drafted before they even step foot on college ice. Johnny Gaudreau was a Calgary Flames pick in the fourth round of the 2011 NHL Draft, selected from the Dubuque Fighting Saints of the United States Hockey League. Nobody — and we say that with all due respect to the fine hockey fans of Dubuque, Iowa — knew who the hell he was until well after he was picked, once he started tearing up Hockey East with Boston College the following season.

Compare this with NBA or the NFL, where we get to watch top draft prospects on national television for literally years before they're selected in the draft. College football and college basketball are huge business with giant fan bases in their own right, and the drafts in those leagues are points of pride for those massive collegiate fan bases.

People know college athletes in these sports. You don't even have to be a football fan to have heard of Jadeveon Clowney or Johnny Manziel before the 2014 NFL Draft, and you've probably seen them once or twice in passing on SportsCenter at the very least. Those guys are followed and covered for years by huge groups of people before their names are called on stage at the draft. It's just not the same story with junior hockey prospects.

But even if you've never heard of the NBA or NFL picks, you have every reason to follow along and get to know them, because as soon as they pull on that cap they become millionaires and impact athletes. About four months from draft day you're going to be watching them on Sunday afternoons. They might just help your team win a title.

Can any team in the NHL say that about the guy they'll draft on Friday night in Philadelphia?