It doesn't take much to lose the attention of the New York sports fan. Now the Rangers are trying to win it back.

It isn't just that it took the New York Rangers two decades to get back to the Stanley Cup Final. It's what has happened since 1994 that pushed them off the back pages and out of the forefront of New York's sports consciousness.

When the Rangers last reached the Stanley Cup, they weren't the only New York team worth celebrating. The Knicks -- the Blueshirts' Madison Square Garden co-tenant -- also reached the Finals that year. The Rangers pulled out a championship in seven games against the Vancouver Canucks, while the Knicks fell in a Game 7 to the Houston Rockets.

The city's attention was divided between the two Manhattan marvels, but the Rangers came away with the eventual parade and grand accolades.

And then, for 20 years, the Rangers not-so-slowly slipped into obscurity.

Since 1994, when Mark Messier made his Game 6 guarantee and the Rangers went on to hoist Lord Stanley's trophy, a lot has happened in the five boroughs. The Yankees have won five times, and the Giants have won twice. Heck, even the Mets made it to a World Series before falling victim to those same Yankees. The Knicks have ... well, they're still the Knicks.

But basketball is part of New York's culture, making the Knicks' success somewhat of a hopeless romantic fantasy in spite of their ineptitude. The Yankees are untouchable, and the football Jets and Giants have cornered a blue-collar audience. The Blueshirts have had to play little brother to the other franchises of the city.

Each misstep has occurred with unique, painful subtext. The year after making that Cup run in '94, more or less the same cast of characters bowed out to the arch-nemesis Philadelphia Flyers in the second round. That was followed by another second round exit before the team decided to make a grand push at another championship by acquiring Wayne Gretzky. But a lackluster regular season ended in a loss in the Conference Final, again to the Flyers, and then, things really went south.

Messier bolted from Broadway during the summer of 1997, signing a contract with the Canucks and taking his name off the Big Apple marquee for the next three seasons. Messier would return to New York in 2000, but by then, the Rangers were already in a landslide.

Slowly, the pantheon that guided the Rangers to mid-90s glory began to crumble. Messier, Brian Leetch, Adam Graves and Mike Richter were all at the twilights of their careers. The Rangers were a win-now franchise that managed to navigate glory once, but then never again with the same roster. From 1997 until the 2004-05 NHL lockout, the Rangers went seven seasons without sniffing the postseason.

The Rangers were big-time buyers, but from Broadway to Wall Street, the stocks crashed. New York brought in the likes of Eric Lindros, Bobby Holik and Pavel Bure to right the ship, to no avail. An heir for Richter was never found, and the goalie struggled with concussions late in his career. Dan Blackburn, originally thought to be the new franchise netminder, was forced to retire due to a nerve issues in his shoulder. It was a comedy of errors that had no end in sight.

Another midseason trade with the Columbus Blue Jackets has helped put the Los Angeles Kings back in the Stanley Cup Final.

After the NHL cancelled the 2004-05 season, the Rangers finally made it back to the playoffs the following year. It was on the stick of Jaromir Jagr that New York finally made it out of the regular season, but they were swept away by the New Jersey Devils in Round 1. Aside from Jagr, another new face that season was an unknown Swedish goalie who was selected in the seventh round of the 2000 Draft. He quickly got sick of losing to Martin Brodeur.

(It was also pointed out to me that in the year after the lockout, the Rangers along with three other teams shared the top odds in that year's draft lottery, which featured the likes of Sidney Crosby and Anze Kopitar. The Rangers ended up drawing the 16th pick and ultimately traded up to 12th, selecting defenseman Marc Staal.)

Though the Rangers began to consistently make the playoffs again, they fell into a rut. They were improving, but only marginally, and still had a very mediocre supporting cast, with Jagr complemented by the likes of Martin Straka and Michael Nylander. After Leetch left in 2004, the franchise struggled to find a true cornerstone defenseman, and instead cycled through the likes of Darius Kasparaitis, Marek Malik and Tom Poti.

The blockbuster summer of 2007, when the team signed Chris Drury and Scott Gomez a decade after Messier unceremoniously left, amounted to a dud. Both players failed to deliver on expectations, although some may argue that Gomez's career in New York should be viewed more favorably because he inexplicably was traded for Ryan McDonagh.

Over the last two decades, there was a Hossa (but not Marian, rather, Marcel), a Fedorov (not Sergei, but Fedor), the tire-fire that turned out to be Wade Redden, and players like Ryan Hollweg, Jed Ortmeyer and Thomas Pock, all names that will surely make the skin crawl on Rangers fans.

The return to the back page

This season, the eighth in the last nine in which the Rangers have made the postseason, the Blueshirts have finally made it back to the Stanley Cup Final under the strangest of circumstances. It began with hiring a new head coach, and then a 3-7 start made grimmer by injuries to Rick Nash, Carl Hagelin and then-captain Ryan Callahan. Henrik Lundqvist, at times, looked more like a seventh-round unknown than a franchise goalie in a contract year. 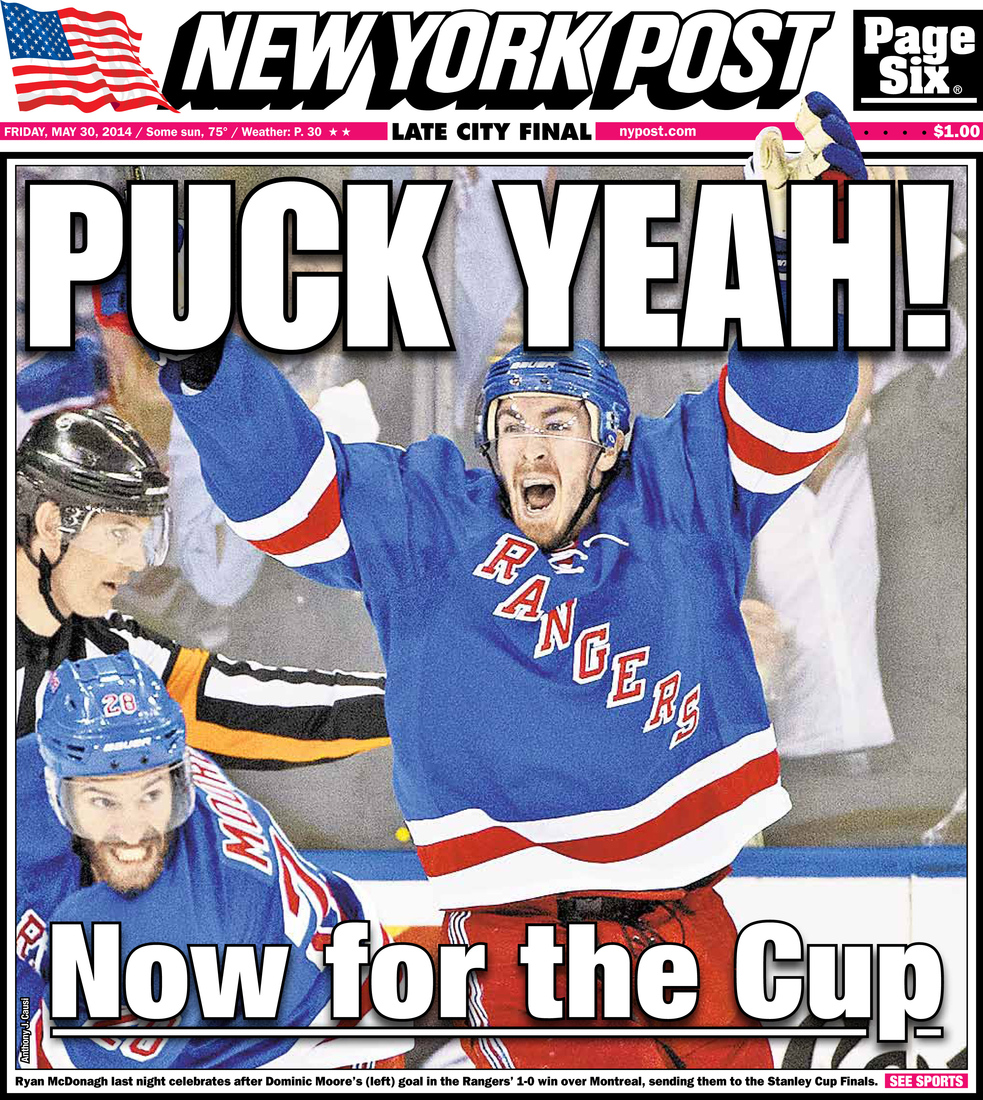 But the script quietly began to change. Lundqvist was extended with a massive seven-year contract worth $11 million per season, and he responded in typical Lundqvist fashion. Callahan was traded for Martin St. Louis, a player whose personal loss during the playoffs has galvanized the Rangers locker room.

The show isn't complete. If the Rangers falter against the Los Angeles Kings in the Cup Final, the Rangers will slip back into the obscurity they have so comfortably lived the past two decades. But should they win, this Rangers team will capture the city's first trophy in any sport since 2011. That's not a long drought by any stretch, but it's an eternity for an impatient town that can't even wait for a train, let alone a title.

Win, and it'll be a lot harder to keep ignoring the New York Rangers.