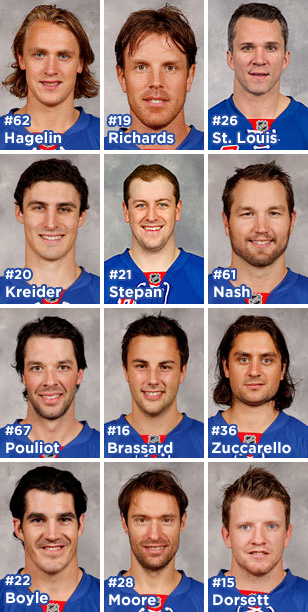 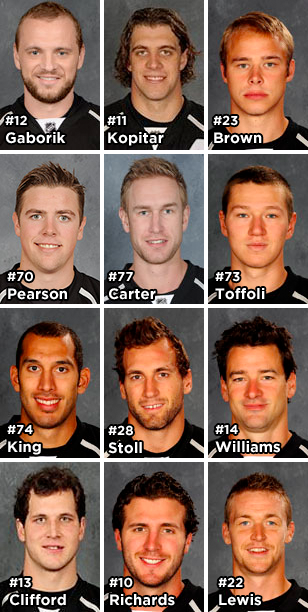 Depth is crucial to a long playoff run, and both of these clubs are deep at the forward position.

The Kings, who finished the regular season just 26th in the league in G/G (2.42) have been scoring at a ridiculous pace -- lighting the lamp 3.48 times per game in 21 postseason contests. 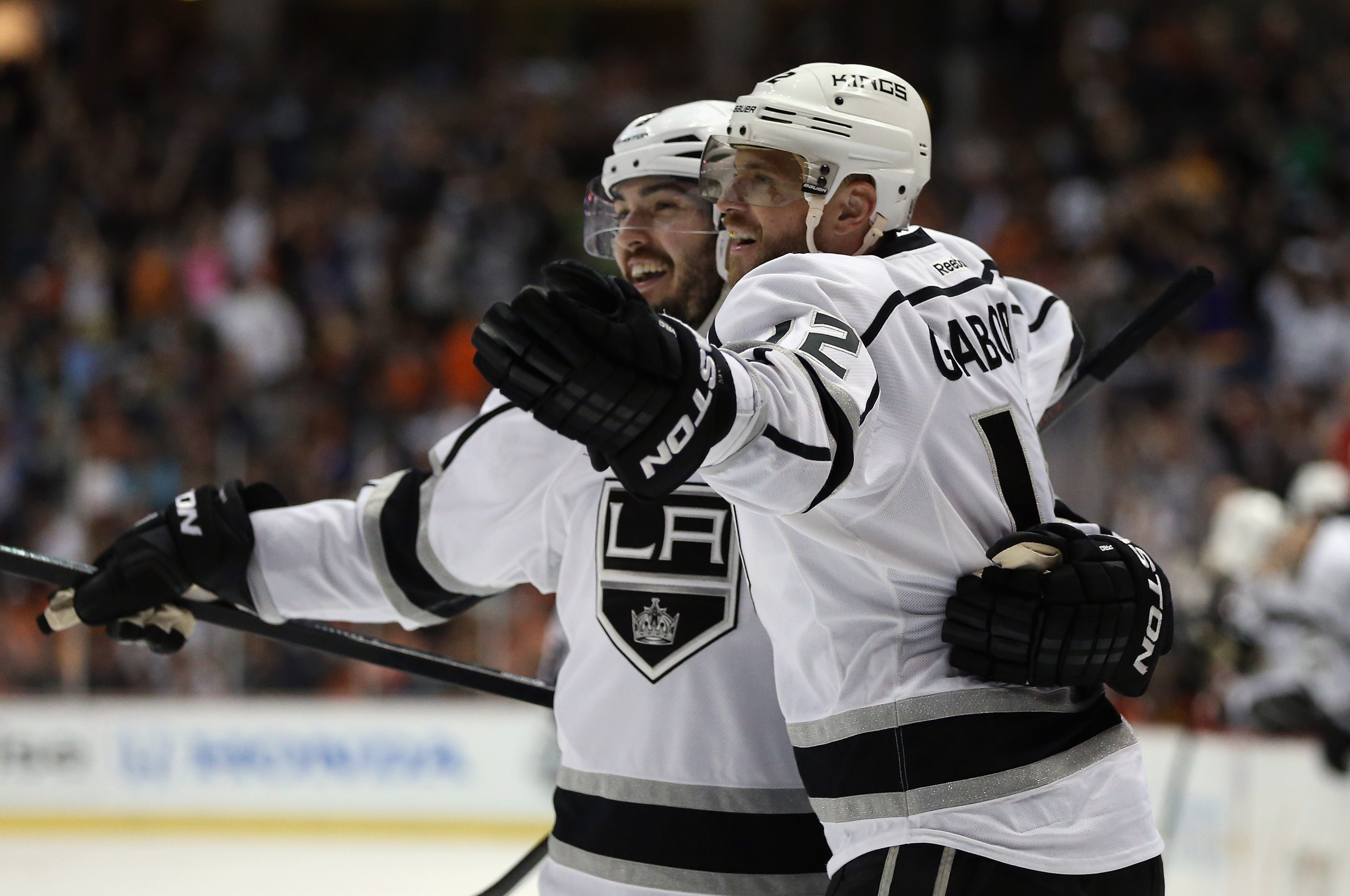 Another midseason trade with the Columbus Blue Jackets has helped put the Los Angeles Kings back in the Stanley Cup Final, this time with an offense that's turned potent seemingly overnight.

The one caveat here is that some of the Kings’ forwards have benefited from unusually high shooting percentages over the last month and a half. This is normal in the playoffs, as small samples tend to create screwy numbers, but it also raises the question: can LA keep it up for one more series?

This is a question directed at Marian Gaborik more than anyone else. Gaborik, who was acquired from Columbus at the deadline, is leading the NHL with 12 playoff goals, scoring on 18.5 percent of his shots. It’s quite possible that he keeps up (or at least come close to matching) his current output; however, a noticeable drop in production wouldn’t be all that surprising -- especially when we consider the goaltender he’ll be facing.

As history frequently reminds us, there’s only so long a guy can maintain an inflated S%, and whether or not Gaborik’s inevitable regression takes place now or next season could have a major impact on this series. How he fares against his former club will be one of the more interesting subplots of the final.

Aside from Gaborik, several other Kings have really stood out during the playoffs, namely Anze Kopitar -- the best skater on either side.

Kopitar is not only scoring more than a point per game (5 G, 19 A), he’s doing so while taking on lots of tough minutes, as well. He’s provided more overall value than just about any other player this postseason, and a few more strong games should land him the Conn Smythe trophy.

Then there’s Justin Williams, Mr. Clutch, whose 18 playoff points have been vital to LA’s success -- particularly the five points he’s racked up in three Game 7s.

Of course, Gaborik, Kopitar and Williams haven’t done it all alone. The trio of Tanner Pearson, Jake Muzzin and Alec Martinez have combined to score 13 goals, and the ever-reliable Drew Doughty has provided a nice offensive punch from the blueline with 16 points (4 G, 12 A), tops among all defensemen.

Don't Count Out The Rangers 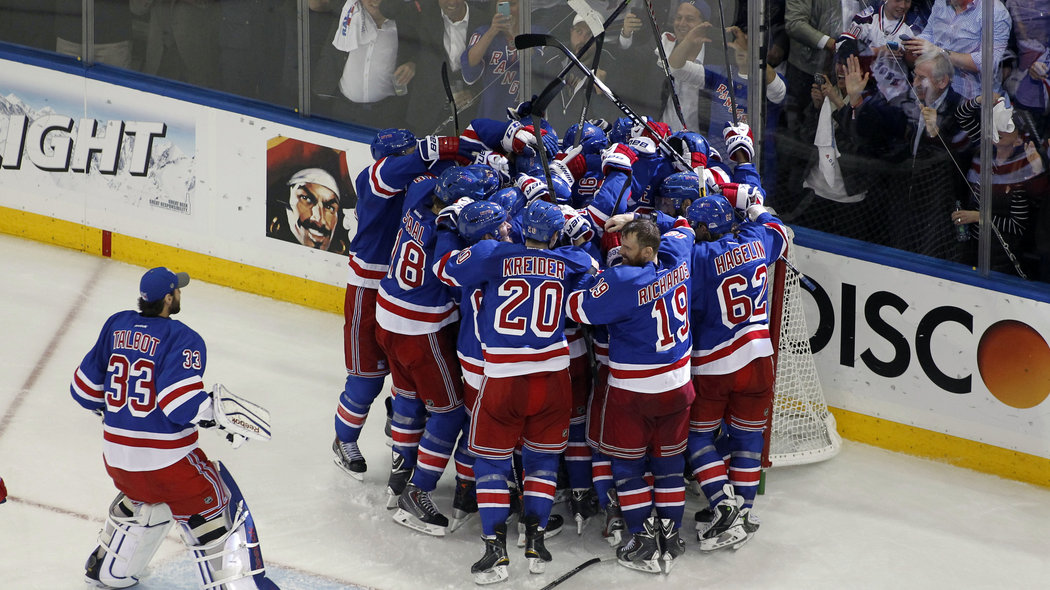 Before you hand the Stanley Cup over to the Western Conference champion Kings, just remember that the New York Rangers have Henrik Lundqvist and nobody else does.

New York’s offense hasn’t been as lethal as Los Angeles’, but it certainly hasn’t been a weakness. With the ability to roll four solid lines, the Rangers have been able to win with consistency -- never blowing anyone away, but never falling into a slump, either.

Perhaps most importantly, Martin St. Louis has snapped out of the funk he experienced upon joining the Blueshirts in March -- notching six goals and seven assists in the playoffs thus far, tying him for the team points lead with Ryan McDonagh and Derek Stepan.

Despite New York’s well-rounded depth chart, the edge here has to go to Los Angeles. There are many ways to justify this sentiment, but simply put, the Kings are scoring at a much higher rate than the Rangers.

However, given the goaltending situation on both sides and some of the aforementioned factors, it wouldn’t be shocking to see New York’s steady attack outperform an LA group that may be due for a bit of a decline.

The battle on D may come down to Drew Doughty versus Ryan McDonagh. Both offensively gifted yet sound in their own ends of the ice, the two young rearguards should be out there for almost half of every game.

We know what to expect from Doughty, who thrives under pressure as well as anyone. McDonagh, though, is a lesser known commodity. 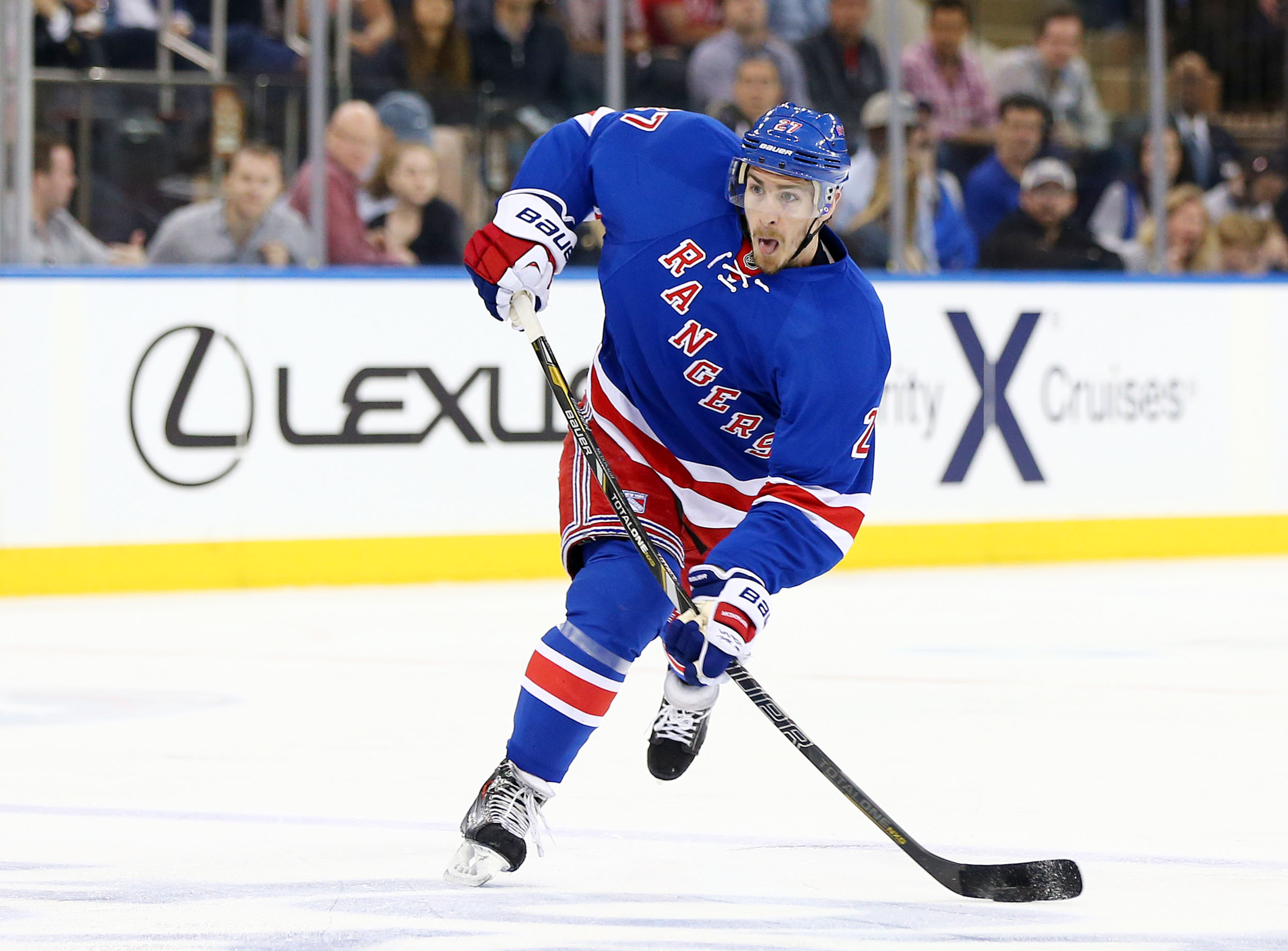 At just 24 years old, McDonagh is blossoming into one of the more exciting D-men in the league. Down the road we may look back at the Eastern Conference final as his coming out party: he earned 10 points (2 G, 8 A) in six contests, one of which helped set up Dominic Moore’s winning tally in Game 6 to clinch the series.

Beyond those stars, the two bluelines remain, for the most part, evenly matched. The pairing of Marc Staal and Anton Stralman will be tasked with slowing down Los Angeles’ secondary scoring, and Willie Mitchell/Slava Voynov will be given the same assignment by head coach Daryl Sutter.

The Rangers’ No. 2 pair is probably a little better than the Kings’, as Staal and Stralman have faced tougher minutes and posted better shot differentials than Mitchell and Voynov.

Here’s a visual representation of how both teams’ top four have been deployed/performed through the first three rounds: 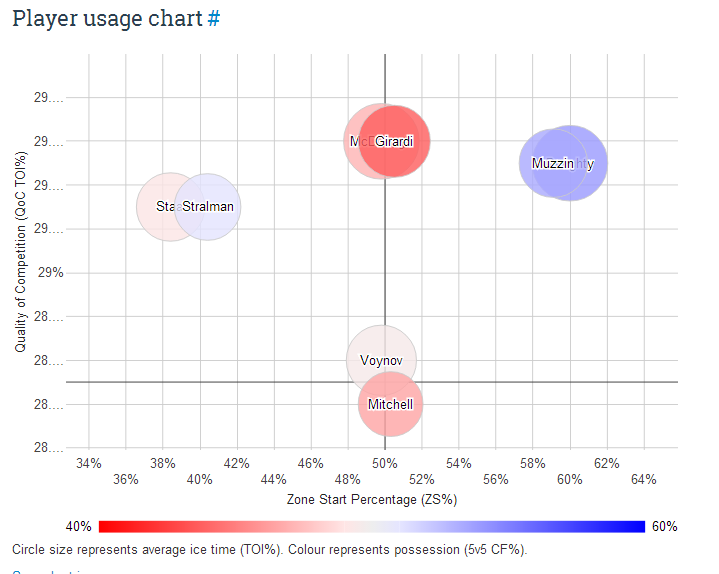 Clearly, all of these duos have been used in very different ways. The one guy who really sticks out is Dan Girardi, who could be a huge liability for New York with a 43.7 percent 5v5 Corsi. How he fares against LA’s top guns is something to watch.

In the end, the slight edge goes to LA. Doughty is better and more reliable than McDonagh, and his partner, Muzzin, is a lot better than Girardi. The difference here is greater than the difference in their second pairings, while their third pairings are close to a wash.

Man, has Los Angeles been clicking on the man-advantage.

Through 21 games, the Kings’ power play has scored at a 25.4 percent clip, best of all conference finalists. What makes this unit so lethal is the sheer number of ways it can beat you: Doughty is a constant threat at the point; Dustin Brown and Jeff Carter wreak havoc near the crease; and Gaborik and Kopitar use their God-given talent to create offense along the boards, in the circles and in the slot.

That said, the Kings’ penalty kill isn’t exactly elite. Los Angeles has survived just 81.2 percent of short-handed situations, which isn’t terrible, but it doesn’t instill a lot of confidence.

That low conversion rate could allow the Rangers to find a much-needed spark during 5-on-4 situations. New York’s power play has been rather pedestrian throughout the playoffs, scoring just 13.6 percent of the time. These struggles can be partially attributed to a 0-for-36 slump in the early rounds, but there hasn’t been a whole lot of progression since that streak.

The Rangers’ penalty kill will have its hands full, but there’s reason to believe it can slow down LA’s lethal attack. New York’s 85.9 percent PK is higher than any other team that advanced beyond the first round.

Those who decry advanced stats needn’t look further than this match up to realize how valuable Corsi and Fenwick can be -- at least in proper context.

Though neither of these teams came close to winning division championships (let alone the President’s Trophy) they both excel in terms of shot differential, and that’s why they’re here. LA and New York completed the 2013-14 regular season first and sixth in 5v5 FenClose, respectively, which is a metric known for its predictive value.

The Rangers have swiftly turned into a possession team under Alain Vigneault, which has been a nice transition from John Tortorella’s archaic brand of hockey, but the Kings still hold a distinct edge in this regard.

You can chop this up in many different ways, but there's only one logical conclusion.

In many cases it’s unwise to put too much too much stock in playoff stats, as the small samples coupled with stiff competition make for some hazy results. But the Kings faced far tougher opponents in the first three rounds than the Rangers, so the fact that LA enters the final with better underlying numbers says a lot.

Here’s where the Rangers can beat the Kings. Though Jonathan Quick has a Cup championship and a Conn Smythe trophy under his belt, Henrik Lundqvist is a far better goalie right now.

Yes, Lundqvist has had playoff issues in the past, but this has not been the case in 2014. The veteran Swede leads all goalies with a .928 postseason save percentage, which makes Quick’s .906 mark appear mediocre in comparison.

Lundqvist only got better throughout May, surrendering two or less goals in seven of his last nine. Quick, meanwhile, has allowed three or more in five of his last seven.

If Quick continues to struggle, and if the bounces can go in New York’s favor -- if only slightly -- Broadway could very well enjoy its first Stanley Cup parade in 20 years.

Undoubtedly, Lundqvist is capable of stealing this series, and he'll probably have to carry the Blueshirts on his back at least twice to make that happen. That will be difficult, yes, but if there's anyone out there who can pull it off, it's the guy standing in the Rangers' crease.

If not, the Kings will move one step closer to forming a modern-day dynasty.