A disappointing playoff performance hit rock bottom for Dan Girardi in overtime of Game 1 of the Stanley Cup Final.

Would they be able to find a way to keep both? Would they trade one? Would they do the unthinkable and trade both as they headed into the playoffs?

In the end, they ended up trading Callahan to Tampa Bay for Martin St. Louis and re-signing Girardi to a massive six-year, $33 million contract extension. The former has worked out quite well, as St. Louis has given an already-solid team another top-line scorer. It made the Rangers a Stanley Cup contender in a wide-open conference that was there for the taking. Even though it took St. Louis a while to put up points like he was in Tampa Bay, he's had his moments in the playoffs, particularly at the tail end of the Pittsburgh series and in the Eastern Conference Final against Montreal.

Girardi, on the other hand, has been a bit of an adventure in the playoffs.

Things reached a low point in Game 1 of the Stanley Cup Final when this turnover deep in the defensive zone in overtime led to Justin Williams' most recent game-winning goal.

That play will make all of the highlights and be one of the talking points heading into Game 2, but it's far from the only problem Girardi has experienced in the playoffs.

For years Girardi has been one of New York's most reliable defensemen and a staple alongside Ryan McDonagh. But from an objective point of view, his postseason performance has been one of his worst stretches over the past few years.

He is currently plodding along with a 44.1 percent shot attempt (Corsi) percentage this postseason, placing him 115th out of 130 players that have appeared in at least 11 playoff games. Among defensemen, he is 40th out of 43, ahead of only Francois Beauchemin (Anaheim), Bryan Allen (Anaheim) and Mike Weaver (Montreal). For a player that's been a 50percent possession player over the past three years, that is a noticeable drop. When Girardi is on the ice this postseason, the Rangers are giving up a lot more shots than they're generating.

If you break it down to his last 10 games, that possession number drops all the way down to 42 percent. When you're talking about a defenseman that's playing more than 23 minutes a night in the Stanley Cup Final, that's a problem.

But let's take it one step further and look at his possession numbers in rolling 10-game segments dating back to the start of the 2011-12 season.

The red portion of the line represents this year's postseason numbers, and it should probably be accompanied by a loud crashing sound. 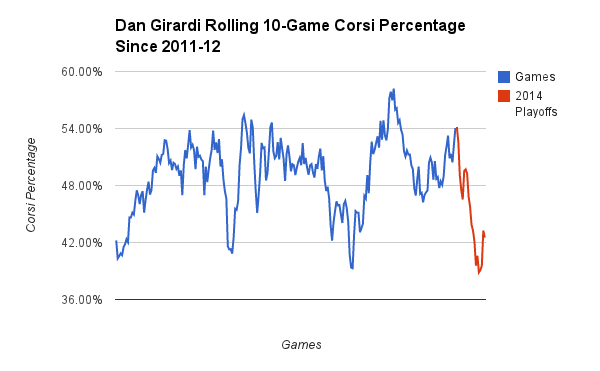 The good news is that over the past three years he's had stretches where his possession numbers have cratered just like they are right now -- including one stretch in the 2012 playoffs against Ottawa and another earlier this season. He's always followed that by a sudden climb in the right direction. It seems that it may even be starting to happen once again as we speak.

All players hit stretches over the course of a season where their play fluctuates and they go through peaks and valleys, and that's true for goal-scorers, defenseman and goalies.

Lately, Girardi is stuck in a valley.

Figuring out the problem

Perhaps the most concerning development is that he's still had the luxury of playing alongside McDonagh -- the player that's been driving that pairing the past couple of years -- and has been given some pretty favorable zone starts this postseason (51 percent of his shifts that start with faceoffs begin in the offensive zone), especially in the early rounds of the playoffs.

Despite that more-favorable usage, his possession numbers have still taken a beating.

Let's take a look at the same chart from above, only this time let's add in offensive zone starts to see if that can tell us anything. 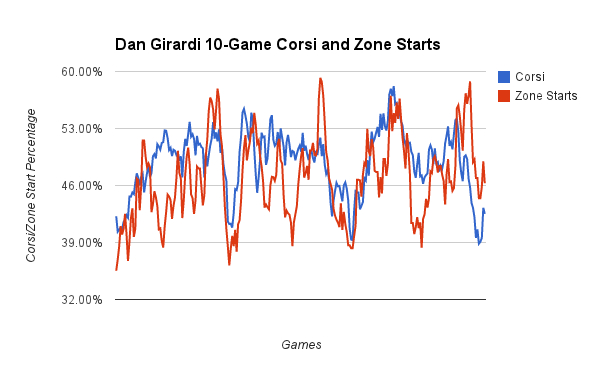 Usually, there's a pretty good relationship between his possession numbers dropping and his usage changing, and that's even true this postseason. To a point. There still seems to be a large gap in the wrong direction here and that's a bit out of the ordinary for Girardi. Even when he's been buried in his own end of the ice over the past few years, he's rarely been this bad when it comes to helping to drive play in his team's favor.

He really hasn't faced that sort of a challenge this postseason and his numbers are still taking a beating.

Girardi's postseason performance has been one of his worst stretches over the past few years.

In his defense, he is still typically going up against the other team's best players. The 10 players he's seen the most ice-time against this season have been as follows (ranked in order of ice-time): Kris Letang, Paul Martin, Sidney Crosby, Claude Giroux, Chris Kunitz, Evgeni Malkin, Jakub Voracek, Scott Hartnell, P.K. Subban and Brendan Gallagher. Obviously, those are some tough minutes that he's logging, and most players will see their performance drop a bit when they're going up against that group every night for more than a month.

But facing tough competition isn't really a new development for Girardi -- over the past three years he's played some of the hardest minutes in the league -- and as long as he's paired with McDonagh he has usually managed to hold his own against them.

The first thing we usually point to when a typically productive player hits a rough patch in the postseason is an undisclosed injury. And Girardi has definitely looked a little off at times, especially in Game 1.

Before the turnover in overtime, he was torched by Tyler Toffoli late in the third period to create this scoring chance that very easily could have been the game-winner.

Doesn't he just looks painfully slow right there? Girardi is never going to be confused with Drew Doughty or Erik Karlsson when it comes to skating ability, but he didn't even present a challenge for the Kings' forward.

Fortunately for Girardi, Henrik Lundqvist was able to bail him out that time. He wasn't as lucky in overtime.

No one is immune to lengthy down periods

Sign of a problem? Or the type of slump that every player in the NHL experiences at least once every season?

No one is immune to lengthy down periods

Sometimes we have a tendency to put too much weight on what see in the playoffs, and we have to be careful not to overreact to a rough 10-game stretch (or one bad turnover in a Stanley Cup Final game) when every player in the league will go through them at some point.

But whether it's due to an injury we don't know about or simply the result of a slump at the worst possible time, Girardi simply has not been himself in the playoffs. If you were to rank the Rangers' most reliable defensemen this postseason, he's way below McDonagh, Marc Staal and the criminally-underrated Anton Stralman.

That is going to have to change if they have any hope of winning four of the next six games, especially if they're going to keep running him out there for more than 23 minutes a night against Los Angeles' best players.