With Jonathan Toews and Patrick Kane signed to big-money contracts, the Blackhawks have an uphill battle surrounding them with enough talent to win another Stanley Cup. How have other teams fared with multiple big-money stars?

Share All sharing options for: Can NHL teams succeed with 2 big-money star players?

When Chicago announced it had extended Jonathan Toews and Patrick Kane through the through 2023, the Blackhawks made a serious commitment to their two All-Stars.

It was a decision that wouldn't have carried such broad team-building implications back before 2005 when the salary cap was implemented in the NHL. But now, in devoting so much money to just two players, Chicago's risk is two-fold:

Before 2005, none of this mattered. Wayne Gretzky and Mark Messier. Mario Lemieux and Jaromir Jagr. Sergei Fedorov and Steve Yzerman. Joe Sakic and Peter Forsberg. All hockey power couples. Their organizations also didn't need to worry about signing their stars and still keeping enough money around to fit supplemental talent under the salary cap. All of those duos also won Stanley Cups.

But since '05, the results haven't been as conclusive when it comes to "Big 2s." For teams that have delegated least a quarter of their annual salary cap to only two players, success in the form of a championship has been hard to come by. 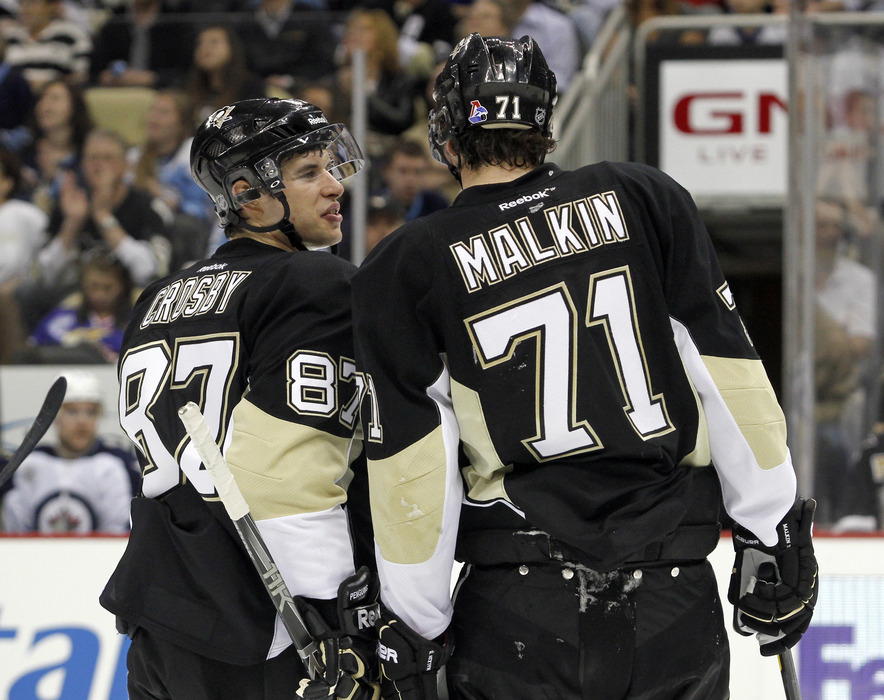 The Penguins hit draft lottery gold twice, getting quite possibly the best two players on the planet in Sidney Crosby and Evgeni Malkin. Pittsburgh is no stranger when it comes to struggling to put talent around its pair of superstars, tinkering and toying with a cast of characters to skate along the two franchise players.

It was unsuccessful enough in recent years that it cost general manager Ray Shero and coach Dan Bylsma their jobs.

Many will also point to Crosby and Malkin as validation that teams can succeed while devoting such a large percentage of their annual salary cap to two players. But there's a huge problem there: When the Penguins won a Cup in 2009 with both Crosby and Malkin, the latter was still on his entry-level contract, earning just $850,000 against the cap. Crosby was in the first year of a five-year, $43.5 million deal. The offseason after that championship run, Malkin signed the same exact contract as Crosby, and the Penguins haven't been back to the Final since.

Crosby and Malkin will make a combined $18.2 million against the cap next season, or over 26 percent of Pittsburgh's spending. 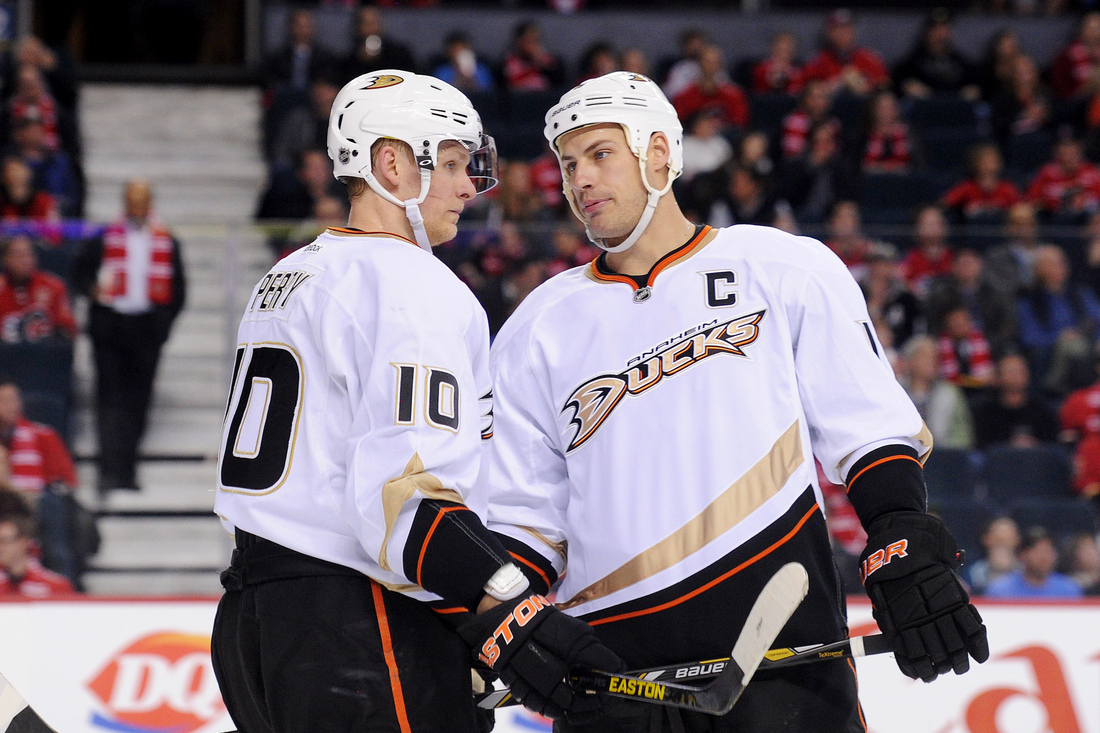 The 2003 Draft proved to be a good one for Anaheim, as the Ducks (when they were still Mighty) managed to snag both Corey Perry and Ryan Getzlaf in the first round.

The duo was part of the Ducks' 2007 Stanley Cup-winning squad, making a combined $1,354,066 that year -- still newcomers to the NHL and very much not the lethal tandem they are now.

In the years after, Scott Niedermayer retired, Chris Pronger moved on and Teemu Selanne aged. Perry and Getzlaf matured into two of the better offensive talents in the league and got paid accordingly. In 2013, the pair signed on to remain in Anaheim for another eight years respectively, swallowing up $135 million in the process.

Perry and Getzlaf will make a combined $17 million against the cap next season, or just under 25 percent of Anaheim's spending. 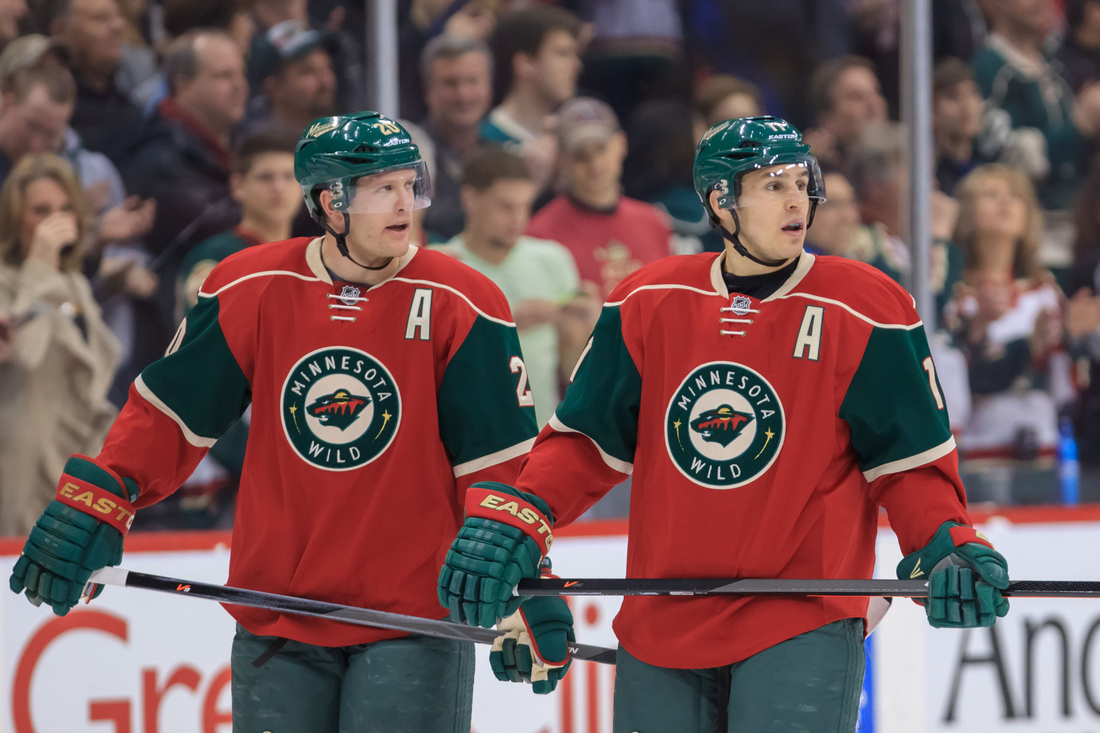 In the spirit of player collusion, Minnesota's new "Big 2" makes the list despite coming in a few points short of cracking the 25 percent threshold. But conceptually the pair fits right in with the other group, as they reportedly were in touch throughout the free agency process and decided to go the Wild together.

The major difference here is that Suter is the first defenseman on this list. While arguments have been built around some of these other duos centered around sacrificing balance, having multiple positions eat up that kind of cap space at least somewhat negates an argument for imbalance.

Suter and Parise will make a combined $15,076,924 against the cap next season, or 22 percent of Minnesota's spending.

Players with combined cap hits exceeding 25 percent of a teams' cap, since the 2004-05 NHL lockout

The argument against the Kane and Toews extensions

Chicago was put between a rock and a hard place when it came to negotiating with its two megastars. Toews and Kane have already brought two Cups to Chicago, and there was no chance Scotty, Stan Bowman and Co. were going to let either player walk away. The backlash should either player hit the open market would have been far worse than those currently saying the two were overpaid.

And they weren't. In the literal sense of the definition of "overpayment," Toews and Kane received less than they likely would have on the open market. The amount of money they're being paid is fair, and not close to what either name is worth to the franchise (although that's a different argument).

By devoting so much money to Toews and Kane, Chicago is going to need to be creative

But the most important factor to anybody -- fan, general manager, owner and arguably player -- isn't player loyalty, or simply holding onto players who once won you a Cup. It's getting back to the promised land. And by devoting so much money to Toews and Kane, Chicago is going to need to be creative to continue to carry enough depth to compete in a cutthroat Western Conference. Even if the salary cap goes up $6 million in 2015-16 to $75 million (keeping in mind the $69 million ceiling for next season was below many projections), Kane and Toews will occupy 28 percent of that space.

The good news for Chicago is that it has proven its ability to identify young talent and get good production out of less cap space. In their 2010 Cup run, the Blackhawks got good production from homegrown guys like Troy Brouwer and Dave Bolland. Three years later, Andrew Shaw and Bryan Bickell were making pretty big contributions.

Maximizing production through the draft will become more paramount to Chicago now. The next step for the Blackhawks will be moving Patrick Sharp, Marian Hossa or maybe Niklas Hjalmarsson. When the Kane and Toews extensions kick in, the Blackhawks will have more than $15 million in cap tied to three defenseman. Even if the ceiling goes up, it's unlikely they can keep that trio in Blackhawks uniforms. Corey Crawford will also be making $6 million annually through 2020.

All of this adds up to a tricky equation for those calling the shots in Chicago. There's a price to pay for keeping good players around. The biggest question the Blackhawks face is if this newest price mortgages their ability to accomplish its one true goal: win Stanley Cups.