The big-name free agents have already been bought up, but there are still a few players hanging around waiting for an offer who can help a team this season.

Share All sharing options for: The 5 unsigned NHL free agents who can still help your team

The free agent signing period in the NHL is unlike any other sport. In the NFL, NBA and Major League Baseball, player movement takes place over several weeks, and sometimes months. In hockey, general managers get together on the first day and spend all of their owner's money like it's burning holes in their pockets and then are never heard from again until training camps open in September.

It makes for a thrilling and crazy first day, and even though the next two months can be a bit of a drag, there are still usually good players to be found in the days and weeks after July 1. On July 15 we saw the Nashville Predators grab a couple of centers in Mike Ribeiro and Derek Roy for dirt-cheap contracts, while on July 22, the Toronto Maple Leafs picked up David Booth on the very same day that they may have entered hockey's analytical era.

The funny thing about NHL free agency is that the teams that end up waiting and picking over the remains can sometimes come away happier with their investment than the teams that dove head-first into the free agency pool on the first day, blowing all of their cash on winners and culture changers.

If you're a so-called "winner" and about to hit the free agent market, there is a general manager somewhere out there who has a large check with your name on it.

Overall, there were 10 forwards who signed after mid-July and still saw significant NHL ice time last season (Jagr, Grabovski, Penner, Raymond, Damien Brunner, Brenden Morrow, Radek Dvorak and Jeff Halpern). As a group, teams spent just $17 million on them and only one of them (Brunner) signed a contract longer than one year. They combined to average 1.45 points per 60 minutes of even-strength play.

The 20 forwards who were signed on the first day of free agency, a group that included top-line players like Valtteri Filppula and fourth-liners like Matt Hendricks, averaged 1.44 points per 60 minutes of even-strength play. Fourteen of them signed multi-year deals as teams committed more than $244 million in future salaries.

The point is that even though teams go wild on the first day, there are almost always similar — if not better — players available after the initial wave of signings, and almost always for a cheaper price. And in a salary cap league, or even if you're a team operating on a smaller budget, that is important.

We have already seen some teams possibly take advantage this summer, whether it be Nashville with the aforementioned Ribeiro and Roy deals, or the New York Rangers getting Lee Stempniak for $900,000 for one year after giving Tanner Glass more than $4 million over the next three years on July 1.

There still might be players floating out there in free agency who can help somebody. Let's list them.

(I'm leaving Daniel Alfredsson off the list because it seems that he is either going to play for the Detroit Red Wings or retire.)

Penner spent last season split between the Anaheim Ducks and Washington Capitals. His time with the Capitals was a bit of a disaster for all involved, but that 18-game stretch shouldn't outweigh his overall performance the past couple of years.

Even though he is no longer the type of player you would want taking a regular shift on your top line, or even your second line, he has been a very good depth player for Los Angeles and Anaheim who can chip in some offense, help keep the play moving in the right direction, and add the size that some teams still seem to love in their bottom six. 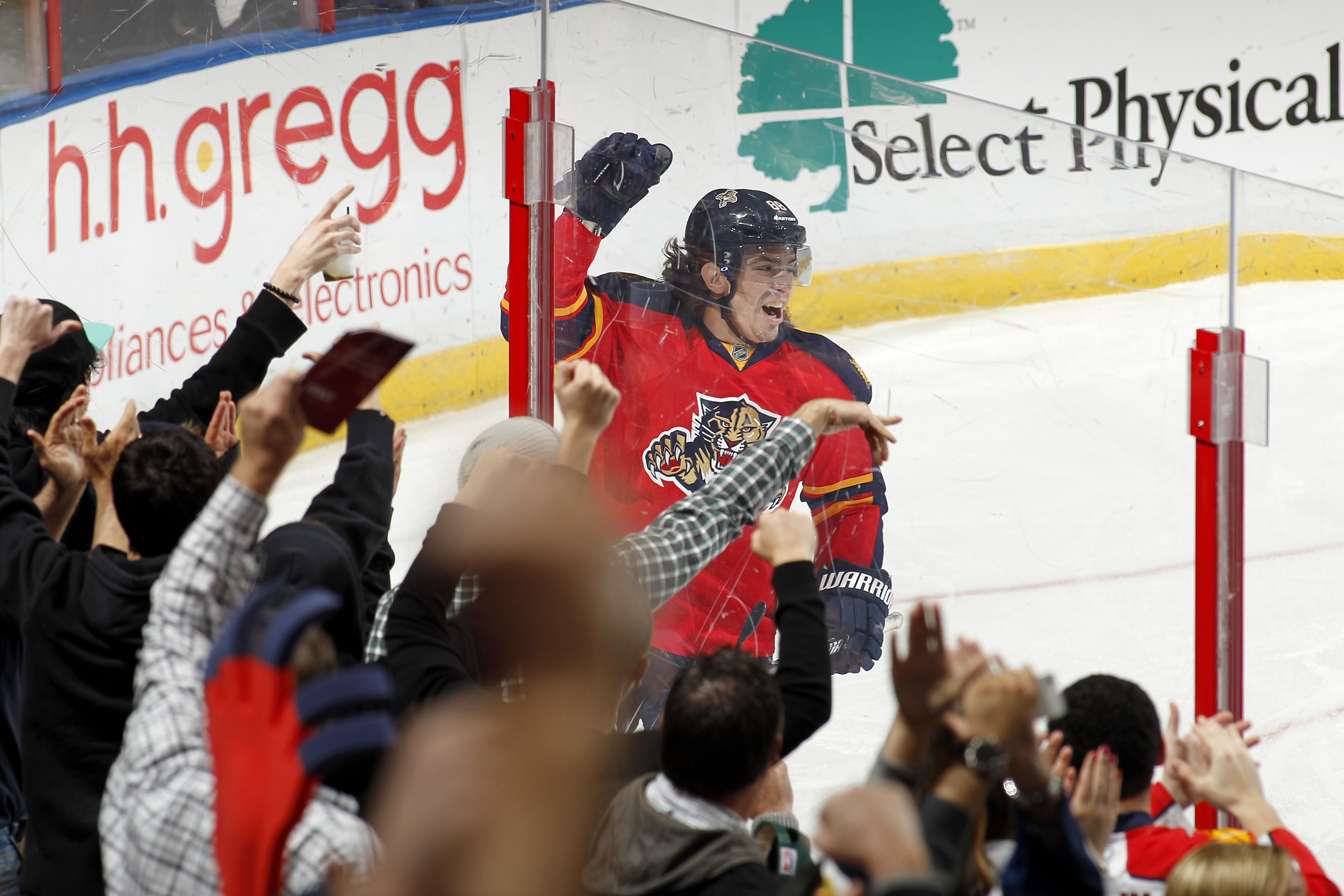 Peter Mueller in January 2013 with the Panthers (Getty)

A bit of a wild card, Mueller's once-promising career has been derailed by concussions over the years, and he has never managed to top his rookie performance that saw him score 22 goals in 81 games. He seems to be healthy again and scored 24 goals in 49 games for Kloten while playing in the Swiss League last season.

He last played in the NHL in 2012-13 with the Florida Panthers, recording 17 points in 43 games and finishing as one of their best possession players.

If Matthew Lombardi, an older player who may have had even worse concussions issues, can secure a two-year deal with the Rangers, there is no reason why somebody shouldn't be willing to take a chance on Mueller. If a team is able to catch lightning in a bottle, it may be able to come away with a potential top-six talent.

Only 24 years old, Loktionov is an intriguing player because he

While most of that was due to his time with New Jersey, he still broken even in the Corsi department in his 20 games with Carolina. The issue Loktionov has had, and one that is probably keeping him from landing a deal in the NHL at this point, is that he has yet to turn that possession into any sort of consistent scoring with just 48 points in 155 career games.

Still, given some of the other players who received multi-year, multi-million dollar deals this summer, a team could certainly do a lot worse than taking a chance on Loktionov.

Winnik isn't going to provide any sort of significant offense, but for a third- or fourth-liner he might be one of the better defensive options available, and he is still a very good penalty killer. Even though the Ducks were an average team on the PK last season, they were significantly better with Winnik on the ice than without. Anaheim gave up just 4.27 goals per 60 minutes of 4-on-5 play with Winnik on the ice, compared to 7.70 without him.

This is a tough one. At times, Del Zotto can be an absolute disaster both with the puck and without it. But he is still only 24 years old and is still blessed with a ton of offensive talent and is just two years removed from a 41-point season.

After diminishing production and constant gaffes in the defensive zone, the Rangers finally gave up on him in the middle of last season and dealt him to Nashville for Kevin Klein. The Preds saw more than they needed to see in his 25 games with the team and allowed him to become an unrestricted free agent. Like a lot of other players available at this time of year, it would be nothing more than a cheap roll of the dice, but for a team that needs a young, offensive defenseman it might be worth taking just to see if there is still something there.