Can the Penguins expect to replace James Neal with Patric Hornqvist? And how much will Neal suffer now that he is no longer playing alongside one of the best players in the NHL every night?

One of the biggest trades of the NHL offseason was the draft-day swap that saw Pittsburgh send James Neal to Nashville for Patric Hornqvist and Nick Spaling.

It was an interesting and significant move for both teams, but for very different reasons.

From a Pittsburgh perspective, it did not really do anything to solve any of the team's short-term or long-term needs. The Penguins did not save any cap space and they did not make their forward group any younger or deeper. All they did was swap a sharp-shooting winger for a net-front winger with a fringe third/fourth-liner thrown in.

For Nashville, it gave the Predators the type of goal-scoring presence they have lacked for years and was the start of an offseason overhaul to try to make the team more offensive. It's a rebuild that has included the hiring of coach Peter Laviolette and the free agent signings of Mike Ribeiro, Derek Roy and Olli Jokinen.

There is one more aspect of the deal that is worth taking a look at for the two main players, though. 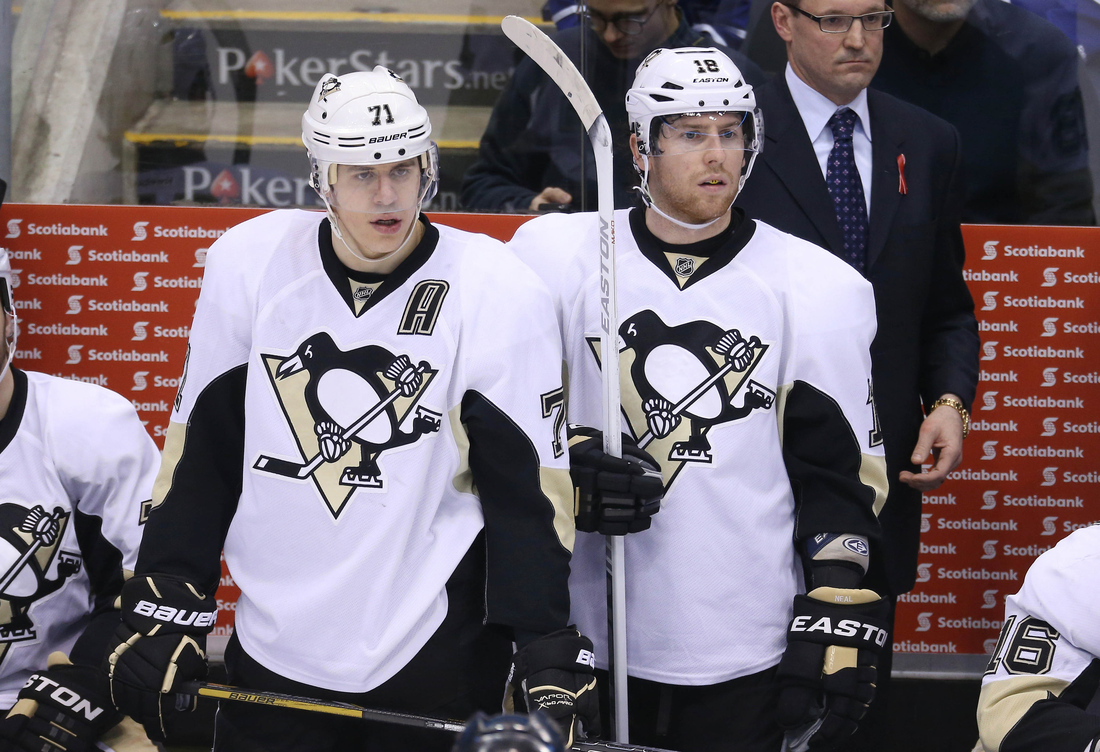 How much should we expect Neal's numbers to drop when he no longer has Malkin setting him up?

Neal did not really burst onto the scene as an elite goal-scorer until he arrived in Pittsburgh, where he spent almost all of his time skating on Malkin's wing. How much -- if at all -- should we expect his numbers to drop when he no longer has one of the best centers in the league setting him up every night? Conversely, isn't it also possible that Hornqvist, arriving in Pittsburgh and likely playing alongside Malkin, could experience a similar bump to his already productive numbers?

To try to get a better idea, here is a list of every forward who has spent at least 300 minutes of 5-on-5 hockey playing alongside Malkin since the start of the 2007-08 season and the shots, goals and points (per 60 minutes) they have produced with him versus without him.

Unless you're Pascal Dupuis, just about every player has seen his production spike when on the ice with Malkin, a development that should be a surprise to no one.

Other than Sidney Crosby (and maybe the Penguins should consider using them together a little more often given that sort of production) nobody was as productive alongside Malkin as Neal has been, at least when it came to generating shots and scoring goals. (Kunitz, who regularly played alongside Malkin and Neal during the 2011-12, season had a slight edge in total points.) It was a combination that clearly worked and was as dominant as any center-wing duo in the league.

Even though his numbers have not been anywhere near as good when away from Malkin, Neal's 1.93 points/60 average is still a very good number and would put him with pretty strong company -- Zach Parise, James van Riemsdyk, Jeff Carter, Jeff Skinner, David Perron, Wayne Simmonds, Brandon Saad and Valtteri Filppula all finished last season between 1.90 and 2.00 points/60, and every team in the league would take that sort of production on its top line.

The good news for Pittsburgh is that the key player it received for Neal -- Hornqvist -- has put up similar numbers throughout his career in Nashville while playing on a team with less talent around him and in a system that wasn't anywhere near as wide open. For his career, Hornqvist has averaged 1.90 even-strength points/60 and, perhaps most impressively, has managed to get more than 11 shots on goal per 60 minutes. And if he plays alongside Malkin, he's looking at an almost certain jump in that production.

So although the dropoff when it comes to even-strength play shouldn't be huge, it's still hard to imagine him matching what Neal did, mainly because he does not possess the shot that Neal does. I'm confident in saying that because Hornqvist has converted on just 9 percent of his shots at the NHL level, a fairly low number for a player who spends so much time directly in front of the net. Usually the net-front guys are able to maintain higher percentages than the league average, and while Hornqvist is generally very good in that area, his goal-scoring ability is virtually nonexistent once you get him away from the crease.

Just compare him to Neal when it comes to shots more than 20 feet away from the net.

So where could that prove to be a problem for the Penguins?

Hornqvist vs. Neal on the power play

Over the last three years, only one player in the NHL -- Alex Ovechkin -- has scored more power-play goals than Neal's 38. He typically did it by positioning himself on top of the faceoff circle or finding a soft spot in the slot and beating goalies with one of the most lethal shots in the league. Playing on a team that has playmakers like Crosby and Malkin definitely helps, but that alone doesn't turn a player into one of the most prolific goal-scorers in the league. You also have to have some skill of your own, and few players in the league can rip it like Neal can when he has an opening. That is a big element the Penguins are losing -- and that Nashville is gaining.

This is where the major differences come in. While Neal is more of a sniper who overpowers goalies with his shot, Hornqvist is more of a crease crasher who gets in front of the net and scores a bunch of dirty goals. He's going to get the deflections and the rebounds and score from a couple of feet away.

There is an argument to be made that Pittsburgh might need more players like that, especially when it comes to the playoffs, and Malkin has certainly had a ton of success over the years with similar wingers (his two scoring titles came during seasons when he spent most of his time playing alongside players such as Kunitz and Fedotenko).

But it still seems like it might create a pretty significant hole on what has been one of the best power-play units in the league.

Take a look at the heat maps (via Sporting Charts) for Neal and Hornqvist when it comes to scoring on the power play since the start of the 2009 season. Hornqvist is in one very specific location, whereas Neal is all over the offensive zone. 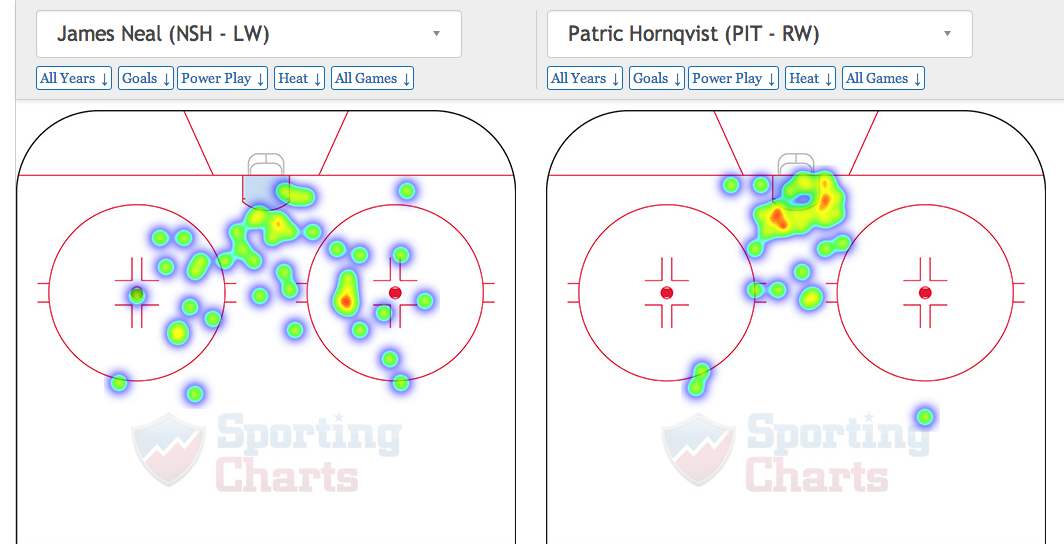 The issue is that Pittsburgh already has a forward -- Kunitz -- who plays that role, and plays it very, very well.

Unless the Penguins intend to move Kunitz or Hornqvist to another spot on the ice -- or put them on separate units -- there really isn't a spot for them to coexist on the ice at the same time on the same power play.

They both do the same thing from the same spot, and given how productive Kunitz has been, does it really make sense to try to move him to a different spot? And as mentioned above, Hornqvist simply does not have the shot to play in Neal's former spot or be a serious threat from anywhere else in the offensive zone.

That, more than anything, seems to be the biggest question Pittsburgh is going to have to answer as a result of this move.