These franchises no longer exist, but we still remember them. This is Lost Franchises, and today we take a look back at the Quebec Nordiques, who built a mini-dynasty and then won the Stanley Cup 2,000 miles away

Thanks to expansion and a series of relocations, the NHL underwent a massive makeover during the 1990s. The league not only grew from 21 teams in 1991 to 30 by the end of the decade, but also saw four teams move around North America.

The second of those relocations -- and the first of two teams to leave Canada for American soil -- was the Quebec Nordiques. The Nordiques left for Denver, Colo. prior to the 1995-96 season, were rebranded as the Avalanche, and won the first of two Stanley Cups the following year on their way to becoming one of the most dominant teams in the NHL during the late 1990s and early 2000s.

And what an interesting path they followed to get there.

Where did the Nordiques come from?

When the WHA and NHL merged before the 1979-80 season, the Nordiques were one of the teams that survived, along with the Edmonton Oilers, Hartford Whalers and Winnipeg Jets. But it was their WHA existence, where they were one of the league's original teams in 1972, that almost never happened. 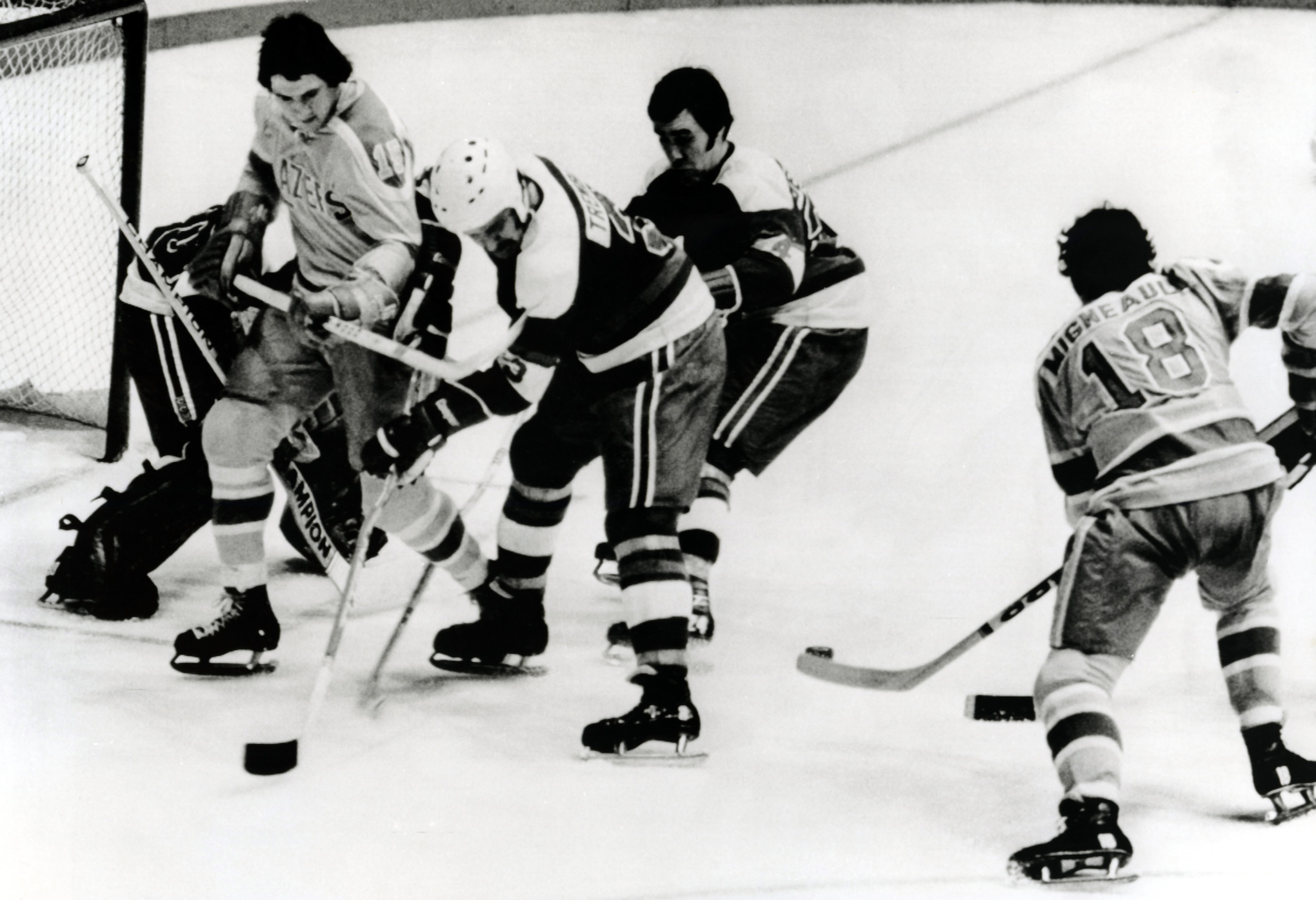 The Nordiques (dark) and Vancouver Blazers (light) battle in a WHA game in 1973. (Bruce Bennett/Getty Image)

The team was initially supposed to be based in San Francisco (it was going to be called the Sharks). But because the initial ownership group lost its funding before the season, the franchise was sold to a group of investors from Quebec, and it was there that the Nordiques were born.

Their first coach was Montreal Canadiens legend Maurice "Rocket" Richard, but he gave up the position after spending exactly two games behind the bench.

Led by coach Marc Boileau they were league champions, winning the Avco World Trophy during the 1976-77 season.

What was the deal with that logo?

You know the one.

According to the Nordiques' old media guides, it was simply an igloo with a hockey stick.

Who were their best players?

Stats are their numbers with the Nordiques in the NHL.

The first two selections were Mats Sundin and Owen Nolan, both of whom spent a few years with the Nordiques before being traded. Sundin was sent to Toronto in 1994 in a multi-player deal centered around Wendel Clark, and Nolan was traded to San Jose following the team's relocation to Colorado for Sandis Ozolinsh in one-for-one swap.

But the third No. 1 overall pick out of that group was the big one. It was a pick that would kick off a series of transactions over several years that would help shift the balance of power in the NHL and help build what would become a mini-dynasty in Colorado nearly a decade later.

The pick was Eric Lindros. 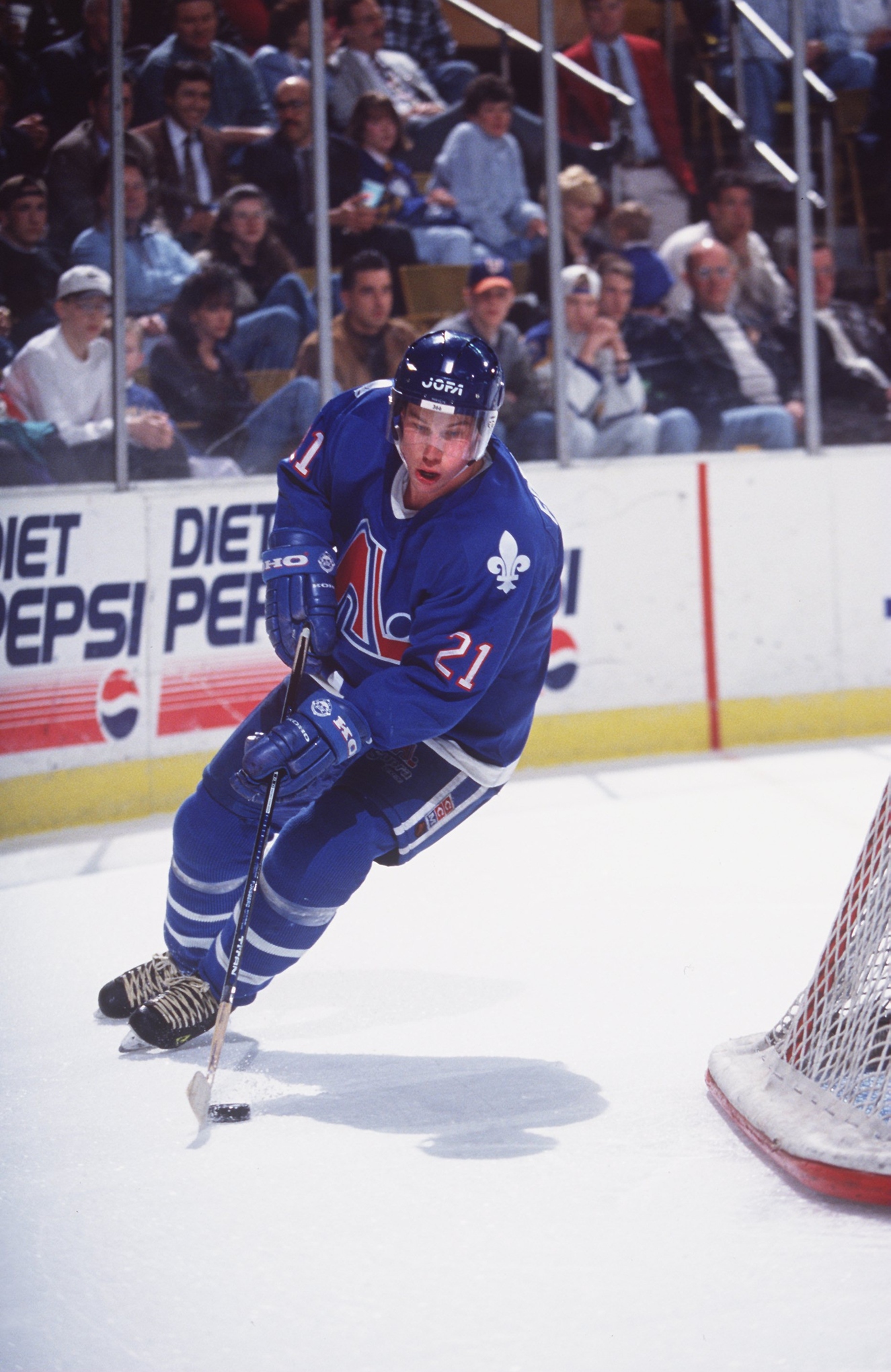 Prior to being drafted, Lindros was an obscenely dominant player in the Ontario Hockey League, touted as a future superstar in the NHL. He struck endorsement deals off the ice before playing a game in the league and was such a freak of nature on the ice, the perfect combination of breathtaking skill and dominating size and strength. Naturally, everybody in the league wanted a shot at selecting him in the draft.

The problem for the Nordiques, who were lucky enough to be the worst team in the league at the absolute right time, is that Lindros wanted nothing to do with them, or the idea of playing in Quebec. Left with no other choice but to trade him, the Nordiques eventually worked out trades with both the New York Rangers and Philadelphia Flyers, resulting in an arbitrator ruling in favor of the Flyers.

It is to this day one of the most famous trades in NHL history.

From there, the Nordiques used the 1993 pick to select goalie Jocelyn Thibault, who would later be one of the pieces sent to Montreal for Hall of Fame goalie Patrick Roy. Hextall, along with a first-round pick, was traded to the New York Islanders a year later for goalie Mark Fitzpatrick and their first-round pick, which was used to select Adam Deadmarsh, a member of Colorado's 1996 Stanley Cup team. Ricci, also a member of the '96 team, was later traded to San Jose for Shean Donovan and a first-round draft pick that would later used to select Alex Tanguay, a member of the 2001 Stanley Cup team.

The worst part about this trade, aside from the fact that fans in Quebec had to watch the powerhouse team that was assembled because of it win Stanley Cups in another city, is that it has at times fooled hockey fans and media into thinking they can trade their best player or a prized prospect at the type of the draft for a massive haul of players that are going to be the foundation of multiple Stanley Cup teams. "Hey, it sure worked when Quebec traded Lindros!"

And that is just wrong. This was a once-in-a-lifetime trade that is never going to be duplicated.

What if they never moved?

Hockey history would look a hell of a lot different than it does today.

Remember all of those great Colorado-Detroit playoff matchups? The line brawls? The hatred? Dino Ciccarelli not believing that he shook Claude Lemieux's hand, and then being pissed right off about it?

None of it would have happened, because the Nordiques and Red Wings were in different conferences and would have never met in the playoffs. They rarely would have met during the regular season. Their games may have had all the importance and meaning of your random February meeting between the Calgary Flames and the New York Islanders. It wasn't until the move to Colorado the two franchises became bitter playoff rivals in the Western Conference and created their special brand of anarchy on ice.

And even though they were still loaded after the Lindros trade and every move that followed it, they might not have either of their Stanley Cups because the trade that sent Roy -- one of the backbones to their 1996 and 2001 championships -- to Colorado almost certainly never would have happened if the team had remained in Quebec. Roy would have still been traded given the events that unfolded in Montreal, but there is no way the Canadiens were going to trade him to one of their fiercest rivals that also happened to play in the same province.

It is in this alternate universe that the Florida Panthers might actually be 1996 Stanley Cup champions.