Jonathan Toews and Patrick Kane are going to be dominating the Western Conference for another eight years with the Blackhawks. It will cost Chicago a mere $168 million.

On Wednesday, he did exactly that.

The team announced that Toews and Kane have signed eight-year contract extensions that will run through the 2022-23 season. The team did not release the financial terms of the contract, but the deals are both reportedly worth $84 million. That comes out to matching salary cap hits of $10.5 million per season, a substantial increase over the matching $6.3 million cap hits their current deals carry.

Those cap hits will not only be the largest ones currently in the NHL (passing Alex Ovechkin), they are the only two to exceed the $10 million level, and that's sure to get a lot of attention. In a salary cap league, there is nothing hockey folks love doing more than analyzing a team's payroll structure and trying to figure out how teams can build around such expensive players.

But there are a couple of things to keep in mind here when it comes to these contracts and the eye-popping dollar figures.

For one, with the new eight-year term limit on contracts teams are no longer able to tack meaningless years on to the end of a contract to lower the cap hit. Under the old CBA, a team could sign a player like Zach Parise to a 13-year contract, pay him more than $10 million in actual salary for the first few years, and then tack on a couple of $1 million seasons at the end to significantly lower the cap hit.

Those days are over, and what we're seeing now is a more accurate representation of what the best players in the league earn in actual salary every year.

The other factor is that the salary cap is going up this year, and it's going to keep going up -- perhaps significantly. Hypothetically speaking, if the NHL salary cap in 2015-16, the first year of these new deals for Toews and Kane, comes in at $74 million, and the Blackhawks make no other significant changes to their roster, they would have 57 percent of their allotted cap space going to Toews, Kane, Marian Hossa, Patrick Sharp, Duncan Keith and Brent Seabrook, their six largest cap hits. This past season, when the Blackhawks reached the Western Conference Final for a third straight year, those same six players took up 54 percent of their allotted cap space. 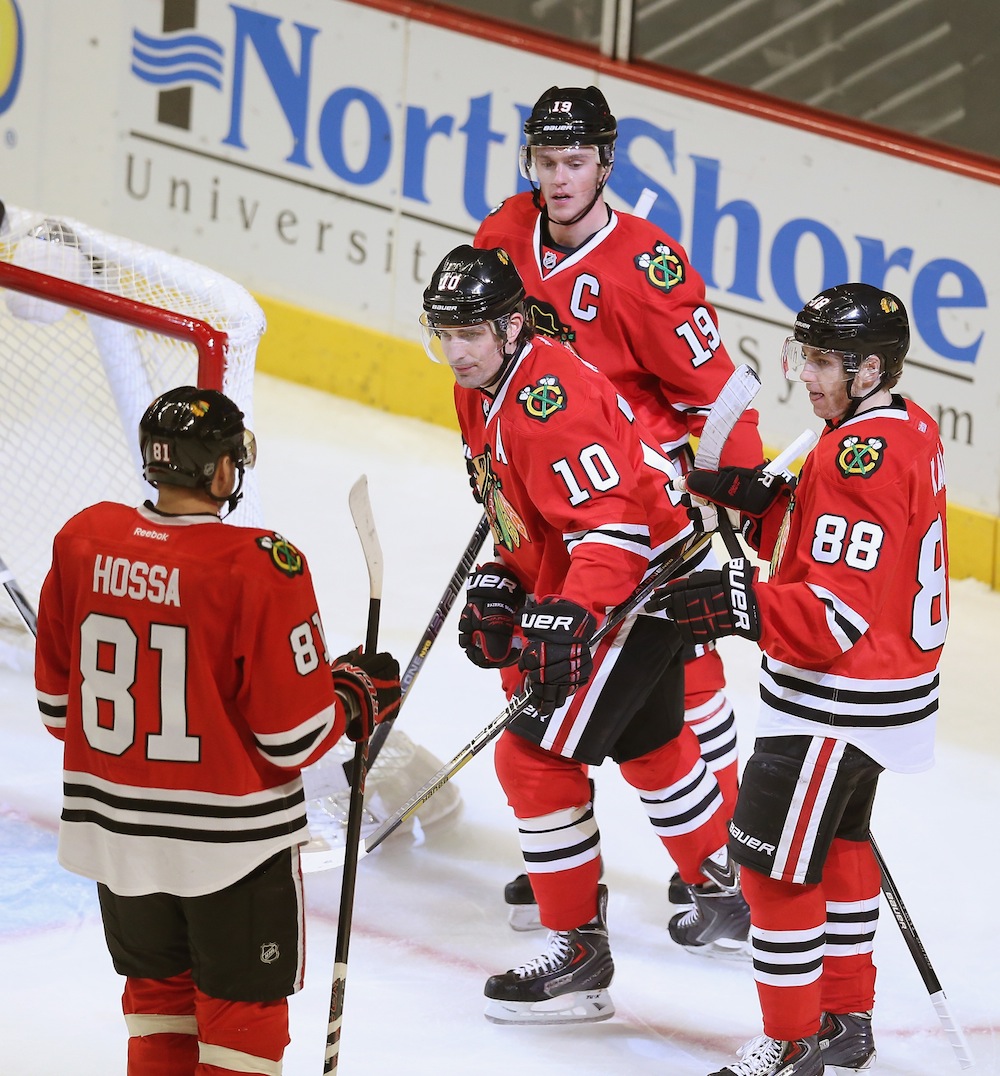 But all of that is assuming no other changes are made, and in the NHL, there are always changes to your secondary players, a fact the Blackhawks know that more than anybody. They've had their salary cap crunches in the past and have had to make drastic changes to their depth, going through a mass exodus following their 2010 Stanley Cup win that saw them lose Andrew Ladd, Kris Versteeg and Dustin Byfuglien.

It's possible something similar will happen over the next couple of years, perhaps even with a Sharp or Bryan Bickell getting moved out at some point. In which case, they will need a steady stream of younger, more cost-efficient players to move into the lineup.

The Blackhawks already have a pretty strong collection of younger depth players who are still in the early stages of their careers and not yet making big dollars, including Brandon Saad, Andrew Shaw, Jeremy Morin and the highly anticipated arrival of Teuvo Teravainen.

As long as they're able to keep that sort of talent coming through the pipeline, and as long as they have Toews and Kane healthy in the prime of their careers -- remember, Toews is still only 26, Kane 25 -- they're going to remain a force in the NHL.

Since the duo arrived in Chicago during the 2007-08 season, they have not only been two of the most productive individuals in the league, the Blackhawks have also been one of the elite teams in the NHL. They've made the playoffs in six of their seven seasons, made the Western Conference Final four times, won two Stanley Cups and have won 57 playoff games, tied for the most in the league over that stretch with Boston and Pittsburgh.

So, yeah. Don't worry about the Blackhawks and their salary cap situation after these contracts. They're going to be just fine.