Let's look back at Matt Duchene's embarrassment of Karl Alzner, the Capitals

Matt Duchene's early-season beauty against the Capitals comes in at No. 10 on our list of the best 10 goals of the 2013-14 NHL season.

Let's break it down frame-by-frame and get thoughts from those who loved and hated it most.

Share All sharing options for: Let's look back at Matt Duchene's embarrassment of Karl Alzner, the Capitals

The Colorado Avalanche far exceeded expectations in the 2013-14 season. Just months removed from finishing dead last in the former Northwest Division, and having picked first in the 2013 NHL Draft, the bar wasn't set very high for the team Patrick Roy inherited.

Everything doesn't always go according to the script, though.

Colorado exploded out of the gate, winning its first six games and 12 of its first 13. In its fifth win of the season, the Avalanche hung five on the Capitals at the Verizon Center in D.C. It also brought about an early-season highlight from Matt Duchene.

A play-of-the-year can come at any moment. Even in the early stages of the season, even from a team no one expected to produce many highlights. And in that vein, Duchene's jaw-dropping goal came from seemingly nothing. If you blinked, it was easy to miss.

Steve House, Mile High Hockey: That was a goal I had to watch multiple times to figure out what had even happened. That change in speed was mesmerizing. Eh Alzner?

The Peerless, Japers' Rink: There is a larger context. The Caps lost three of their first four games of the season before facing Colorado, and their only win was earned when they had to climb out of an 0-3 hole to win in a shootout against a poor Calgary team.

Cheryl Bradley, Mile High Hockey: This was the moment I realized Duchene will rightfully be included in those conversations about elite players in the NHL. He's always shown incredible talent, proving from the start that he was going to be a tremendous force in the league. But it wasn't until this goal that I really understood how much of a force.

Matt Furedy, Mile High Hockey: This goal exemplifies the power, skill, and timing that Matt Duchene brings to the table.

Jon Press, Japers' Rink: The Duchene goal was part of a 5-1 Avs rout that pushed the Caps to 1-4-0 on the still-young season, and was particularly depressing because Karl Alzner - a lottery pick with more than 250 NHL games under his belt - barely got a stick on Duchene, despite being in seemingly good position.

Again, it was a rather pedestrian start to this sequence. The Capitals were moments away from killing off the remaining seconds of a penalty. Andre Benoit had circled back into his own zone to retrieve the puck, while Duchene had also retreated, but was building speed and momentum exiting the blue line. 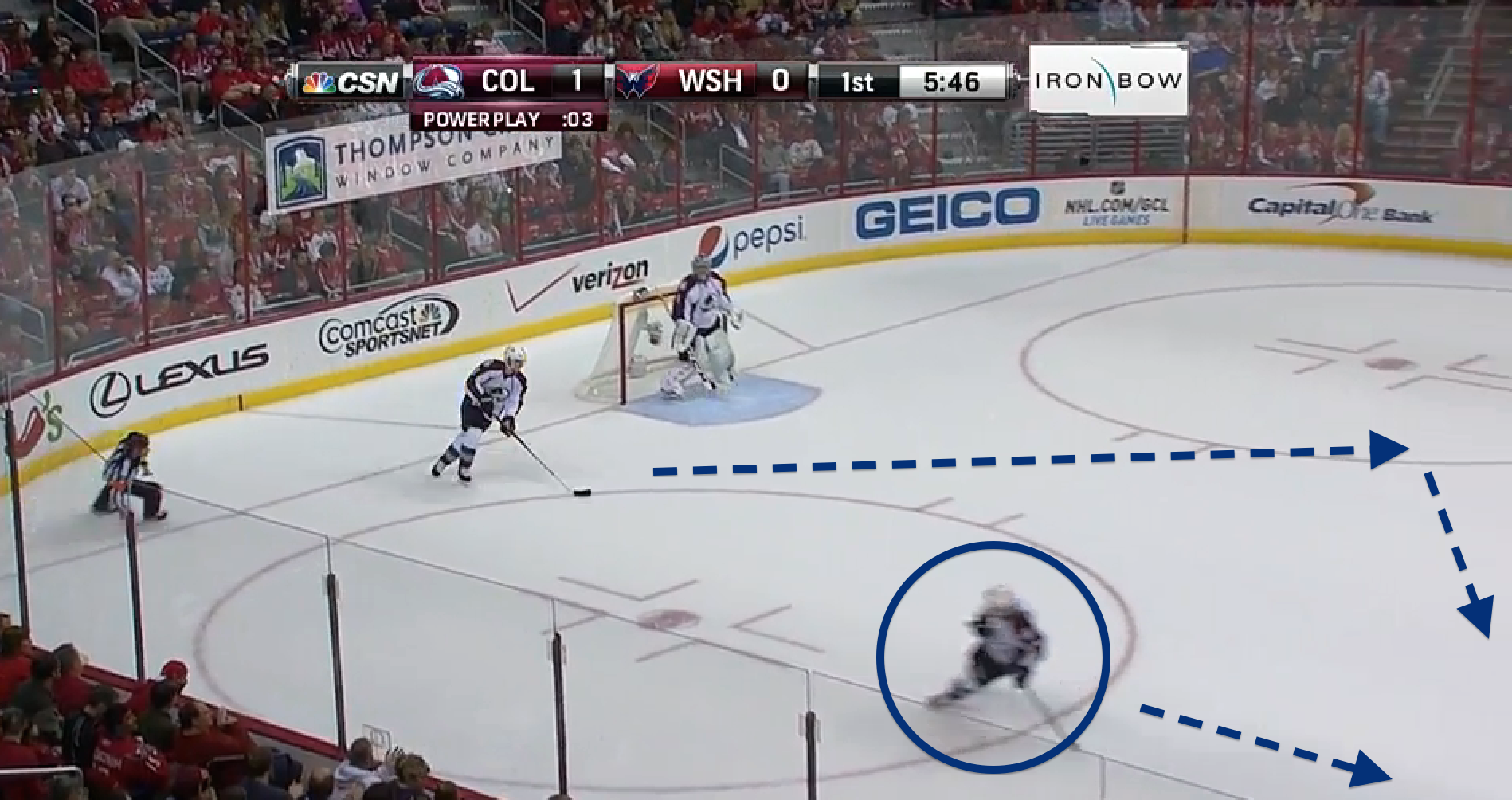 After Benoit hit Ryan O'Reilly in the neutral zone, the Capitals had one man behind the puck, with a second penalty killer closer to their bench who will soon be behind Duchene. With a player in the penalty box, Washington only had two skaters left to stop the streaking Colorado forward, who took a wide pass from O'Reilly. 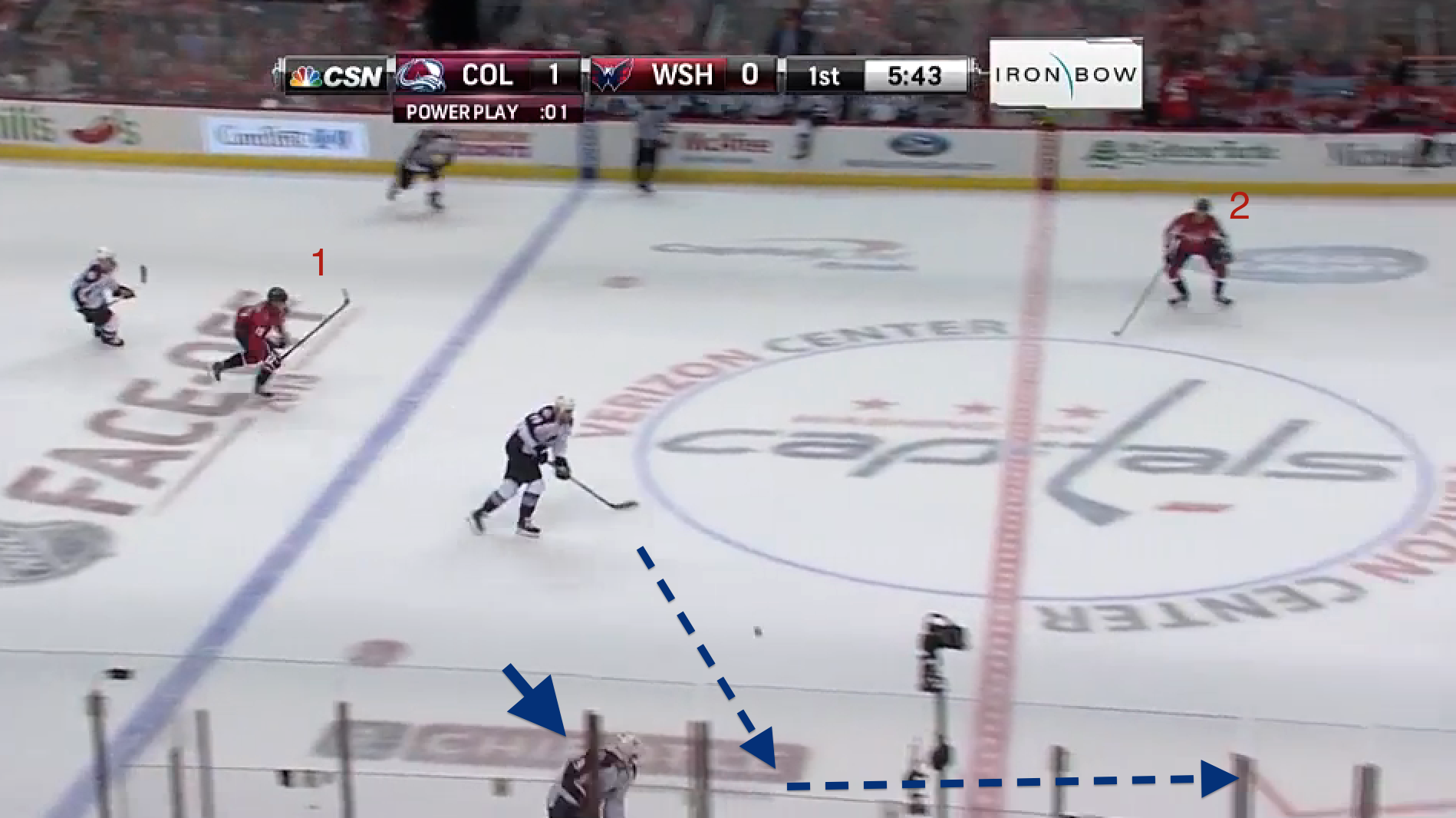 Washington was actually in very good shape to defend against this rush. Alzner may have been a bit flat-footed, but his gap with defensive partner Steve Oleksy was well-spaced. He could have forced Duchene to the outside, neutralizing any quality scoring chance. 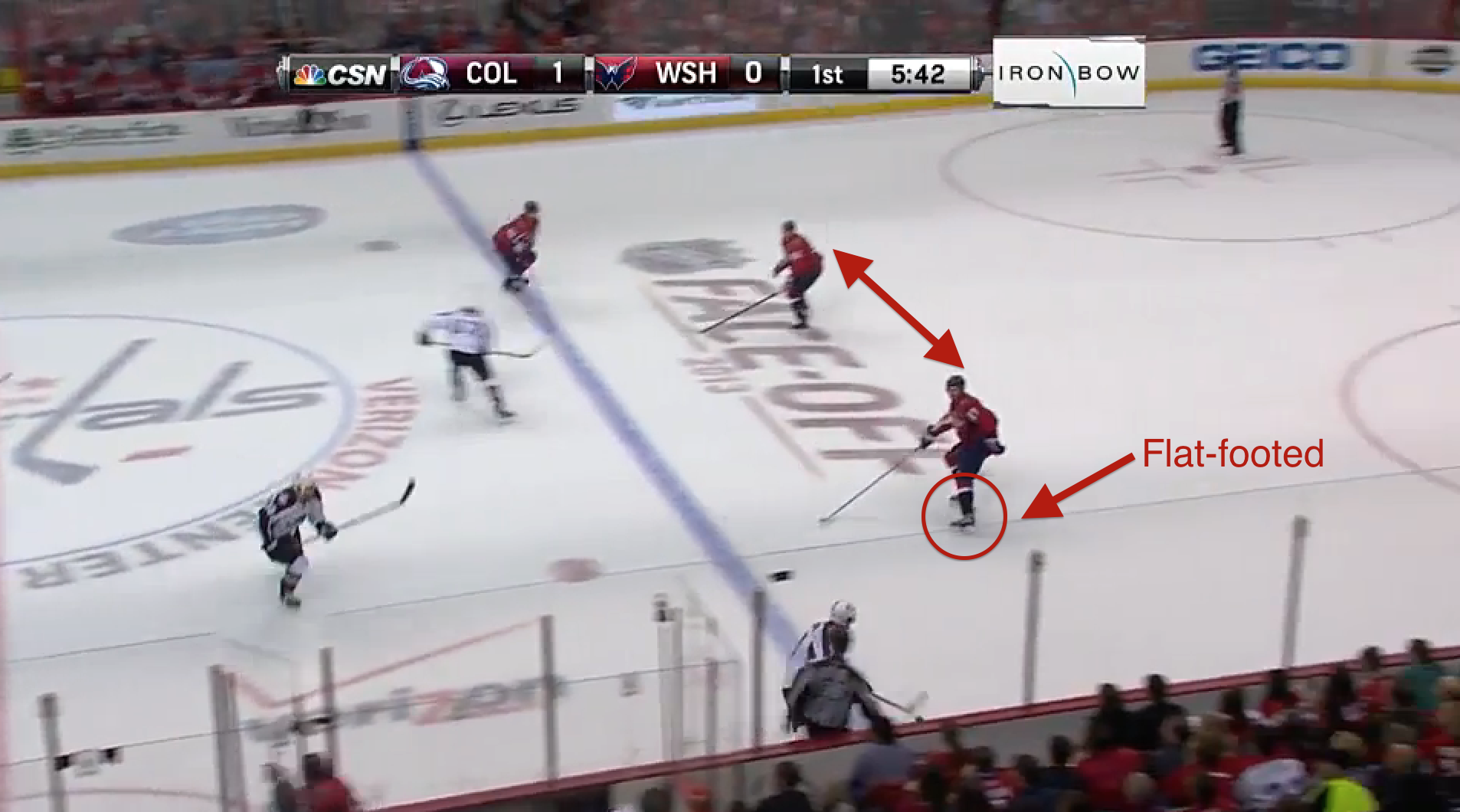 Duchene recognized the situation, though, and as he made his way down the wall, he lulled Alzner into a false sense of security. By turning his hips inside, he slightly changed Alzner's angle, setting him up for his next move. 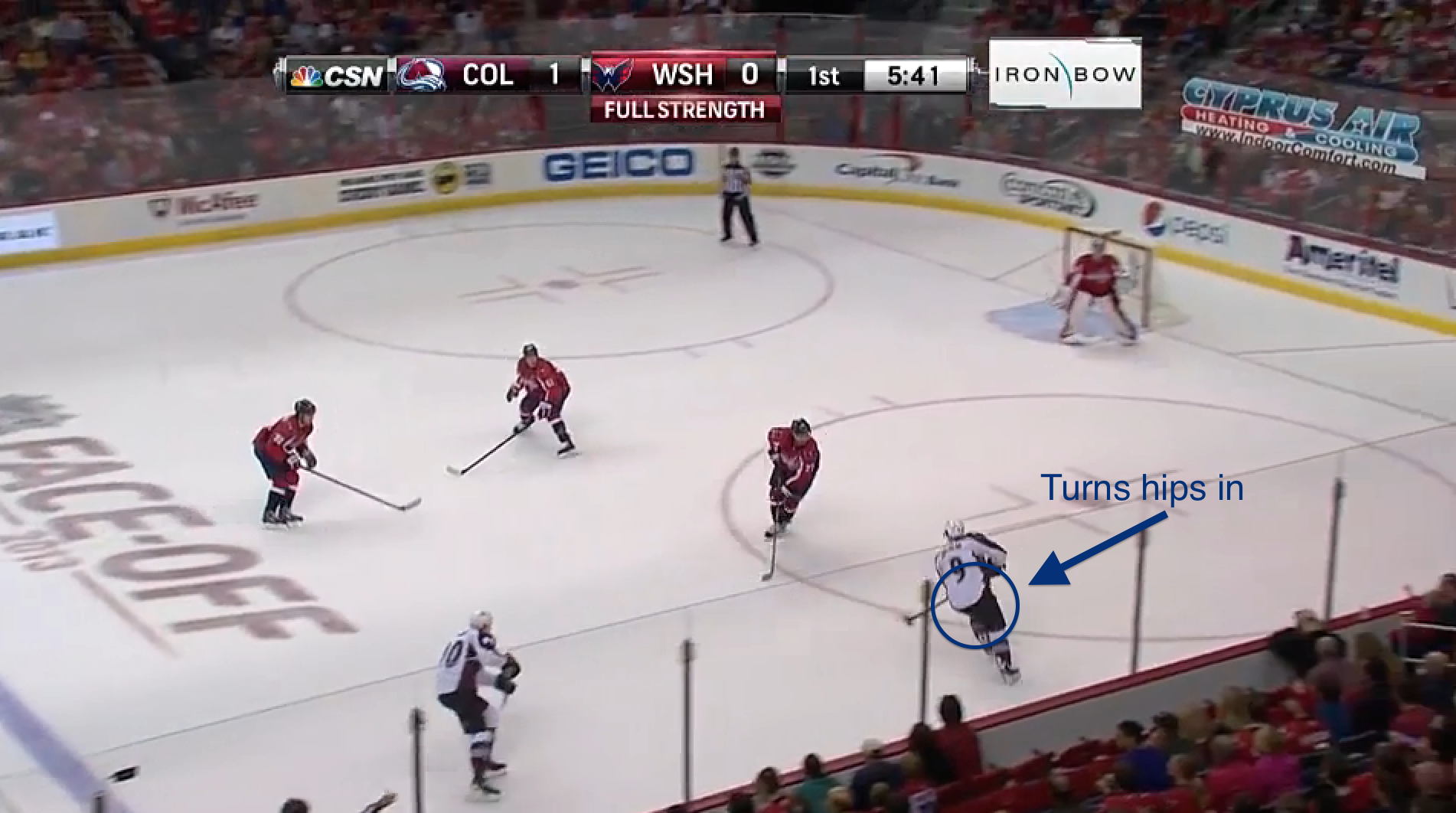 Just a slight bend of the knee, a glance toward the space between the circles, and Duchene baited Alzner for a fun ride. 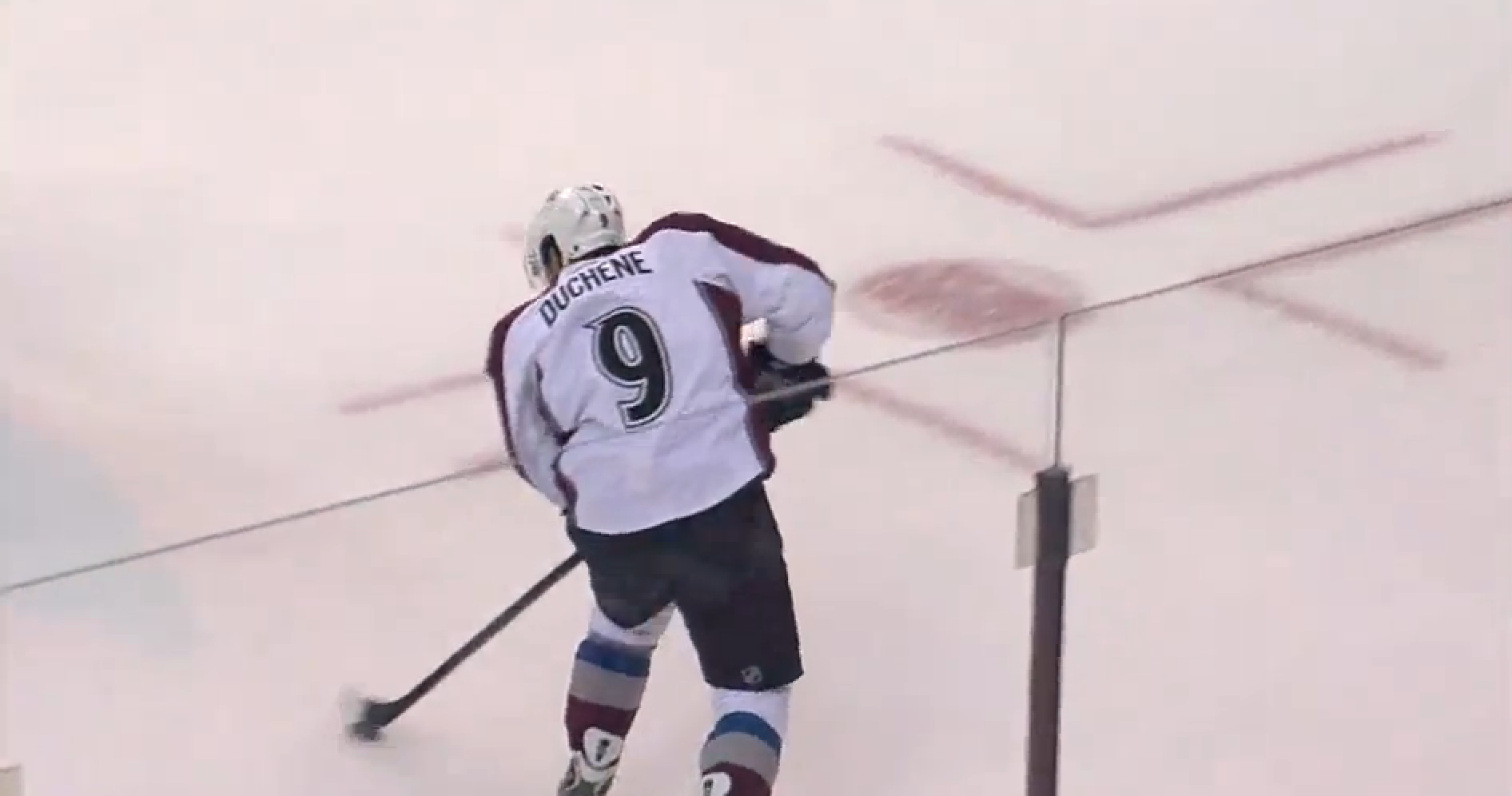 Things were about to go from bad to worse from Alzner. Duchene bounced back outside, and instead of moving his feet, Alzner reached with the stick, which never really works for a defenseman in recovery mode.

Mike Thompson, Mile High Hockey: Alzner went to sleep on the best player in the Avalanche lineup.  Duchene made him pay. 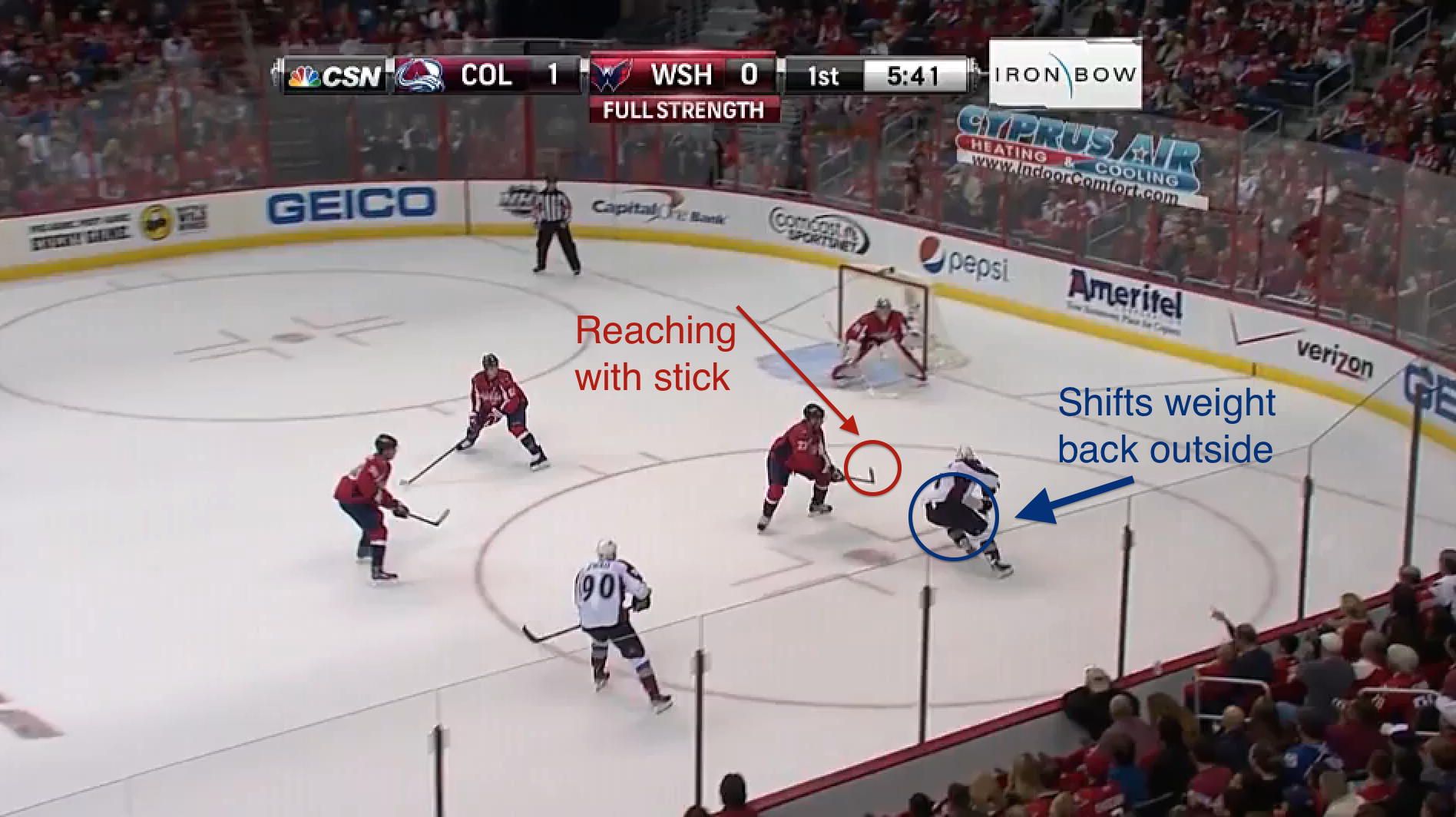 No chance for Alzner here. Zero. As he reached to try to make a poke play from a poor defensive position, Duchene slid the puck back under his stick, now in a prime position to shoot the puck.

Cheryl Bradley, Mile High Hockey: This is a power forward move all the way, a new look for Dutchy. He abandoned his signature deke and spin moves and coupled strength on his skates with that deceptive speed and searingly accurate shot. And he made it all look oh so easy. 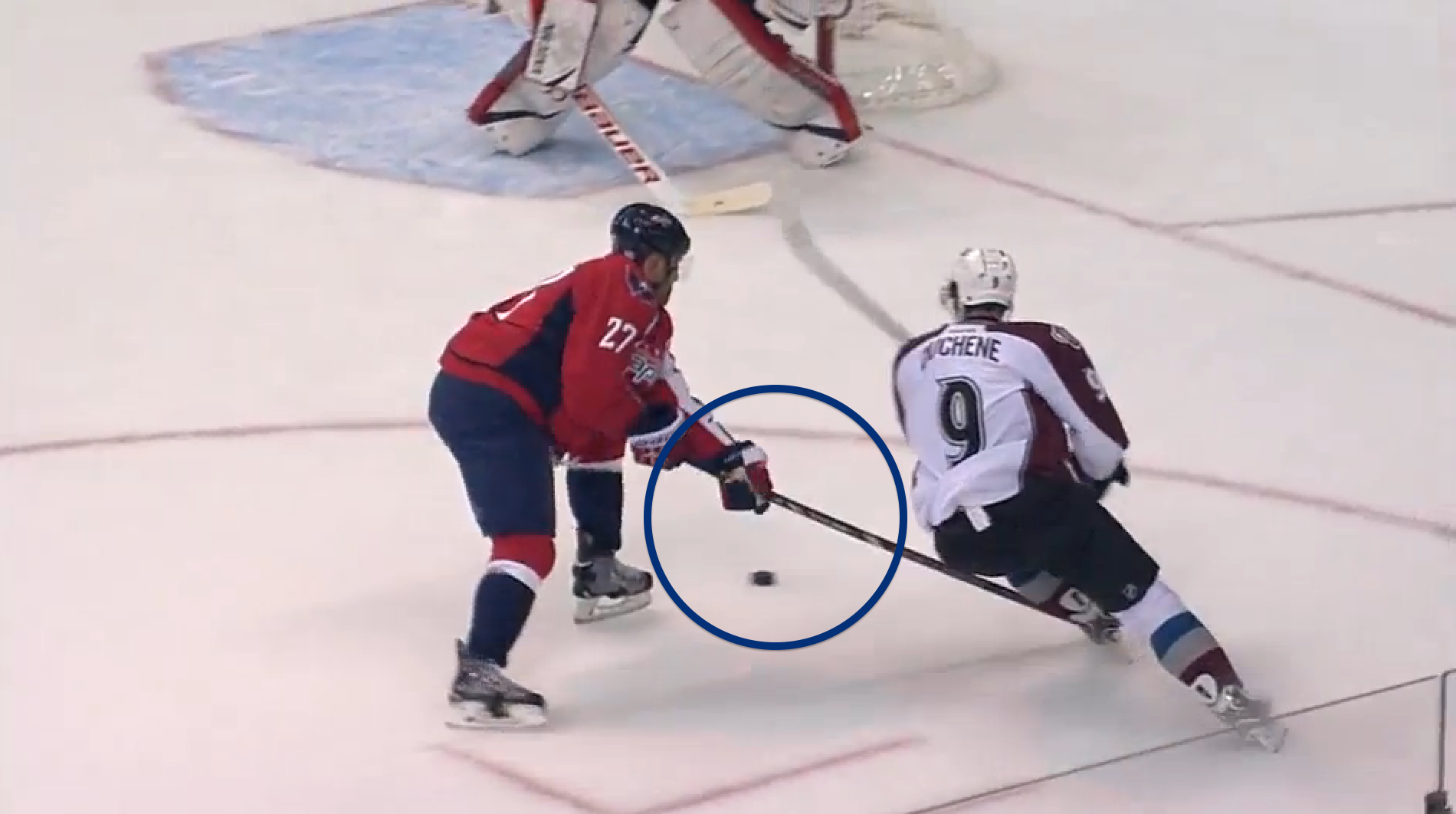 As Michal Neuvirth shifted toward the post to defend a stuff-in try, he left the top corner open, and for a player of Duchene's caliber that's a pretty big target.

Mike Thompson, Mile High Hockey: Then again, Neuvirth is now a Sabre. My point is that Matt Duchene is good and he makes everybody look bad. 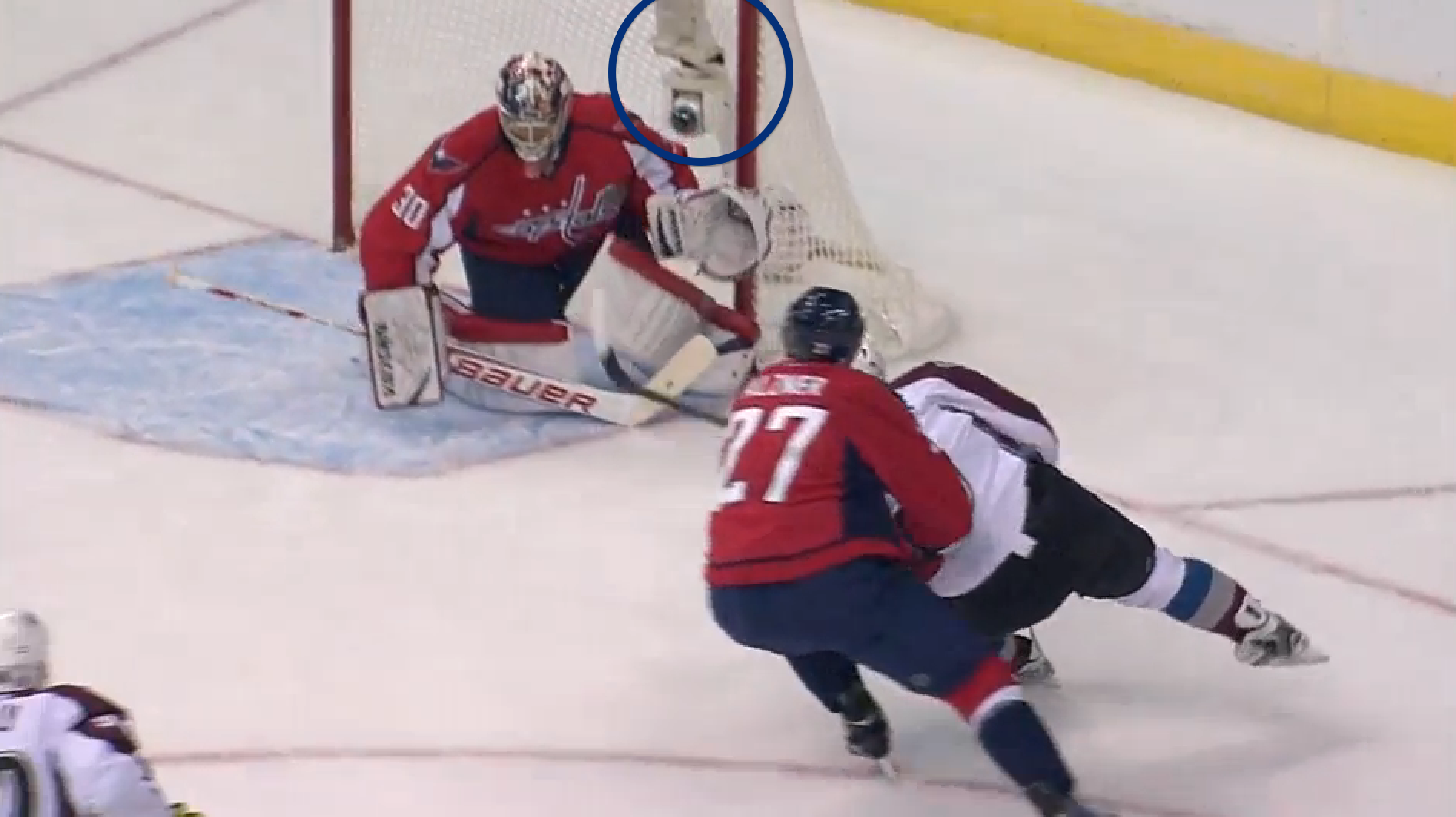 Cheryl Bradley, Mile High Hockey: The remainder of the season would see even more examples of how Duchene elevated his game, and he just kept getting better. I found myself wondering at times if we've yet seen his ceiling.

The Peerless, Japers' Rink: The whole team was playing in a funk that seemed to be reflected in the way Karl Alzner played Duchene.  But here is the odd and aggravating part about that play.  Matt Duchene is a speedy guy, but he was on the ice for a 1:03 shift that ended in that goal (it was the fourth of his first five shifts of the game that were at least a minute long).  Maybe it was playing at sea level that rejuvenated him.

Matt Furedy, Mile High Hockey: That little apparent hesitation? Gorgeous. And the speed of his stick, sneaking the puck around Alzner and still getting a great shot off? Fantastic. Please do this forever.

Be sure to come back and check out which goals round out the rest of our Top 10 from the 2013-14 season.