John Scott gave the NHL back to hockey fans

John Scott took over All-Star Weekend, and with it gave hockey fans a version of the NHL we love to root for.

Share All sharing options for: John Scott gave the NHL back to hockey fans

NASHVILLE, Tenn. -- We will never have an All-Star Weekend quite like the 2016 NHL All-Star Weekend. Never, in any sport. I feel pretty comfortable going on the record with that.

It doesn't need to be illustrated for you, because if you clicked on this story you certainly know the theme: journeyman NHL player John Scott, a man who earned that modest job title only because he is good with using his fists as weapons, voted into the All-Star Game as a joke at the league's expense. Then the tone-deaf league tries to force him out of it, worried it would ruin the sanctity of its precious game. That caused the fan backlash, and the rally of support for Scott, his two little daughters and his pregnant wife.

And ultimately, that's what pushed the raucous cheers for Scott all weekend in this hockey town they lovingly call Smashville. It's what caused the near-riot when, after his two-goal performance in the game, the NHL picked Roberto Luongo, Taylor Hall and Johnny Gaudreau as the three finalists for the game's MVP. (Scott has had just one multi-goal season in the NHL, so scoring two in what turned out to be a relatively low-scoring All-Star Game is no small feat here.)

Somehow, during this weekend in which Scott got louder cheers in Nashville than players who play for Nashville, the NHL still missed the point in the end.

So we did what we did the first time, again: voted him in anyway. Stole the choice away from the league with nothing but the volume knob at our disposal.

Taylor Hall, Roberto Luongo and Johnny Gaudreau are the MVP finalists and the crowd is booing.

Just give it to him. #VoteMVPScott

Hockey fans revolted against the league like this not because of Scott specifically, although the way he handled the experience from the beginning has made him hundreds of thousands, if not millions, of new fans. If you were to poll most of those same people on their opinion of Scott before this weekend, they probably would have had a completely different one. His role in the game is one that primarily exists to intimidate and injure other players, something that the sport is trying to and successfully removing. He's always been a pretty hate-able player on the ice.

There's a deeper, low-humming din in the background of all of this, beginning with the fact that the original fan vote ever happened in the first place, and carrying on through the movie-like events on the ice Sunday night in Nashville.

It's that we all want better from the NHL. We want more than just an entertaining sport; we want a league that we can all be proud to root for, and a league that truly is fun to root for. The sport already is that. The league that controls the sport is not.

We want broadcast teams that are better than this:

We want a league with a leader who doesn't talk down to us; who doesn't blatantly lie to us and insult our intelligence on subjects ranging from concussions to the salary cap; who doesn't lead us into another damn lockout.

We want a league that celebrates players like P.K. Subban and Alex Ovechkin, instead of shunning them as outsiders who don't conform to the 1970s ideals of hockey that so many in the league office and the media still hold close.

We want more of Brent Burns dressed like Chewbacca. 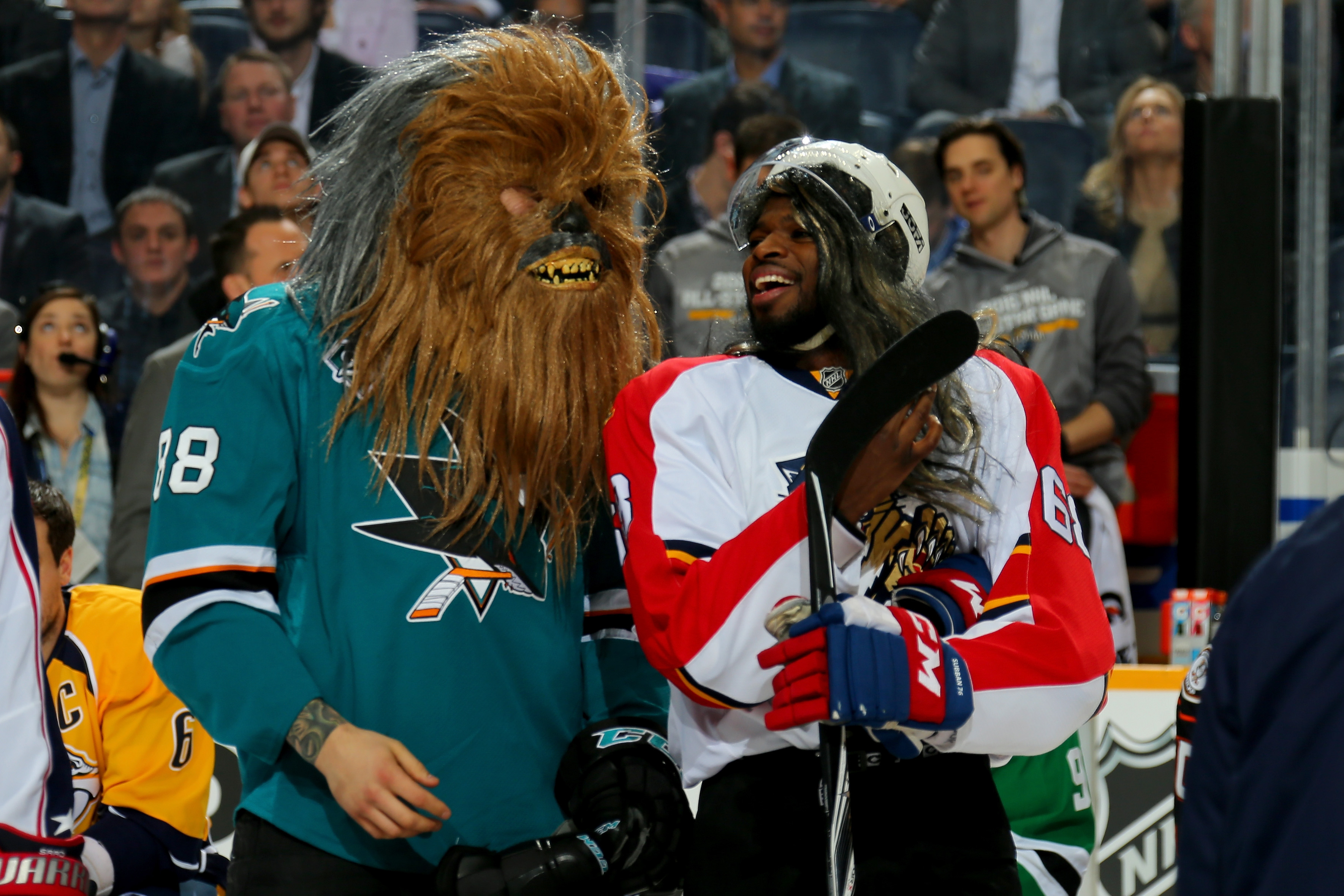 We want a league that takes Subban's advice when he, smartly, says they need to embrace the fun side of its players more:

"Bobby Orr didn’t celebrate because that’s the way he was—he just didn’t feel the need to. Great. Tiger Williams used to go down the ice sitting on his stick. That doesn’t mean he’s a bad guy—that means he gets excited. There’s nothing wrong with that."

"The perception is that in order to be a good team player, you need to be like everybody else. And I don’t understand that."

The NHL does not do these things. Maybe in bits and pieces it does, but not truly.

And so we push back in any way we can. That's why booing Gary Bettman at marquee league events is a responsibility taken personally by hockey fans in all cities. That's why we vote John Scott into the All-Star Game -- because we want the fun and uniqueness that the NHL establishment so often tries to suppress, and we want to watch them squirm a bit while we take that back from them.

That worked flawlessly this weekend, and John Scott was the perfect focal point for it. His on-ice persona has always been so counter to the fun side of hockey, and the All-Star Weekend was a chance to look beyond that -- to see how fantastic a person and a family man he is.

For hockey to grow and become more popular, it has to be more than just a fantastic game. It has to be a fantastic game performed by people we know and love. And for that to happen, we need to embrace players that have personality; players who are different and cocky and funny and arrogant. 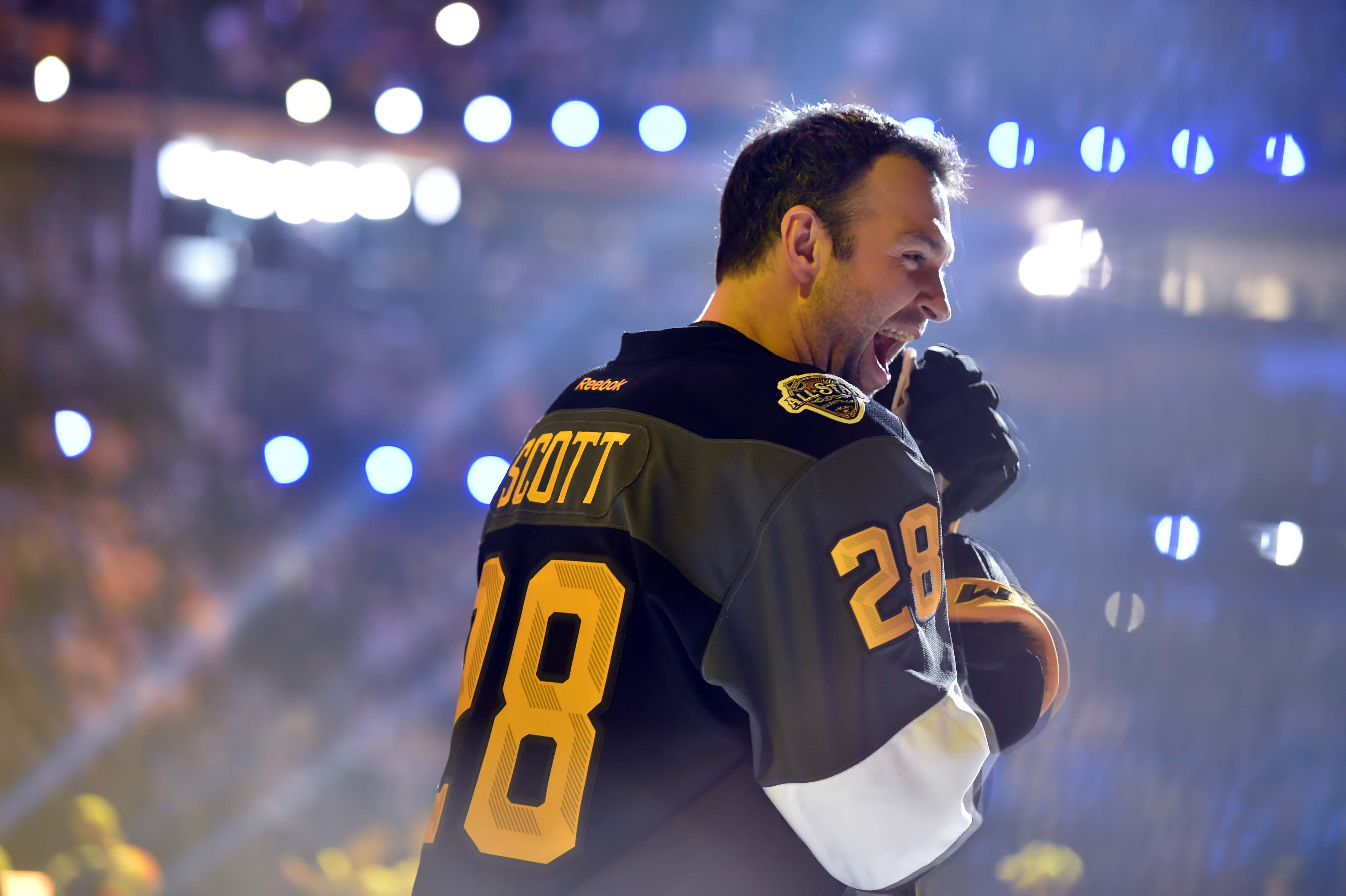 We got to know and love John Scott -- "big, goofy Dad" John Scott -- this weekend, and the story captured the attention of the entire sports world as a result. It's hard to say what the long-term implications of that will be. Will the NHL resolve to never let this happen again, canceling next year's fan vote and taking a step backwards in the process? Could definitely imagine that happening.

But the hope is that the league goes the other way with it. Embrace it. Turn All-Star Weekend not into a showcase of the league's top on-ice talent, but into the league's personalities. Stop worrying about whether the hockey will be good, or if the players "deserve" to be there. Focus more on whether or not it'll make people smile.

John Scott gave us all joy this weekend. Like, literal child-like joy. We might never get quite that feeling at an All-Star Game again, but even if the NHL gets halfway there next year, it'll be a rousing success.