Florida State bettors have been cashing tickets all season, and they lay 8.5 points against Auburn on the BCS Championship Game odds menu. This post provided to SB Nation by OddsShark.com.

Combine that domination with the Odds Shark computer's prediction of a blowout of the Auburn Tigers, and it's small wonder many college football bettors are backing the top-ranked Seminoles on the BCS Championship game odds menu. 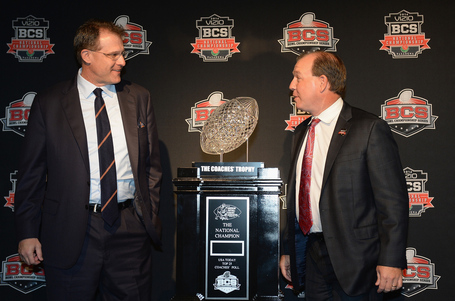 Both teams enter the BCS National Championship Game on five-game bowl win streaks. And the SEC enters this game on a seven-year title streak, which has seen SEC schools not only win every national title, but cover the spread each time as well, according to the BCS title game odds history. One of those winning streaks must come to an end on Monday, January 6 when the top two teams in college football fight for the championship at the Rose Bowl in Pasadena.

Florida State opened as a 6.5-point favorite but had been bet to almost nine points as of Jan. 2. The number's currently settling around 8.5.

"Our computer says 49-35 for FSU, but bettors have been burned twice recently by betting against Auburn as a big underdog," said Jack Randall of OddsShark.com. "The last two times Auburn was an underdog of nine or more, they didn't just cover the spread, they won the games outright."

The Florida State Seminoles (ACC, 13-0 SU, 11-2 ATS, 10-3 OU) were without question the best team in college football over the course of the regular season. With the second-best scoring offense in the nation averaging 53 points per game and the best scoring defense in the nation allowing just 10.7 points per game, the Seminoles ran roughshod over every opponent they faced.

They covered just about every spread the sportsbooks could throw at them. Florida State finished the season on a perfect 6-0 against-the-spread run, including a cover as a 58-point favorite in an 80-14 win over Idaho.

Averaging an astounding 335.7 rushing yards per game, the Auburn rushing attack was the best in the country despite residing in college football's toughest conference, the SEC. From a bizarre Hail Mary catch against Georgia to the field goal kick return that shocked the nation against Alabama, Auburn has the look and feel of a team of destiny.

The Tigers may enter the game as a nine-point underdog, but no one in college football is taking them lightly. Except for the computer.