The story of Fox's flashy, but impressive, attempt to get into the cable sports business.

There's an old Ric Flair quote that's become somewhat of a sports cliche over the years that goes "to be the man, you gotta beat the man." It's been 17 years since Time Warner launched CNNSI, a joint venture of the first three letters of that acronym and the last two, that was considered the first serious attempt at challenging ESPN. It lasted about five and a half years. Fox Sports Net gave up on trying to combine regional networks into a national focus around the same time.

Then there was quiet for the longest time, until 2005, when Comcast rebranded the Outdoor Life Network as a sports channel, and finished that rebranding in 2006, when it became VERSUS.

There are definite reasons to be skeptical about Fox Sports 1, but you can't deny Fox puts on one hell of a presentation

They lasted about five years before the Comcast/NBC merger made it NBC Sports Network. CBS converted a startup known as College Sports Television into what eventually became the CBS Sports Network. Even the most ardent supporter of either network probably wouldn't claim it has made even a dent in ESPN's share of the market. They have, at least in NBCSN's case, succeeded on their own terms. Which is good, for now.

I mention those two because they make up what the non-ESPN national cable sports network landscape will look like on Aug. 16 of this year. On Aug. 17, a third challenger enters the ring: One that will have better distribution than either of the aforementioned networks started with. One that probably has more live programming -- if not immediate, then coming on the way -- than either of the others started with. Most importantly, one with a company behind that has managed to force itself into a conversation where people suggested it didn't belong for years and years now.

There are definite reasons to be skeptical about Fox Sports 1, which I'll get to in a bit. But you can't deny Fox puts on one hell of a presentation, and one with some numbers and substance behind it. Fox, of all the major broadcast networks that produce sports telecasts (and, don't forget, ABC is owned by ESPN anyway, so they don't count), probably has the brand that best suits a 24-hour sports cable channel. It does everything big, flashy and in your face.

Fox touted during its presentations to both the press and advertisers on Tuesday that it has more than 20 regional sports networks, and the Big Ten Network and a big online presence. That is in addition to the stuff that's on the network itself. Oh, and one of those regional networks is the YES Network, and Fox's new MLB deal allows for 26 extra games per year from teams on networks owned by News Corp. The tools are all in place to see a future where Fox could be a legitimate challenger. Maybe. And by the future, I mean waaaaaaaay in the future, because viewing habits take years, not weeks or month, to change.

But let's step back and look at what Fox has for now, and what Fox Sports 1 will have when it launches Aug. 17. I'm going to break it down into four sections: live programming right now (as in, when the network launches), studio programming right now, programming in the future, and some good old-fashioned speculation that some of my cronies in the sports media world have done lately.

Fox Sports 1 will debut live Aug. 17 with a UFC card. UFC will hold a constant, consistent presence on FS1, something Jay Glazer was really excited about when I spoke to him at the upfront. "A lot of people come up to me and ask, 'Where can we watch it?' because they didn't know where Fuel [an extreme sports channel that will likely be rebranded as Fox Sports 2 in the future] was," Glazer said. "Now they'll get to see one of the best sports in the world."

College football will make an immediate impact on FS1. If you're familiar with the package of Big 12, Pac-12 and Conference USA games that aired on FX last season, those will all be moving to Fox Sports 1. Notre Dame's Nov. 30 clash with Stanford was one of the big games mentioned that will air on the network. They will have Saturday double- and triple-headers to complement Fox's Saturday night game.

One of the worst-kept secrets of the Fox Sports 1 launch is that the network is aggressively pursuing and optimistic about a deal with what is essentially the new Big East, aka the Catholic 7 (aka Miguel Sanchez, aka Dr. Nuyen Van Thock). They also have deals with Conference USA, the Big 12 and the Pac-12. It was suggested that college basketball would have a daily presence in terms of live games from the fall through March.

The UEFA Champions League will move over from Fox Soccer to Fox Sports 1 and have a midweek presence on the network (Fox specifically bragged about having live games while the other networks have talking heads on). I'll have more on NASCAR in a bit, but the Craftsman Truck series, which had existed on the network Fox Sports 1 is replacing -- the Speed Channel -- will air its races on Fox Sports 1.

Fox will launch with three hours of live studio programming per day.

ESPN has a 'SportsCenter' problem, not a hockey problem 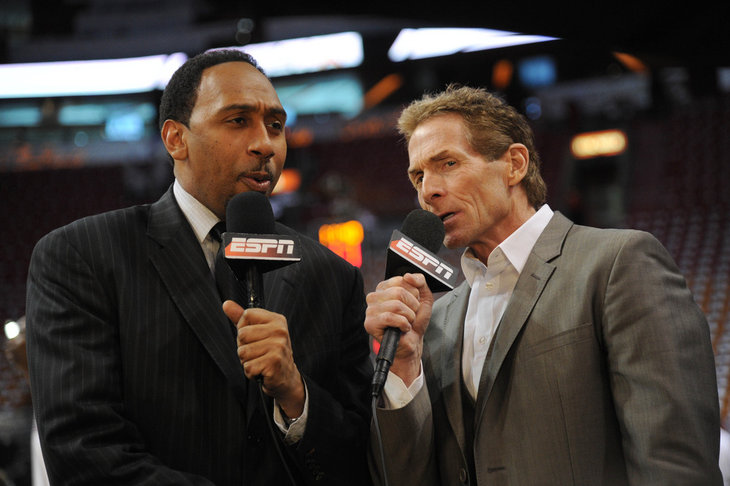 The most important, I'd argue, is Fox Sports Live, which all of you are going to label The Big Fancy Fox SportsCenter Competitor. I can't stop you, so might as well put it out there. There have been no anchors named for the show, but we know that it will air every night at 11 p.m. ET. Fox has suggested they'll use their vast swath of "insiders" (Ken Rosenthal, Jay Glazer, etc.) and utilize as many of their regional sports networks for content as well.

Whereas that show will likely have to struggle to carve out a niche, a nightly football show for Fox is a complete no-brainer. On Fox Football Daily, The cast of Fox NFL Sunday will rotate in and out five nights a week at 6 p.m. ET to ... well, you guys have seen a football talk show before, and you've all seen Fox's pre-game show. It'll be that, but every day. Jay Glazer -- who is also expected to be a daily presence on it -- was most enthusiastic about the show, suggesting that he usually has to wait for the Fox Sunday show to get out stories he's had in him for four or five days. A show with a strong foundation of Glazer -- one of the most connected men in all of NFL TV -- seems like an obvious win for the network.

Let me preface what I have to say about Regis Philbin's nightly 5 p.m. ET "The View for sports" show Rush Hour by saying that I love Regis Philbin, and I suspect most of America bears him no ill will. He was very cordial and very much in character when I spoke to him about the show, which he claims Fox came to him with the idea for. It won't be a "Regis and Kathy Lee" with sports in that Regis will have a rotating panel of experts and not a consistent co-host. Of all the things Fox pitched us on Tuesday, this is the one I wasn't really buying at all. But Regis is a beloved broadcaster, and maybe everyone who loves Notre Dame exactly as much as he does will tune in.

Fox Sports 1's full complement of sports programs really doesn't kick in until 2014. It has circled the week of the Super Bowl in New Jersey next February as a benchmark. There will be college basketball events at Madison Square Garden and Barclays Center, a U.S. Women's Soccer friendly from Red Bull Arena, and a UFC card at Prudential Center, in addition to what was described as sort of party version of Fox NFL Sunday live from Times Square at midweek. Also, around that time, FS1 will launch its signature morning show.

Also in 2014, Fox's new MLB package will kick in. Fox Sports 1 will air Game of the Week -- a broadcast television staple for decades -- every Saturday of the MLB season.

FS1 will never look better than it does today, when everyone's all smiles and big promises.

Fox will keep 12 weeks of prime-time baseball during the summer, which will air in doubleheaders with FS1's coverage. Fox Sports 1 will air a live, nightly "look-in" show for baseball. Here's the big kahuna: Fox Sports 1 will get two League Division Series and one League Championship Series each postseason. The LDS part of that contract was well-known. The LCS being moved completely to cable? That's news.

Further down the road...?

Well, what else is available, with the MLB, NFL and NHL all settled on television until the early '20s? Fox is optimistic. There was already a report in the LA Times that suggests Fox will be an active player when the NBA's TV rights are up for renewal after the 2015-16 season. That report also suggests Fox would be on the hunt if NFL Network's Thursday Night Football package were suddenly to come up on the open market. Having MLB for summer and college sports is nice, but having access to both a summer and a fall/winter league -- particularly one in the NBA that gives the NBA a ton of programming -- would be a big coup.

Adding to that, in an Associated Press article from a couple of days ago, Fox Sports co-President Eric Shanks suggested the network would be interested in things such as U.S. Open tennis, and the Big Ten -- which already co-owns a network with Fox -- as potential suitors for the channel that could be gotten in the not-too-distant future.

It's hard to look at all that and be skeptical, but, as Awful Announcing's Matt Yoder mentioned today, FS1 will never look better than it does today, when everyone's all smiles and big promises. There are definite concerns. Baseball only airs one day a week, dedicating an entire night to the UFC -- without signature programs like The Ultimate Fighter -- could prove difficult. While Fox's nightly football show would be hard to screw up, its other two studio shows either A) haven't announced a cast yet, or B) star Regis Philbin. Those could easily turn out to be immediate flops, especially the Regis show.

While the network's college football and basketball lineups are probably the best of any network outside ESPN, they are still not as good as ESPN, nor do they feature any prominent tournaments (i.e. March Madness) or bowl games, and they won't get anywhere near either of them until the '20s. Baseball is only a day a week until the playoffs, and even then, Turner hasn't exactly set the world on fire with the playoffs on TBS.

But that's all dealing with the prospect of maybes and ifs. Fox presented a competent, impressive presentation on Tuesday with a ton of flair, as they often do on their sports broadcasts. They start out with enough stuff to keep them relevant within the world of major sports 12 months a year. They have good intentions, and are clearly willing to pay for big-name talent. They are ambitious. There's no reason the network can't be successful on its own, even if it isn't ready to take on ESPN for years. Both NBC Sports Network and CBS Sports Network have survived this long, haven't they?

That said, you may have to be the man to beat the man, but early on, Fox Sports 1 would be best off just not beating itself.

• ESPN has a "SportsCenter" problem, not a hockey problem

• 3 reasons why the NBA playoffs are better with the Lakers