Manchester City handled Chelsea at Eastlands last month, but against an Arsenal team that's used to dominating possession while playing patient soccer, the Citizens may need to make changes.

Arsenal's only previous meeting with a Roberto Mancini-led Manchester City came in late April That match saw Sol Campbell and Mikaël Silvestre start central defense, and while the idea of that pairing still elicits a chuckle, an uneventful match say the duo keep a clean sheet. Arsenal, however, was without Cesc Fàbregas and Andrei Arshavin, and in Robin van Persie's first match after a five month lay-off, the Gunners were also unable to muster a goal. In hindsight, the scoreless draw makes sense, given Mancini's customary contentment with a road point, though it offers is little information about Sunday's rematch at Eastlands.

As we try to anticipate what will happen tomorrow, April's match leaves us looking at this as we would any City match. We know what Mancini's going to do: six defenders (two disguised as midfielders) and the hope Carlos Tévez can win the match. If it's a dull match - one that's incurred the ire of both friends and enemies - it as an effective one. Manchester City sits second in the Premier League, an unquestioned title contender. As long as Mancini's ladrón can continue stealing matches, there's no reason why City can't continue contending.

The plan does, however, provide a relatively straight-forward prescription for slowing-down Manchester City: Stop Carlos Tévez. While that sounds like a gross simplification, consider how Mancini sets-up. Consider Manchester City's style and tactics. Then, consider that Tévez is the only City player who has scored more than one Premier League goal this season. Just as was the case when Mancini was in Milano, where his last teams were built around Zlatan Ibrahimovic, stopping his main scoring threat is often enough. While that is often difficult to do, it has the virtue of being an unambiguous solution. 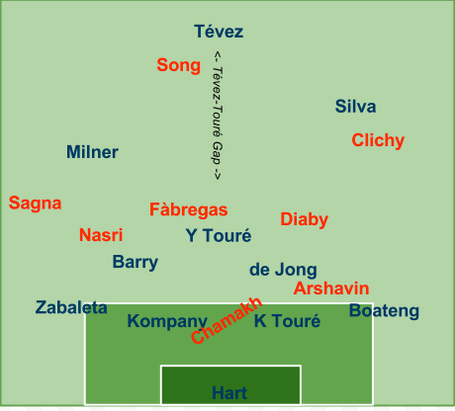 When Arsenal is in possession in Manchester City's half, this can be seen as (roughly) the team's base set-ups. The height at which Samir Nasri, Cesc Fàbregas and Abu Diaby can play will allow Arsenal to use the space about Yaya Touré to maintain possession and be selective with the chances they take.

City invites this problem by deploying a formation that leaves a huge gap between the Tévez and centrally positioned Yaya Touré. Tévez plays along the line while Touré, City's most advanced central midfielder, plays much deeper than most managers deploy their next-highest man. Sometimes Mancini augments this by allowing David Silva or James Milner to venture into this chasm; still, conventional link-up (and build-up) through the middle is almost non-existent. In addition, by ceding this area, City allows fifteen yards within their own half in which the opposition can play. If their opponents have players who can possess, create in, and advance out of this area, City can be exploited. This is why Chelsea's Frank Lampard was so missed when the Blues ventured to Eastlands.

Examining Arsenal's personnel we see a number of players Arsene Wenger can utilize in this area of the pitch. Cesc Fàbregas is the obvious, but Samir Nasri and potentially Denilson (should he be selected) can also be dangerous at that level, with Arsenal's wealth of options allowing players to freely flow in-and-out of Manchester City's defense. The Gunners will be able to probe City's set-up and, when initial questions are answered, withdraw to the level above Touré while maintaining possession. Unless City adjusts to pursue Arsenal at that level, a Gunner side often criticized for their patience may be able to slowly stretch City's defense. Once that happens, Arsenal's ability to string together short passes in small spaces will lead to chances, with the presence of Marouane Chamakh preventing City's central defenders from readily filling to gaps.

It's difficult to overstate the importance of the chasm above Yaya Touré. City's defense may be the best in the league, but any defense will eventually break if their opponents are given enough chances. Granted, "enough chances" often entails more than 90 minutes, but against an Arsenal team that can use the space behind Tévez to maintain possession - playing negative balls back to midfielders who can quickly change the point of attack - Arsenal could see possession advantage sufficient to give them more chances than 90 minutes worth of chances. Mancini may need to use Touré higher - not his forté - or use Milner and Silva more centrally, something that would give Barcay Sagna and Gaël Clichy greater license to push forward.

Arsenal's ability to play in the Tévez-Touré gap also has implications on City's attack. Clearly, the more possession Arsenal has, the fewer opportunities City has to score, but consider how Arsenal's midfielders are likely to be deployed. Not only will defensive midfielder Alexander Song be there, but Nasri, Fàbregas, Denilson or Abou Diaby could, by virtue of their positions while Arsenal's in possession, be in position to prevent City from effectively countering attacking or linking-up with Tévez. At those points when Arsenal loses possession, their attacking tactic likely leaves one or two extra midfielders out in front of City's break. 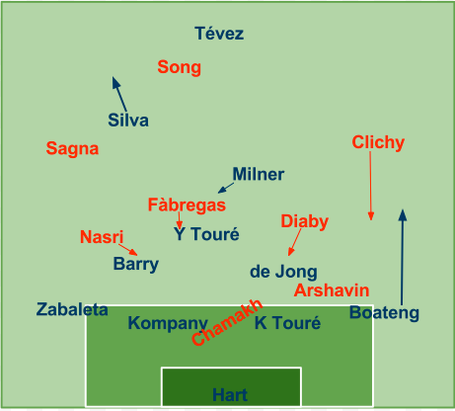 Taking advantage of James Milner's defending by moving him to the middle could offset the advantage Fàbregas and Nasri provide Arsenal. Silva becomes more important in getting City into attack, now the only player between midfield and Carlos Tévez.

That's why the key to this match may be how Mancini uses Milner and Silva. Milner's defending makes him the perfect player to come inside and disrupt Arsenal's ability to exploit the empty space. Silva gives City a creative option that can be deployed wide, allowing the Citizens to go around what could be a congested middle. If deployed on the left flank, Silva can help pin back Sagna and prevent Arsenal for outnumber City on their (slightly) weaker side. If deployed on the right, Silva will be matched-up against the weaker defender (Clichy). Regardless, the Spaniard's ability to get City into attack could be crucial in a match where they could have less than forty percent of the possession.

Roberto Mancini's deployment has been scrutinized for its negativity, but given City's position in league, those choices have been justified. Against Arsenal, however, Mancini's tendency to use a deep central midfield could cede too much possession to an opponent comfortable holding the ball for long periods of time. If Arsenal's patience doesn't lead to chances, it will at least limit the opportunities City will have in attack. Against a team whose style and tendencies provide and antidote for their set-up, City may need another approach to get three from Arsenal. And as we saw during the first half of City's match at Bloomfield Road, flexibility is something they've yet to develop.