PHOTO: Was Alvaro Saborio Offside On His Opening Goal For Real Salt Lake?

Share All sharing options for: PHOTO: Was Alvaro Saborio Offside On His Opening Goal For Real Salt Lake?

Alvaro Saborio broke the deadlock between Real Salt Lake and the Seattle Sounders in the 43rd minute when he tapped in a ball from Chris Wingert, but while he was back celebrating with his teammates, the Sounders were arguing that he was offside and referee Mark Geiger was discussing it with his linesman. The assistant referee ruled it good when it happened and after considering it again, he ruled it good once more. Salt Lake goes up 1-0, but was it the right call? Thanks to a photo by our very own Zach Woosley, we can see fo ourselves. 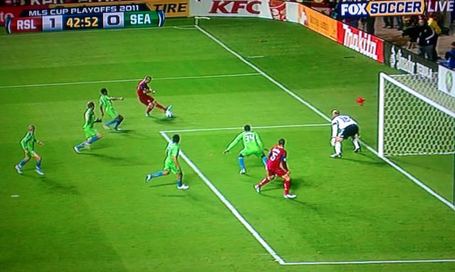 Because the camera angle isn't perfectly even, it's tough to tell for sure, but it would lean towards onside, right? Or maybe offside? It's too close to tell for certain, but had Seattle tried defending instead of letting Wingert walk his way in then this wouldn't be a problem. The reality is it counted and Salt Lake has the opener.