The match between La Liga bottom feeders Granada and Mallorca--which, incidentally, Granada was winning at home--had to be suspended Sunday night because an umbrella--thrown by a fan--struck linesman Xavi Aguilar in the face, drawing blood. The young referee dropped to his knees immediately after the agression, though he was able to stand up and walk off the field under his own power (albeit with blood pouring from his face).

No one is sure exactly why this happened--as I said before, Granada, the home side, was leading 2-1 after a brilliant goal from Martins (dedicated to his sick son Gustavo). As of 11:45 CET, a 15 year-old had been arrested, but no motive had been released.

Yeah, we have a picture. And yeah, it'll probably satisfy at least some of your daily bloodlust. 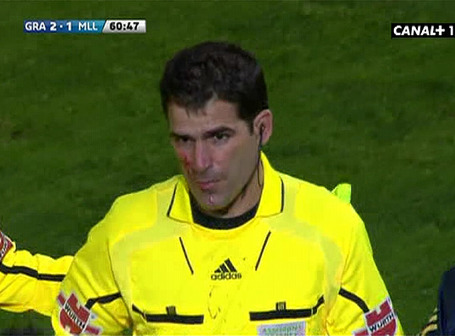 So you're probably asking yourself: an umbrella? Really? Doesn't that kid know he could have put out this poor linesman's eye? And I'm going to go ahead and respond by asking whether it's too soon to make the obligatory "referees/blindness" jokes yet.

In all seriousness, this was a genuinely terrifying moment, and we're all very, very lucky nothing worse happened. The game will be resumed without fans at a later date, according to the Spanish federation.