In this, the first of a three-part SB Nation Series on Akron soccer, editor Jeremiah Oshan examines how Zips coach Caleb Porter balances academic excellence with becoming the NCAA's foremost producer of professional talent. Part 2 will discusses why style need not be sacrificed for success on the field, while Part 3 looks at the culture and community Zips soccer has promoted.

Teal Bunbury calmly stepped to the penalty spot and prepared to take arguably the most important kick of his career. It was, after all, just his second appearance for the United States National Team. A successful kick would be the equalizer against Chile, the 15th ranked team in the world. A miss could have been the kind of thing that haunted a young player like Bunbury.

Starting his approach from the edge of the penalty area, Bunbury took three slow strides before taking five quicker ones. The goalkeeper went to his right. Bunbury's kick went to the opposite corner, where the ball met twine.

Bunbury ran toward the corner flag and did a celebratory dance, prompting Telefutura announcer Pablo Ramirez to proclaim, "I Like The Boon Boo Ree." The goal and Ramirez's call have become a Youtube sensation, giving an otherwise mundane game a signature moment.

For a group of fans positioned just a few rows from where Bunbury performed his dance, the moment was plenty memorable even before they heard the audio. Sitting with several members of Bunbury's family were MLS players  Steve Zakuani, Blair Gavin, Ben Zemanski and Zarek Valentin. All had come primarily to see Bunbury make his first appearance on U.S. soil wearing the Stars and Stripes.

If the image of a bunch of professional soccer players cheering wildly at the accomplishments of someone who is no longer a teammate seems strange, perhaps it shouldn't. Zakuani, Bunbury, Gavin, Zemanski and Valentin share a bond that is proving to be a strong one in soccer: all attended the University of Akron. It's a bond forged in a program where athletic achievement is valued along with academics, where attractive soccer is the product of competitive practices and where the team has been at the center of a tight-knit community.

"All these guys are great people off the field and on the field," Bunbury said. "We were together so much that we built a strong friendship and a strong bond. It was easy. I truly care about what they are doing and how their lives are going. Our friendships grew from Akron and continue to grow now." 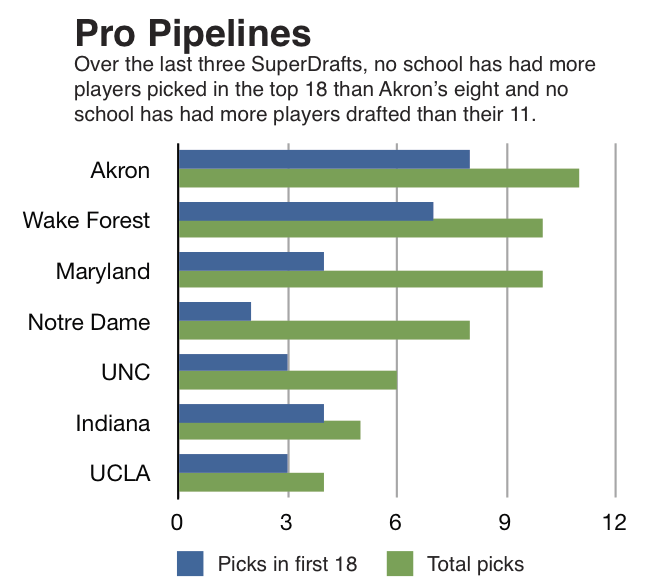 In the last three years alone, Akron has supplied 11 players to MLS, more than any other school. Eight of those players were picked within the first 10 picks of the draft and five of them were picked among the first four.

While the easy conclusion might lead you to believe that Akron is little more than a pro-soccer player factory, the reality seems to be far more nuanced. Akron head coach Caleb Porter is undoubtedly creating professional athletes, but he's doing it in a way that belies the conventional image of what that means.

"Every preseason began with him saying, 'You’re a student first and an athlete second,' " Zakuani said. "I really remember those preseason meetings. I’ll never forget that. If you fell behind on your studies and your grades dropped, you wouldn’t train. He took school seriously. He was talking to our teachers all the time. I used to hate it, but I appreciate it now."

Like many of his Akron teammates, Zakuani left school early. After leading the nation with 20 goals during his sophomore year, Zakuani signed a Generation Adidas contract and was made the top pick in the 2009 MLS SuperDraft. After winning the Hermann Trophy - given to college soccer's best player - Bunbury left early as well and was the No. 4 overall SuperDraft pick. All five of the Akron players taken in the first round of this year's draft also left early, with No. 3 overall pick Perry Kitchen leaving after his freshman year.

For some, this is further proof of the "factory" label. How serious can students be if they're not even sticking around long enough to get their diplomas?

Of course that ignores a primary role of college: Preparing students for their careers. While many college coaches seem to fall into one of two categories - either they emphasize school and all but force players to stick around for four years or they openly recruit aspiring pros and let them slack on school - Porter seems to have succeeded in finding a middle ground.

"When I got to Akron, there were a lot of local players, a lot of guys whose dream was playing in college," Zakuani said. "He started bringing in guys who wanted to play beyond college. I remember meeting Kofi Sarkodie, this guy was a pro from Day 1. He was acting like a pro, training like a pro, behaving like a pro. The same for Teal Bunbury. We would be in the dorms saying, Oh, we are going to play in this league or that league and play against each other.

"That came from him. Our training sessions were just like that. They were competitive, they were fun. It was a bunch of guys who really believed they could play pro and they made it so. It’s important to play at the next level and he’d say he’d never stand in our way if we wanted to leave early. I think that says something about him that he could have held them back. I could have stayed for my senior year and we would have all been playing together (this year), but it comes from him."

The poster child for this kind of student/athlete duality has to be Sarkodie, the ESPN Academic All-American of the Year who posted a 3.96 before being picked No. 7 overall in the SuperDraft midway through his junior year. Despite being one of the highest rated soccer players in the country throughout his youth, he earned straight A's and enrolled at Akron as biology major with the intention of eventually attending medical school. Only a B+ in ecology and an A- in physics robbed him of a 4.0, and he now says that he intends to finish his degree and maybe even fulfill his dream of becoming a doctor after his playing career is over.

"The way that Caleb runs the program, it’s been awesome," Sarkodie said. "The standard from Day 1 when I got there was perform on the field, but right away get to class and make sure you’re doing your work off the field.

"You’re going to need something to fall back on. Soccer is a short career. Maybe you can play until your mid-30s, but you still have a lot of life left. Coach Porter really emphasized that. Let’s put 100 percent into playing, but also put your all into school. It’s emphasized all year around. It’s the culture that we have at Akron: to be equally in tune to the classroom and the soccer pitch."

Making it easier for a player like Sarkodie to succeed in the classroom and on the field is an environment that celebrates that kind of achievement. Zemanski, for instance, earned a degree in mechanical engineering. All seven players who were drafted this year had GPA's over 3.0, led by Kitchen's 3.945. Joining Sarkodie on this year's Academic All-America team were Anthony Ampaipitakwong, Chad Barson and David Meves.

To be sure, there's a fine line that Porter is walking. On one hand, he's recruiting players who know college is a stepping stone to the pros, but he's also bringing in players that are going to class and keeping up their grades.

"We pick a certain profile," Porter said. "Our niche has been to get soccer junkies who are also good students. If they wanted to party, they wouldn't come to Akron. They are here to focus on soccer and focus on a certain culture. Those are the kids we attract and the kids we go after.

"We don’t get the kids that want to be at the biggest name, in the best conference. I don’t claim to have the best campus. There are better schools  out there. But I don’t think there’s a soccer environment that’s better than ours. Most of our kids are honors students. They're getting a great academic experience. The balance of the two, I don’t think there’s a better situation."