Share All sharing options for: Timbers Army Put On Show For National Audience

Last night Major League Soccer fans were treated to something a little different and pretty cool too. While the fans of DC United, Toronto FC, the Philadelphia Union and the Seattle Sounders may view their supporters in a higher standard than most clubs; the Portland Timbers supporters, the Timbers Army, certainly knew how to make a nice first impression.

Then it was the amazing tifo display after the national anthem. (Photo via Oregonlive.com) 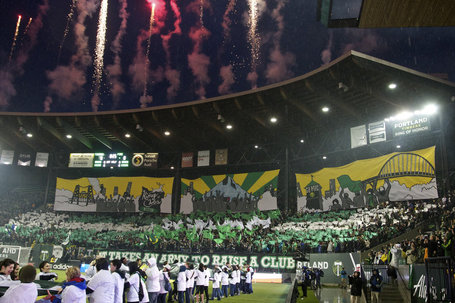 The chants and singing didn't stop until the very end. I recalled the first Sounder game on TV a couple seasons ago, thinking how impressive their fans were on that night. Last night was no different as the Timbers Army were loud from minute one until the final whistle.

The bar has been raised yet again in MLS for fan support. Team supporters around the league need to take a good hard look at how teams like Portland, Seattle, and DC (to name a few) do things here. It was this kind of atmosphere last night that showed the league is growing at a rate few could even imagine 10 years ago.