In 2003, Cesc Fabregas left FC Barcelona in search of playing time he thought he wouldn't get at the Camp Nou. If they bring him back, they could be creating the same situation for themselves all over again.

Share All sharing options for: FC Barcelona's Purchase Of Cesc Fabregas Would Start The Vicious Cycle All Over Again

Cesc needs to come home. It's all the public has heard about Cesc Fabregas over the last two years. Very little has been written in the press about the footballing abilities of Fabregas, except for how highly FC Barcelona players rate him. His transfer back to Barcelona, the club where he developed his skills as a youth player, has been seen as such an inevitability that it seems like very few people actually want to talk about how Arsenal play football with him in the team.

Oh, there's been plenty of talk about how Arsenal might move on without him. Will Jack Wilshere move into a more advanced position and take over the responsibility of dictating play? Does Arsene Wenger have another young star - perhaps the next Fabregas - in his sights? Nevermind the fact that Fabregas is under contract with Arsenal and that they're fighting, though unsuccessfully, for trophies. Life after Cesc is what matters.

Unfortunately, there's the problem of Xavi Hernandez and Andres Iniesta locking down positions that Fabregas would never get a sniff at if they remained healthy. This isn't the first column that points out that Fabregas wouldn't be a first choice starter at Barcelona, nor will it be the last. However, the impending groove in a Camp Nou bench chair that may soon be perfectly formed to Cescy Football's rear end is not what is important here. What is important is money and the careers of those coming up through La Masia.

Let's rewind back to 2003. Fabregas, a 16-year-old in Barcelona's academy, sensed that his opportunities at the club would be limited. A then 23-year-old Xavi had solidified his place in the first team, while a 19-year-old Iniesta was just beginning to make an impact with the senior side. Between those two players and who knows how many highly regarded youth players who have since amounted to very little, Fabregas felt that he had little to no chance to break into the first team at the Camp Nou. So, Cesc moved on to greener pastures, playing in a couple of first team games as a 16-year-old with Arsenal.

The well-regarded but not absolutely lauded Fabregas developed into a world class superstar in subsequent years with the Gunners, eventually making his debut with the Spanish national team in 2006. He was a rare superstar player who got away from Barcelona. Unsurprisingly, rumors of a return to the Catalan club eventually popped up.

Fast forward back to 2011, and Barcelona are reportedly hot on the trail of Fabregas. They have already made one bid, which Arsenal immediately rejected. They're rumored to be making another one, but it will still be a bid considerably smaller than the £40m that Arsenal supposedly want for their star. Based on recent transfer fees for players like Kaka and Javier Pastore, along with the bids that Tottenham Hotspur have rejected for the services of Luka Modric, this is a perfectly reasonable price.

However, there are a couple of problems beyond whether or not Fabregas will be a first choice starter for Barcelona that might keep them from coughing up £40m for him. Not the least of which being that they probably don't have that much money.

For the first time in their history, Barcelona will have a shirt sponsor for the 2011-12 La Liga season. The purchaser of that sponsorship was the Qatar Foundation, and the sponsorship deal is reportedly the most lucrative in world football. This shirt sponsorship does not allow them to go out and buy whoever they wish, however. It might simply allow them to sustain their current level. Both their net debt and gross debt is well into the hundreds of millions of Euros, all while they're paying the highest average player salaries in the world.

The above-cited article that lists Barcelona's current debt also states that manager Josep Guardiola was given a budget of €45m for new signings. He just spent €26m of that on Alexis Sanchez, meaning he's currently well short of the budget he would need to acquire Fabregas. They will be adding to their budget with the sales of Oriol Romeu and Jeffren Suarez, but not nearly enough to buy back the player they supposedly covet the most.

Though the board would almost certainly be willing to kick in a few million Euros if it was the difference between buying and not buying Fabregas, it would be unwise. Spending money one does not have is almost always unwise, especially when it's spent on things that are completely unnecessary. There's more too this story, though, and a reason beyond immediate financial and footballing practicality why the Blaugranas should stop pursing Fabregas.

The answer is simple: To avoid a repeat of the Cesc Fabregas situation. 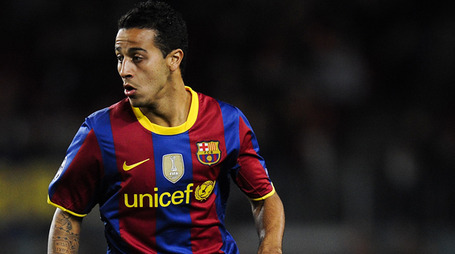 Right now, waiting in the wings to become a future Barcelona legend is a young man by the name of Thiago Alcantara. He has been a highly touted youth prospect for years and has lived up to his hype, progressing at a faster rate than his coaches and most scouts projected. He's proven himself as a star in the B team and a competent player at worst with the first team, making a number of solid appearances. Pep Guardiola has said himself that Thiago is farther along in his development at the age of 20 than Xavi or Iniesta were at the same age.

It's only preseason, but Thiago is currently on an absolute tear on Barcelona's preseason tour, scoring ridiculous goals and putting on magical passing performances. In a friendly against Manchester United over the weekend - a United team that played close to a first choice squad - Thiago was the clear man of the match. He is not yet as good as Xavi, Iniesta or Fabregas, but there's no doubt that he will be soon.

The incredible thing about FC Barcelona and La Masia? He's not the only one. His younger brother Rafael Alcantara, better known as Rafinha, is widely considered to have more raw talent than his older brother. He will likely have a serious role with Barcelona B in the Segunda this season and is an impressive up and coming talent. He will be joined in the Barcelona B midfield by Sergi Roberto and full Mexican international Jonathan Dos Santos, both of whom had made their senior team debuts.

If they do not have serious health problems, all of Thiago, Rafinha, Dos Santos and Roberto are stone cold locks to become - at the absolute worst - reliable La Liga midfielders. The ceiling for all of them is around the level of Fabregas.

Right now, all of them will already feel like their chances to eventually make an impact on the Barcelona first team are potentially limited, simply because of the presence of the other three players. It seems reasonable to assume that those feelings will only increase exponentially if Fabregas, who is only 24, is brought into the club. At that point, a couple of those players could look for moves away from the Camp Nou, as they feel their chances at getting a look at the first team are limited.

And that's when the Fabregas problem could present itself all over again. If Fabregas is brought in, the talented young midfielders behind him will be forced into a choice: Risk stunting their growth by not playing or leave the club that they love in search of playing time. When Fabregas faced this dilemma, he chose to leave in search of playing time. It didn't matter how much he loved the club, he had to do what was best for his career. He was correct, and his decision has ultimately hurt Barcelona. They lost a world class footballer without gaining any kind of financial reward, and to get him back they will have to pay through the nose.

Barcelona don't need Cesc Fabregas, and they never have. If they disagree, they're going to find themselves needing the next Cesc Fabregas five years down the line. Actions have consequences beyond what is on the surface, and Barcelona will come to regret their decision if they bring back their departed golden child.