During today's FA Cup game between Chelsea and Leicester City, England defender Gary Cahill opened the scoring from a corner in the eleventh minute and revealed a touching tribute to former teammate Fabrice Muamba in a pre-prepared t-shirt under his top. You can find the picture after the jump. 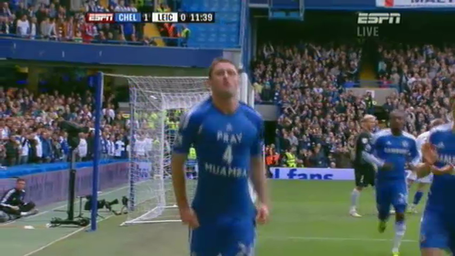 The "Pray 4 Muamba" hashtag has trended worldwide on Twitter in the wake of the horrifying incident at White Hart Lane yesterday, and tributes from the football family across the globe have been coming in every minute. One of those came yesterday evening as following his side's win over Fiorentina, Juventus midfielder Andrea Pirlo dedicated the victory to Muamba.

A great tribute from Cahill, who played alongside Muamba on several occasions for multiple teams. In addition to being a teammate of Muamba's at Bolton, he also played with the midfielder for the England U21 side whilst Stuart Pearce was in charge. Also whilst Cahill was at Aston Villa, Muamba was on loan from Arsenal at cross town rivals Birmingham City.