There's been quite a lot of attention given to perceived homophobic remarks in MLS circles this year. It's been mostly negative attention, understandably. Section 8 -- the Chicago Fire's main supporters group -- gave us something positive to talk about on Sunday.

They unveiled a rather enormous piece of tifo that read "Our City Our Club Our Diversity Our Strength" over a rainbow backdrop. Unless I'm wildly misreading this, it would seem to be strongly supporting the gay community. Check it out: 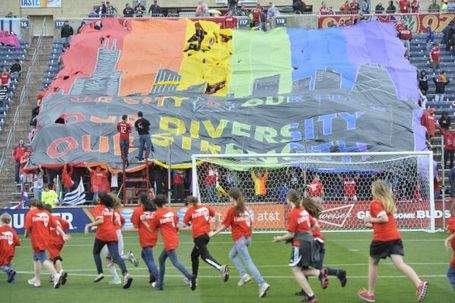 via Hot Time In Old Town

The tifo was part of the "Show racism/homophobia the red card" movement that has been sweeping various MLS supporters groups. This is clearly a positive movement, but no group has taken quite this much of a stand. Section 8 definitely deserves to be applauded for their efforts, which will surely prove controversial in some circles.