The United States has new jerseys every two years, but only a select few qualify for the American Soccer Halls of Fame and Shame.

Share All sharing options for: The Inaugural Inductees To The United States Soccer Jersey Halls Of Fame (And Shame)

The United States debuted its new home jersey for 2012 and 2013 on Monday, showing the world its new candy cane jersey. Like most jerseys, there are long lines of people who both hate and love it. Leading the line of people who love the new jersey is Waldo, while anyone who wears a lot of black is staunchly anti-horizontal stripes and in front of the line of new jersey haters.

New jerseys are a new thing for the U.S., and really any soccer team for that matter. They get new jerseys every two years and it has been that way for more than 20 years now. This is to best honor the country, its ideals and everything patriotic about America, specifically selling lots of jerseys and making more and more money.

In that spirit, we present to you two new halls of fame, which nobody asked for nor will ever visit, like most halls of fame. But please visit and give your money. 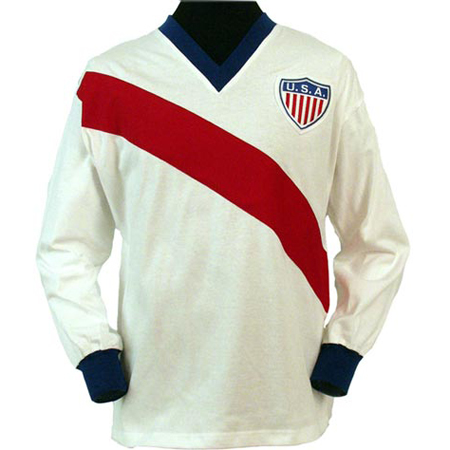 First of all, that's a sweet looking jersey. Red? Check. White? Check. Blue? Check. It's clean and simple and there really isn't any room for complaints. It also has a simple and solid crest that doesn't have random shooting stars, er, ball, and was not designed on a Macintosh II.

More than anything, though, this jersey was worn during a moment of U.S. soccer glory. The Americans defeated England at the 1950 World Cup in Brazil wearing this jersey and in U.S. soccer, there aren't a lot of marquee wins to hang hats on, but this is one of them. The U.S. went to a continent it would wreak havoc upon for decades to follow and toppled the country that once wreaked havoc upon it. Why Abraham Lincoln isn't wearing this jersey on the Lincoln Memorial is beyond me.

Verdict: If this jersey was a person it would pound Budweisers and piss freedom. 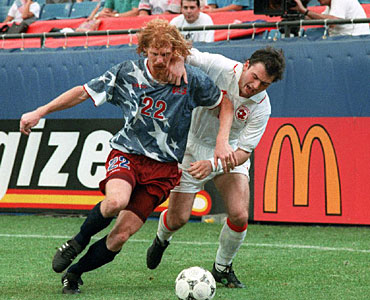 Verdict: This one gets 10 gun-shaped apple pies. 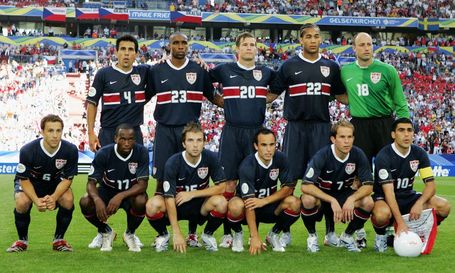 This one has it all. First, there's the nod to tradition, as the horizontal stripe across the front harkens back to the 1995 jersey that the Americans wore. Unlike the 1995 jersey, though, there is no collar on this jersey, which is key. On the field, collared jerseys look fantastic, but for the guy walking down the street wearing the jersey, you look like a tool (especially if you're over 40, in which case you probably should have given up jersey wearing a long time ago).

It's also a just plain good looking jersey, with enough going on that it is not a bore, but still looks classy. Finally, the U.S. went down in flames at the 2006 World Cup and what is more American that failing miserably in a World Cup on European soil? History, class and predictability. Got it.

Verdict: Barack Obama gives it a thumbs up. 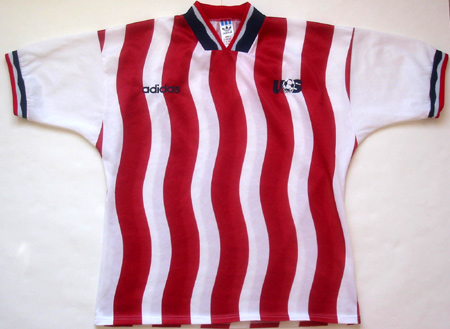 You're going to have some problems trying to pull off the flag look, but wavy stripes to make it look like a flag in the wind? This screams 90s and not in a good way.

Verdict: The only thing that could have saved this jersey if if they went with the full body look. 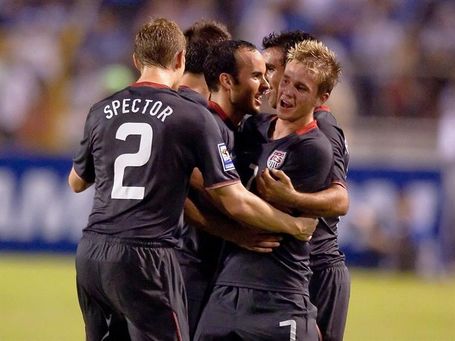 The 1994 World Cup jersey, with its waving striples, was an attempt at uber-America, so is the jersey that the U.S. wore during 2010 World Cup qualifying anti-America? Worst of all, it was the jersey they wore when they beat Honduras and clinched qualification for the World Cup.

You will notice the absence of blue, the minimal red and minimal white. That's because the jersey had to be grey, or "anthracite" to be specific, which just screams freedom liberty and cheeseburgers, right?

Verdict: Step one of creating a U.S. jersey for any sport: Pick red, white or blue.

AH! THE COMMIES ARE COMING!