Köln Supporters Not Too Happy About Relegation

Share All sharing options for: Köln Supporters Not Too Happy About Relegation

FC Köln hosted Bayern Munich at the RheinEnergieStadion on Saturday. The home side knew that a win or draw would guarantee they avoid direct relegation to the 2.Bundesliga. It didn't matter what happened in the capital between Hertha Berlin and Hoffenheim as long as Köln took care of business at home against Bayern.

Well, things went pear-shaped in a hurry. Thomas Müller scored in the 34th minute, and then Bayern added three more in the second thanks to an own goal from Pedro Geromel, Arjen Robben's left foot, and another from Müller.

Add to this the report from the capital that Hertha Berlin had just beaten Hoffenheim. With a few minutes remaining, things appeared to be getting ugly in the stands.

Flares and smoke bombs were lit in the stands, and an ominous black cloud hung over one end of the stadium as the seconds ticket away. 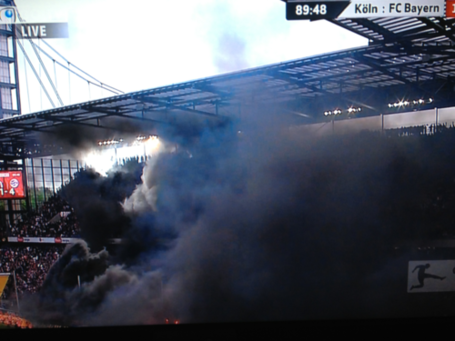 The referee blew the final whistle with around 5 seconds remaining in the match. The Bayern and Köln players along with the referees ran off of the pitch. Lukas Podolski seemed to linger on the pitch at midfield looking at the scene around him in what was his last match as a member of Köln before he departs this summer for Arsenal.

Thankfully, it appears that the smoke was caused only by flares and smoke bombs. There has not been any reports of a fire.