In the near constant game of one-upsmanship, Timbers Army have launched the latest salvo. Their massive tifo before Sunday's Cascadia Cup showdown with the Seattle Sounders was absolutely breathtaking in its sheer size and artisanship.

There's something for just about everyone in there: The flags of Portland and Cascadia; the crests of the Timbers Army and the Portland Timbers; a depiction of the Portland skyline; and image of Pacific Northwest soccer legend Clive Charles. All of it under the perfectly powerful, yet tasteful message: "Legends are born when the previous are surpassed." 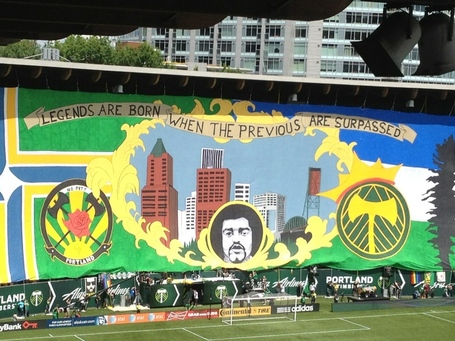 All of it was a clear celebration of all things Portland with only a mildly backhanded nod to their rivals.

Just how massive was the display? It literally covered the entire North End of Jeld-Wen Field. Shawn Levy has the nitty-gritty stats: