Fernando Torres' Daughter Knows Nothing But Spain Winning, Is Adorable

Share All sharing options for: Fernando Torres' Daughter Knows Nothing But Spain Winning, Is Adorable

Fernando Torres's daughter, Nora, was born in July 2009. Spain has not lost in the knockout stage of a tournament since she was born. That makes her showing up on the pitch after Spain's 4-0 evisceration of Italy to celebrate with her padre a sweet little thing to see.

Of course, it doesn't hurt that she was wearing pigtails with her father's jersey. 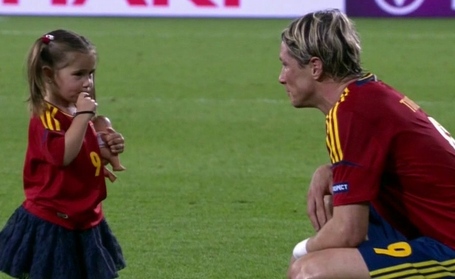 Since July 2009, Spain has just one loss in an international competition (to Switzerland in the 2010 World Cup) and has compiled a staggering 23-1-1 record in those matches. And the tie? It came mere weeks ago, against Italy in a group stage match at Euro 2012. All Spain did on this Sunday was avenge that rare interruption of dominance by crushing Italy by the largest margin of defeat the azzurri have ever known in a Euro competition, and the largest margin of defeat in all competitions since 1957.

Nora probably doesn't realize how good she has it.

We have live coverage of the match in our Spain vs. Italy, Euro 2012 StoryStream. For more on Euro 2012 and the entire world of football, follow @SBNationSoccer on Twitter.

Spain Vs. Italy, Euro 2012 Final: La Roja Are The Champions Of Europe