You too can find discount Cosmos and soccer gear, along with people willing to trade jerseys with you. Give us a few minutes and we'll tell you how.

Share All sharing options for: The Great Cosmos Gear Hunt

The New York Cosmos are back! For real this time, they're going to field a team...really, they are. I know, I know, you're dubious, but seriously, the Cosmos are back. They'll begin play in the NASL next season, you can find all the exciting details here, and I'm sure that everyone is curious about how you too can get all your Cosmos gear ahead of the return of easily the most well known soccer franchise in America...even if they haven't played since 1985.

You could go to their website and choose from a variety of good looking shirts and jerseys created by their sponsor Umbro. Of course, that's expensive and who wants to spend more money than they have to. After all, the economy is struggling, gas and food prices are high, the American soccer fan has a budget and dropping hundreds of dollars to become a properly attired Cosmos supporter is just not an option.

So I asked myself, what can I do to help. How can I lead the public to magnificent deals on Comos gear?

In the past months more and more official Cosmos gear by Umbro has been showing up in discount retailers like Ross and TJ Maxx. In fact, I've picked up a home jersey, a warmup jacket and three t-shirts, all officially licensed Umbro products, over the past few months. I've probably visited upwards of 20 different stores throughout the Dallas/Fort Worth area in the process, but in total I've only spent roughly $49 on Cosmos gear. Yep, $49 bucks. The jacket alone retails for close to $100 on the team's website. 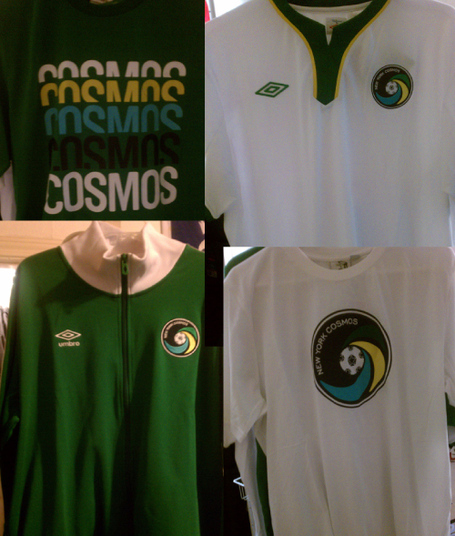 Some might say I have a bit of an obsession, maybe even a problem. Have I stopped at six different Ross stores during a drive from downtown Dallas to my home north of the metroplex? Yes I have. Judge me all you like but I have some cool stuff thanks to the effort. England national team jerseys, a Pumas jersey, multiple MLS team jerseys including the Galaxy, Earthquakes, Red Bulls and Union.

Why am I giving away this secret? Well, it's not really a secret anymore, and it's important that everyone who is ready to jump on board the Cosmos bandwagon (or just wants cheap jerseys and shirts) can do so in style and at a budget friendly price. It's a community service really, although some hispters might get upset though as the Cosmos are about to become more mainstream again, especially if they bought Cosmos shirts off the website at full price.

There's more to this story than just finding discounted stuff for a 2nd division soccer team. If you have no interest in Cosmos gear, there's still a way to find other team's merchandise.

I've become part of the jersey trading community that has grown up around the game here in America. Throughout the year, fans of the beautiful game and the gear associated with it buy and trade jerseys, shirts, jackets, scarves and more. Using Facebook groups like the cleverly titled "Soccer Gear at Ross, aka Soccer Swag Mafia" or a Twitter hash tag, #SwapOfTheTable, fans trade jerseys and other items in a glorious underground free market economy. It's a big deal for some, and a great way to expand and diversify your collection.

At the core of the community, and why it's economically feasible, are stores like Ross, TJ Maxx and Marshalls. All feature merchandise sold on by other retailers and offered to consumers at considerable markdowns from retail price. Instead of playing $80 to $120 for a jersey, you can often find the same items for $20-$30 dollars with some patience and luck. Admittedly, it's a crap shot, a treasure hunt of sorts, with no guarantees. That's part of the fun though: you really never know what you might find when you visit a store.

Many of us will purchase jerseys that we have no interest in ourselves, because we are hoping to find someone through Facebook or Twitter that might want to trade something in their collection for what we found.

As more and more people have begun to discover, they often have soccer gear. Over the past year since I started hunting for jerseys at stores like this, I've found numerous authentic and replica jerseys for European, MLS, National Team and Mexican clubs. In most cases jerseys cost less than $30, with authentics being the most expensive.

You can also check out factory outlet stores for adidas and Nike that are often in your regional outlet mall, if you have one. The adidas stores in particular will carry closeout MLS team gear from the past season. My collection of soccer jerseys has gotten slightly out of hand thanks to treasure hunting these stores and through the aforementioned trading community.

So the next time you're driving around and see discount retail store stop in and peruse their wares. You never know what you might find. If you're looking to get involved with jersey trading, check out the communities mentioned above, it's just another and different way that you can get involved with the game of soccer.

New York Cosmos Will Return To NASL In 2013