Chris Wondolowski is on pace to break Roy Lassiter's single-season scoring record, which has stood since 1996.

Now might be a good time to start dusting off the old MLS record books because Chris Wondolowski is looking capable of rewriting them.

Coming off his first hat trick of the season, Wondolowski now sits on 17 goals through the San Jose Earthquakes' first 20 games (he's played in 18). If he keeps up that pace, he'd score about 29 goals. In other words, he's actually got a little bit of wiggle room in order to finally topple Roy Lassiter as the single-season goals leader in MLS history. Lassiter set that record way back during the inaugural year of 1996 and really hasn't had much to worry about since at least 2002, when Carlos Ruiz burst onto the scene by scoring 24 goals in 26 games.

*-denotes led the league; #-denotes active
Note: MLS counted all goals scored in overtime until ties started to be counted in 2003.
Sources: Climbing the Ladder and Wikipedia

Even if Wondolowski's season were to end today, his goal total would already rank as the 21st highest in MLS history. With two more goals he would vault into the top 10 and with three more, he'd be the first MLS player since Landon Donovan in 2008 to score at least 20 goals in a season. If Wondolowski can pass Donovan, he'll have scored the most goals in a season since overtime was scrapped following the 2002 season.

Wondolowski might not pass Lassiter for the single-season record, but he has a very good chance to at least eclipse him another way: Most goals in three-year span. From 1996-1998, Lassiter scored 55 goals, which is remains the highest total in MLS history. Wondolowski currently sits on 51 goals. Carlos Ruiz (2002-04) is the only other MLS player to score as many as 50 goals in a three-year span. (Correction: Raul Diaz Arce is actually the three-year leader. He scored 56 goals from 1996-98.)

Comparing Wondolowski and Lassiter seems a bit unfair, though. Back when Lassiter was making his mark, MLS was a very different league. The gap between the best and worst players was huge which contributed to the league scoring 3.6 goals per game from 1996-98, a marke that has been on a pretty stable decline ever since. Although scoring is up a bit this year (2.64 goals per game), the three-year average is more than a goal less per game now than it was during Lassiter's heyday (2.55). It's worth noting that all goals scored in overtime are counted in the official MLS record book, but that Lassiter never scored in overtime.

What makes this all even more remarkable is that Wondolowski entered his age 27 season with seven career goals and just 19 starts during his five MLS seasons.

Even the Earthquakes, who traded for him in 2008, didn't seem to know what they really had right away. This run of form didn't even start until Wondolowski was given a spot start during the third game of his second season with them. He scored a goal in the game -- against the New England Revolution -- followed that up with goals in each of his next four starts and, as they say, the rest is history. Wondolowski is now poised to become the first player in league history to lead the league in goals for three straight seasons.

After that first year, Wondolowski's success was mostly chalked up to catching lightning in a bottle. No defenses were exactly geared up to stop Chris Wondolowski back then and even as he was scoring about 53 percent of his team's goals, the scouting reports were still in their developmental processes.

His scoring rate dipped a bit in 2011, but it did show that there was something going on here other than defenses just forgetting that he existed. Despite opposing coaches now having a full season's worth of film and data, Wondolowski still managed to find space and score more than once every other game.

This year should cement the idea that, no matter what we may think of Wondolowski's other skills, his ability to put the ball in the back of the net is approaching world class. He's currently scoring at a rate of .94 goals per appearance, which is actually reasonably distributed throughout the season, as he's scored in 12 different games.

There are still plenty of doubters, though. They'll point to his lack of an international goal in eight appearances with the United States national team (Lassiter, by the way, only scored four times in 30 caps) and offer that as some kind of proof. Of course, that's a sample size of all of 242 minutes, which seems like a ridiculously small data set when compared to the 6,591 minutes he's played during MLS in the past three seasons.

Aside from the numbers, it's understandable to be skeptical of Wondolowski's skills. You won't see him slicing through defenders on 60-yard runs toward the goal. You'll rarely see him unleash some kind of spectacular laser from 25 yards. Rather, Wondolowski has an almost uncanny ability to get to a balls inside the box.

There's good reason for this perception, too: At least this year it's true to an almost hilarious degree. As this chart shows, of Wondolowski's 15 non-penalty goals, all but one of them has come from inside the penalty area and eight have come from inside the 6-yard box or just outside of it. 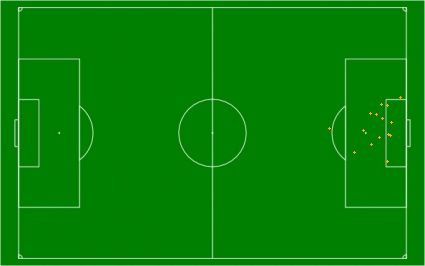 It seems absurd that a player with his goal-scoring record could possibly get that many looks from close in, but it lends a lot of credence to the idea that Wondolowski has some kind of magical powers that make him absolutely invisible to defenders.

Wondolowski is also fond of giving his teammates a lot of the credit for his exploits. While it may be tempting to write that off as the same kind of sports cliche that suggests a player is capable of giving "110 percent," it's not just lip service in this case. Every one of Wondolowski's goals from the run of play have been assisted. It's of little surprise, then, that the Earthquakes lead the league by a wide margin with 45 assists. D.C. United is next best with 36 and no other team has as many as 30.

Will the records fall?

Can Wondolowski possibly keep up this pace? It's a great question, and one that the data suggests is at least possible. MLSsoccer.com recently revealed that Wondolowski has converted just 7 of 18 "big chances", which is a shade below the league average.

The Earthquakes' schedule is also looking pretty favorable. Wondolowski has scored 10 of his goals in nine games at home where they Earthquakes play eight of their final 14 games this year. The Earthquakes also have six games remaining against four of the worst defenses in the league -- two each against the Portland Timbers and FC Dallas and one each against the LA Galaxy and Montreal Impact.

Wondolowski may not have the all-around game that brings big European clubs carrying suitcases full of money. But he's proven to be among the best finishers in MLS history. Call him a poacher, if you must. But it's time to recognize that this league has never seen anyone quite like him.