Nike introduced the brand new Nike CTR 360 Maestri III boot at its Beaverton, Oregon campus. The boot features a whole host of new technology and innovation that aim to improve the players control on the ball in order to create time and space on the field.

Share All sharing options for: Nike Continues Their History Of Innovation With New CTR 360 Maestri III

In a meeting room at the Tiger Woods Center on Nike's Beaverton, Oregon campus, the sportswear giant set the stage for what to expect in the brand new CTR 360 Maestri III boot by taking it back to the past. The presentation focused on the company's innovation over the last five decades from the original Nike boot (which retailed for $16), to the very 80's Air Strike Supreme, all the way to Neymar's Nike GS. The focus was heavily on the fact that Nike doesn't innovate for just one part of the game, instead, they innovate for all of it.

With that thought in mind, Nike took to introducing the latest iteration of the CTR 360 Maestri by targeting it at a very specific group of players: the midfield maestros. These are the players that control the tempo of the match through their touch, the ones that create time and space through their vision. In order to capitalize on this vision, Nike enlisted the help of Andrés Iniesta (FC Barcelona), Jack Wilshere (Arsenal), and Ganso (Santos). 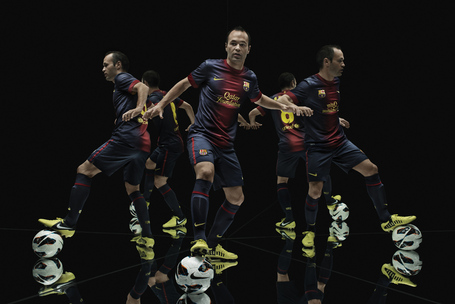 The most drastic change besides the eye-catching colorway is in the re-engineered "pass pad." Nike has completely removed the old design (an evolution of the pad from the original CTR) and introduced a series of fins on the instep of varying sizes. These fins "hug the arch and maximize contact with the ball, optimizing receiving and passing accuracy."

The Kanga Lite synthetic upper that made its debut on the original CTR 360 is back once again, packing more technology and science behind it to improve durability and touch. The upper also features "All Conditions Control" tech, which Nike says provides "the same level of control in either dry or wet conditions." The midfoot features a new dimpled texture which is said to increase friction on the ball, enhancing the player's ability to bring it down at the first time of asking.

Nike also introduced a new stud pattern pattern for the vibrant black & yellow boot, mixing round studs and blades to reduce pressure on the player's foot while allowing for more responsive movement on the field. The asymmetrical lacing also makes its return to the CTR series, again allowing for increased passing and receiving control.

Stay tuned for much more coverage on Nike's latest offering, including a full review later in the week.