That Appears To Be The Wrong Korean Flag

Share All sharing options for: That Appears To Be The Wrong Korean Flag

The Olympics got underway today as the Women's soccer tournament began. While the first match of the day in Glasgow's Hampden Park was an exciting 4-2 come from behind win for the USWNT over France, the second match has hit a bit of a snag.

The photo comes from James Crossan on Twitter of the video board in the stadium as the North Korean team was being introduced. Take a look at the flag next to the player bio being shown and if you're up on your current events, I think you'll spot the problem. 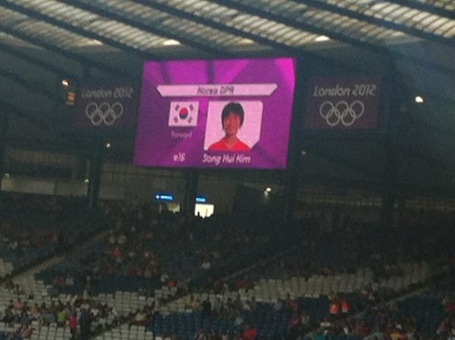 That's the flag of South Korea by the way and because of the mistake, the North Korean team refused to take the field. This may not seem like a big deal at first glance, but considering the precarious nature of the political relationship between the two countries, this is a major mistake.

I'd expect a Betamax tape of Kim Jong Un any day now blasting the Olympics, western civilization, America, who knows what else. He'll probably threaten to pull all of North Korea's athletes from the games and do some more missile tests. I know this sounds extremely tongue-in-cheek (because it is), but there's also admittedly a legitimate level of seriousness to this story.

My less than concerned attitude comes from the fact that North Korea probably shouldn't even be at these Olympics. After all, five players tested positive for PEDs at World Cup 2011 and the team is banned from the next World Cup in 2015.

The match was delayed over an hour as Olympic officials no doubt tried to negotiate with the North Koreans to leave their locker room. The team has finally come out on the field for warm-ups and the match just kicked off.

Nothing like an international incident on the first day of competition at the Olympics.