That's right, a new dawn for football boots because winning the weight race is not even close to the complete story for the GS. Instead, it's just the beginning.

There's a new player in the hotly contested "speed" boot game from Nike. The mean black & green GS has arrived to take the football world (and the world in general) by storm. Nike's global design director for football, Andy Caine said that the boot is the "lightest and fastest football boot" that Nike have ever made and it "really defines a new era in how [Nike] create, design, and produce elite football boots."

That's right, a new dawn for football boots because winning the weight race is not even close to the complete story for the GS. Instead, it's just the beginning.

Weighing in at just 160 grams (for a size 9), the Nike GS football boot comes in five grams lighter than its adidas adiZero F50 competition. The absurdly light weight figure was attained through the innovative use of lightweight renewable and recycled materials. 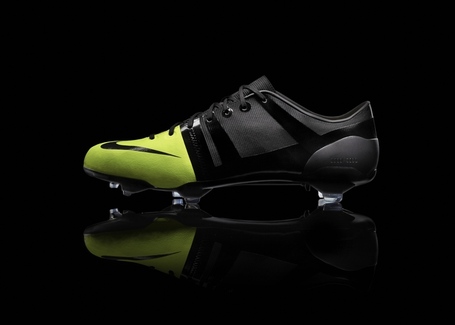 The polyesters, plastics, and Kanga-Lite upper (a synthetic material designed to provide the best of both leather and microfiber boots) are all familiar materials to new and old soccer players. Where the GS really shines is in just how much of it came from materials that are either very renewable or have been already recycled.

For the GS, Nike has introduced a new material called Pebax® Renu, a plant-derived material made of 97% castor beans. The beans were chosen because they require significantly less water to grow than other renewable materials that could have been used instead. The GS sole plate is comprised of 50% Pebax® Renu and 50% recycled thermoplastic polyurethane (TPU) which reduced the plate's weight by 15% compared to the likes of the Nike CTR or T90 Laser.

Nike's Better World initiative played a large part in the boot's development as strict environmental friendliness guidelines were in place for just about every part of the boot: 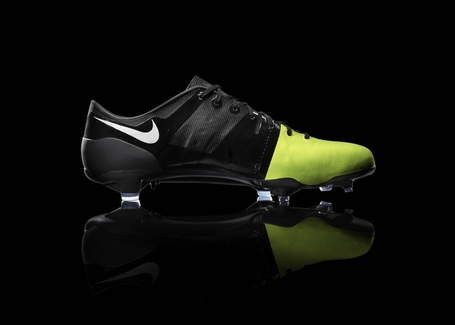 We don't know which mystery footballer (my money is on Neymar) will wear the GS on the pitch when it finally debuts, but we're sure that whoever it is will look good and be fast on the pitch.