The sports giant has finally unveiled the latest iteration of their famed Mercurial Vapor boot. The new footwear is all about speed and touch.

Acceleration and straight line speed is the aim of Nike's game here. Lightweight boots with strong construction and technologically-advanced materials will match the speed and technical nuances of the modern game.

The Vapor IX features a lot of the same hallmarks that have famously been part of the lineup for years. Snug fit and sharp looks are coupled with state-of-the-art features to create what should be the latest and greatest boot for superstars like Cristiano Ronaldo and Neymar.

The boot features Nike's All Conditions Control tech (the same kind found on the CTR 360 Maestri III that we had the chance to review) and aims to add that little bit of extra help to your touch when the weather outside is, well, frightful. The ACC technology is actually a coating applied to the boot's upper and allows you to get extra grip on the ball, something we were really delighted with in the CTR 360. 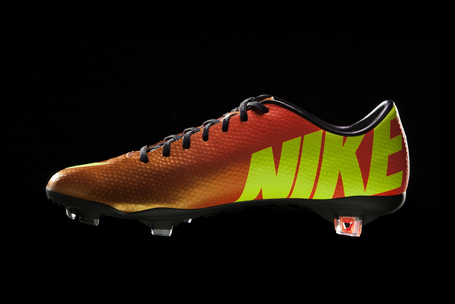 The major new innovation for the Nike Mercurial Vapor IX is the Speed Control texture. For this, you really need to think of a golf ball or the high-end running equipment that Nike showcased in the Olympics. Nike say that the new texture helps the upper conform to the foot even more, providing a snug, sock-like fit for the wearer "without compromising on the soft touch the player requires."

Fans will also notice the bold new look of the boot as well. The Vapor IX features the giant swoop as always but what's new is the giant "NIKE" emblazoned on the inside of the boot, in the back quarter. The Vapor launches in two colorways, Fireberry (for Cristiano Ronaldo) and Sunset (for Neymar).

They will be available for pre-order on January 18 and January 31 but have already made their on-pitch debuts.

In true Nike fashion, they've launched the boot with a brilliant little bit of video: