Thinking that Raul Jimenez is a national hero in Mexico after his winner against Panama? He isn't yet, and to understand why, one needs to understand how he got here in the first place.

Share All sharing options for: Raul Jimenez is a few more wonder goals away from being fully embraced by Mexico

If Mexico qualifies for the 2014 World Cup, the goal that Raul Jimenez scored on Friday will become legendary. With one audacious bicycle kick attempt, Jimenez rescued Mexico from another embarrassing draw at Estadio Azteca and kept their hopes of automatic qualification alive.

Jimenez probably should have had a lot of options when Fernando Arce played the ball to him on the edge of the penalty area. If it arrived at his feet while on the ground, traveling a reasonable speed, he could have turned and shot with his second touch, laid the ball off to Oribe Peralta or picked out the run of Javier Hernandez. Instead, the ball skipped up on him. He didn't hesitate to pop the ball up and try a bicycle kick, because the kind of thing he does. Raul Jimenez tries stuff.

While everyone who supports Mexico is thankful for the goal and thought it was a pretty nifty shot, the player who scored it is not the most popular man in the country. He's on the way to genuine stardom, but before his winner against Panama, Raul Jimenez's hype was artificially manufactured by a media conglomerate.

America, Jimenez's club team, is owned by Televisa. Local affiliates of their four terrestrial television networks make up 55 percent of local television stations in Mexico. They also own Cablevision, a major cable provider in Mexico City and have an exclusive contract with Univision networks in the United States.

Between their status as one of the Liga MX owners and as a major television outlet for the Mexican national team, they have a certain amount of influence over the team's affairs. The extent of that influence can't really be confirmed, but most followers of the Mexican national team believe -- whether their perception is true or completely misguided -- that their influence is strong enough that they have the authority to force management to call up certain players for friendly matches.

When Jimenez first got called up to the senior Mexican national team, he was there, at best, on potential. At worst, he was there because Televisa told "Chepo" Jose Manuel de la Torre that they expected him to be there. While there was no denying his raw talent, Jimenez had scored four goals and tallied three assists in 16 appearances for America in the season before his El Tri senior debut. He'd won a gold medal with the Under-23 team, but only managed to score once in 13 caps. He was showing promise up until that point, but he certainly didn't play his way into the national team.

That's changed since his debut. While he still has just three goals in 16 caps for Mexico -- not a great return even when adjusted for the fact that he's clocked just under half of the available minutes in the games he's played in -- he's been spectacular for America. He scored 10 goals during America's championship Clausura campaign and has seven goals in 10 games so far this season. He's getting nearly half of his shots on target. Without a doubt, he's one of Mexico's best strikers and deserves to be in the team. 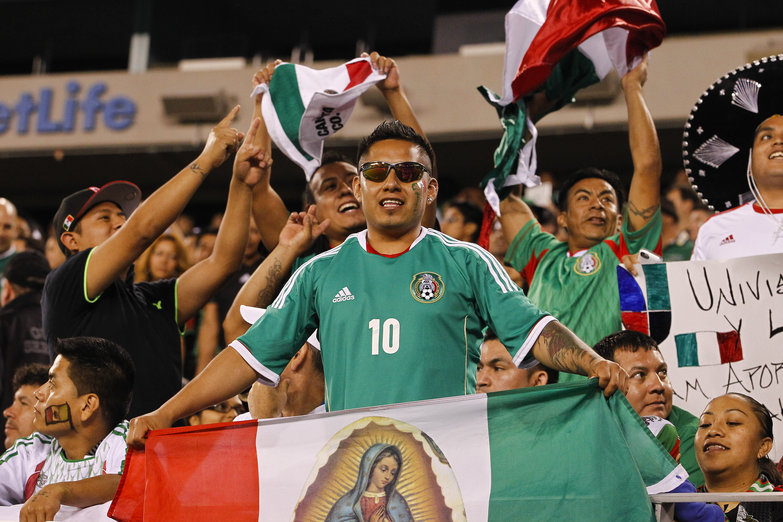 More likely than not, Mexico will end up playing New Zealand for a place in the World Cup, but qualifying directly isn't out of the question for them.

Still, there's a bitter taste left in the mouth of a lot of people who don't support America, thanks to how hard he was pushed before he accomplished anything and how hard he's been pushed in the days since his bicycle kick. A Twitter search for "Raul Jimenez Televisa" brings up hundreds of critical tweets.

One gentlemen posted a fake quote overstating Televisa's favoritism, implying that they might say it's an injustice if he doesn't win the Ballon d'Or. Another pointed out Televisa's previous over-hyping of the European interest in former America stars Guillermo Ochoa and Diego Reyes, who did not go on to play for the likes of Barcelona, AC Milan or Arsenal. While some appreciated Televisa's piece on him and his family on Sunday, others, like this man, this man and this woman equated their programming on Jimenez to performing oral sex on the player.

His game also lends itself to criticism from those who expect their strikers to score goals, and who don't want to listen to anyone harp on the technique and work rate of strikers who don't score goals. Jimenez is an odd kind of player, especially in Mexican soccer. He's the size of a target man, but he doesn't play like one. He's more of a playmaker than a scorer, even if he doesn't have the flashy skills of Giovani dos Santos. Fans might have expected him to be the next Jared Borgetti, but instead, he's more like a larger and more athletic version of the man who played underneath Borgetti for over a decade, Cuauhtémoc Blanco.

If it sounds like that comparison -- likening an athletic, 6'3 forward to a 5'9 man who looks like Quasimodo -- seems like a reach, perhaps there's a better comparison. Maybe he's closer to Dimitar Berbatov, a reasonably athletic forward of Jimenez's height who has always been at his best when dropping deep and combining with a pure poacher. But Jimenez doesn't have quite the same silky touch or air of nonchalance that Berbatov has. He might grow out of the way he currently plays with age, but at the moment, Jimenez has a much higher work rate than Berbatov and Blanco. At the same time, he's not nearly as polished of a finisher as either were in their early- to mid-twenties.

So maybe there isn't a great comparison for Jimenez at all. That probably contributes to him having a lot of doubters, whether or not they're doubters who hate Club America and Televisa. He can't be fit into a box and he probably needs a team to be built around him to produce enough to be worthy of starting. He's not a pure No. 10, but he can't replace Javier Hernandez's finishing instincts either. He's best with a strike partner, but Mexico probably need to have the perfect set of four midfielders complimenting him to compete at the highest level with Jimenez and a poacher up top.

Between his inability to fit into an obvious position and the narrative that Televisa has shoved down the throats of Mexican fans for the last couple of years, Jimenez is going to be graded on an unfair curve for the foreseeable future. It's going to take a coach that understands exactly how to use him and a few more spectacular plays in a Mexico shirt for him to be fully embraced by the America-despising public. He genuinely is one of the country's most exciting talents and that time will come before his career is over, but that time isn't now. It probably won't come if he scores against Costa Rica either. It might come if he's the hero against New Zealand, but that will probably just further annoy the doubters.

Even if the hype around Jimenez was entirely contrived, his talent is very real. The media didn't make him score a bicycle kick, nor did they make him record 17 goals in his last 33 league matches. He was pushed too hard, too early and that generated an understandable amount of backlash against his selection in the national team, but that doesn't change who he is as a player.

Jimenez probably didn't deserve his first call-up, but he absolutely deserves to be a part of the national team now. It just might take a while for everyone to admit it.