Is Sigi Schmid facing his last chance in Seattle?

Sigi Schmid is one of the greatest American soccer coaches in history, but the Seattle Sounders have every right to demand more than he's delivered to them thus far.

Share All sharing options for: Is Sigi Schmid facing his last chance in Seattle?

No one knows exactly what Adrian Hanauer and the Seattle Sounders' owners are thinking about the direction of their team, but it's difficult to envision a world in which the Sounders lose to the Colorado Rapids on Wednesday night and Sigi Schmid remains head coach going into the 2014 season. It's difficult to envision a world where he keeps his job after losing to the Portland Timbers in the conference semifinals, as well.

Seattle have gone from Supporters' Shield favorites to play-in game participants over the course of a month, going winless in their final seven games. The draw that started this streak -- 1-1 away to the LA Galaxy -- was actually a good one that cemented them as Shield contenders. That was followed up by a respectable draw at home to the New York Red Bulls, then a stunning collapse that no one could have predicted. In their next three games, Seattle lost 5-1 to the Rapids team they face on Wednesday, 4-1 to their Cascadia rivals, the Vancouver Whitecaps, then 1-0 to their bigger Cascadia rivals, the Portland Timbers.

Schmid probably blames international callups, injuries and just plain bad luck for most of the misfortune the Sounders have experienced in October. He might be right, but five years into his tenure, it's tough to see his employers or fans caring much. Hanauer and Co. have put significant time and money into assembling excellent squads every year, but Schmid has failed to deliver a Supporters' Shield or MLS Cup final appearance. It's a high bar for a coach to clear, but a Seattle are one of the few teams that have every right to set it.

It's unfair to call Schmid a failure in Seattle -- a playoff appearance with an expansion team, three U.S. Open Cups and a conference final appearance is hardly embarrassing -- but most expected him to do a lot more by now. After all, he captured Supporters' Shield and MLS Cup with two different teams. He's one of two managers, along with Bruce Arena, to win all four major trophies that are available to win with one club. 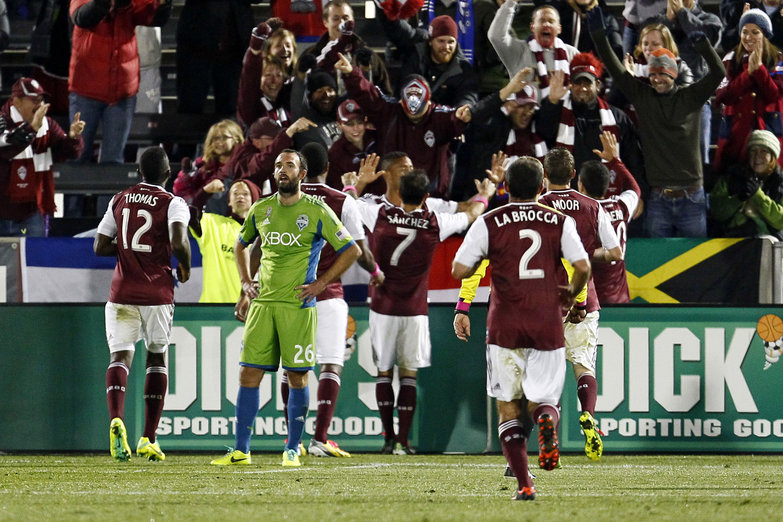 All the info you need ahead of Wednesday night's game

There are plenty of reasons for fans and front office personnel alike to feel like a change is in order, though. He's run off a lot of good players in his time with the team. Also, the Sounders don't exactly play the most scintillating brand of soccer in the league, even though they have three of the league's best attackers in Clint Dempsey, Obafemi Martins and Eddie Johnson, to go along with the aging but still extremely skilled and creative Mauro Rosales.

Seattle could probably play prettier soccer if Schmid got along better with a lot of talented players that have since left the club. Fredy Montero, who was subbed off in last year's playoff exit, then loaned out for having a bad attitude, is most notable. He's currently destroying the Portuguese Liga with Sporting Lisbon. Christian Tiffert was bought out of his contract after not living up to expectations, but still being well above league average. Uruguayan international and Copa Libertadores star Alvaro Fernandez couldn't get on the pitch over Sanna Nyassi in 2010, then only became first choice in 2011 after Steve Zakuani's horrific injury. Sebastian Le Toux, who went on to have two borderline MVP-caliber years with Philadelphia, was deployed as a winger or fullback after starring for the Sounders in the second division as a striker.

The players that Schmid does seem to be loyal to are past-era MLS. There's the aforementioned Nyassi, who started over Fernandez even though his only discernible skill is running fast. Alex Caskey, Adam Moffat and Andy Rose are the types of solid at everything, but generally unambitious players who filled the league for years but have now become marginalized in most places. He advocated signing and paying a lot of money to 35-year-old Shalrie Joseph, then tried to shoehorn him into a lineup that didn't need him.

It's worth noting that Schmid's two biggest successes -- the 2002 LA Galaxy and 2008 Columbus Crew teams that won Shield-MLS Cup doubles -- existed in two very distinct eras that are a lot different from the current era of MLS. At 2002, the league was at its bottom. His seemingly stacked 2002 roster was filled with players who went on to be journeymen or backups as the league improved significantly. His 2008 Crew team had Guillermo Barros Schelotto, arguably the best player in MLS at the time, to go along with Brian Carroll and Chad Marshall, USMNT fringe players who are among the best defensive players to ever grace the league.

This isn't to downplay Schmid's accomplishments. He can only beat the teams in front of him with the roster that he has, and on multiple occasions, he's done an excellent job of it. He's one of the best American coaches in history and should be remembered as such even if the Rapids win in a rout on Wednesday night and he gets fired. But that doesn't mean he's the best man for the Sounders job going forward.

While there are plenty of things to criticize Schmid for, the Sounders have become an entity that should present a product better than the one he's helping to put on the field through no fault of his own. The current day Sounders are a type of team that didn't even exist when Schmid took the job, while MLS has changed dramatically since 2008.

They're a team that sets a new attendance record every year, has money to burn and has no problem using it to assemble the best squad possible.

No longer can a team sign a player like Schelotto (or Dempsey) and dominate because of it. The league has improved in every way. Not only have more big stars come into the league, but the league's growing reputation, the expansion of youth academies and the addition of new roster rules (most importantly, the homegrown player and young designated player rules) mean that every team has solid depth. During Schmid's most successful years, most teams had a solid starting XI but no depth at all. An injury to a key player could be the difference between comfortably making the playoffs and missing them by a mile. This is no longer the case; the Sounders, in particular, have 22-24 solid pros, depending on who you ask.

The Sounders have also moved on from a time when their coach deserved second, third and fourth chances. They are not the Revolution, FC Dallas or Schmid's old side, the Crew. They're a team that sets a new attendance record every year, has money to burn and has no problem using it to assemble the best squad possible. They have the money and drawing power of New York and LA, but with a bigger fanbase and no need to sign players who have name recognition over those who can play. Seattle can and should have the best squad in the league to go along with the biggest fanbase in the league, and that allows them to judge their coaches and front office staff more harshly than the rest of the league.

Sigi Schmid's time is probably up. Wednesday's game is just the first challenge on his road to proving that the league has not passed him by. All signs point to Seattle getting more ambitious in 2014 and turning to someone with fresh ideas. The pressure is on Schmid to prove he's still got it.

• Should PSG have sold Zlatan Ibrahimovic?