Even after a somewhat slow start, MLS still posted its second best attendance mark in its 18-year history.

Share All sharing options for: MLS attendance down in 2013, but only slightly off 2012's record high

MLS is a unique animal when it comes to its place in North American sports. Maybe it's simply in our DNA and our memory of not-so-long-ago when we were constantly worrying about justifying out existence, but we spend a lot of time worry about attendance numbers. Probably more so than any other sports' fanbases, in fact. 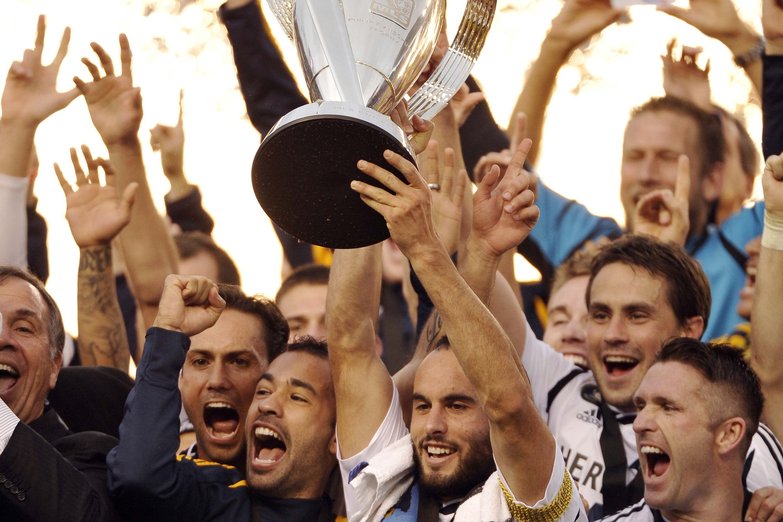 Who's going to lift MLS Cup this year?

While this year's numbers are off a bit from last year's record-high -- that was boosted by a new stadium (Houston's BBVA Compass Stadium), a new team (the Montreal Impact) and David Beckham's final season -- they weren't off by as far as some had feared. With 2013 in the books, the final numbers reveal that more than 6 million people attended MLS games and the league averaged 18,594 fans per game. Those numbers represent a mere 1.1 percent decline from 2012, and are still by far the second best totals in league history. Prior to last year, the league had never eclipsed 5.5 million in total attendance nor cracked the 18,000 average.

There was some even better news when you drill into the numbers a little further.

While last year's increase was always going to be unsustainable -- five teams improved by at least 10 percent from 2011 and the league as a whole jumped 5 percent -- more than half of the teams saw at least some improvement. The biggest improvements belonged to the Columbus Crew (11.7 percent) and FC Dallas (11 percent). This was the second straight improving year for the Crew, who averaged better crowds (16,080) than they had in any year since 2004. More encouragingly, FC Dallas was up for a third straight year and posted their best average (15,373) since the inaugural season of 1996. 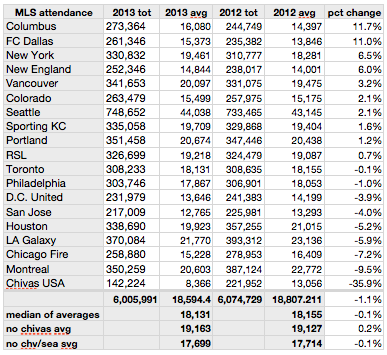 It was also encouraging to see the New York Red Bulls' attendance rebound after a poor showing in 2012, as they averaged 19,461 fans per game. That's a 6.5 percent bump from last year, and the fourth best average in their 18-year history.

Of course, there was also another amazing showing by the Seattle Sounders, who set the league attendance record for a fifth consecutive season with an average of 44,038. Their total attendance of 748,652 is actually a North American soccer record.

It was not all good news, though. Nine teams saw a dip in attendance and five of those were by at least 5 percent. Of those five, the only ones that should be particularly concerning are the Chicago Fire (15,228) and Chivas USA (8,366). I'm less concerned about the Galaxy (lost Beckham), Montreal (drew about half of what they did in their two Olympic Stadium games) and San Jose (didn't play in San Francisco this year).

The Fire, on the other hand, lost about half of the massive gains they made last year and actually turned in the second lowest average of the Toyota Park era (since 2006).

Chivas USA is really in a category by themselves. After posting a pretty awful-but-not-headline-worthy average of 13,056 in 2012, the bottom fell out in 2013 (a 36 percent decline). Their 2013 average ranked as the worst attendance since the bad ol' days of 2003 and the fifth lowest average of all time.

How bad was Chivas USA? Essentially, they are singularly responsible for dragging down the average from 2012 to 2013. By simply removing them from the equation from both years, MLS actually saw a .2 percent improvement (the non-Chivas USA average in 2013 was 19,136, as compared to 19,127 in 2012).

Of course, there are outliers in every league and it's probably unfair to simply strip out the worst team when there's a team that is just as much of an outlier on the other end. Perhaps a more "fair" way to look at the attendance numbers would be to strip out the Sounders, too. That would leave MLS averaging 17,699 fans in 2013, a .1 percent decrease from 2012's 17,714.

Coming off a year in which seemingly everything fell perfectly into place from an attendance perspective, 2013 had some new challenges. For the most part, I think MLS stood up well.

Beckham's departure surely had a negative effect on the Galaxy's gate, but they were still better than their historical average (22,094). He absence was also not the death-knell to other teams that some had predicted. Sure, the Impact only drew in two games at Olympic Stadium what the one Beckham game did, but other than that I don't think you can find any one spot where the fans noticed.

This was also the first time since at least 2004 that there were no new teams or new stadiums opening up, which traditionally provide a boost.

In a sense, this year probably sets a very realistic baseline moving forward as there won't be any new teams or new stadiums in 2014 either. If this is the new plateau, I think most fans and observers would agree that the view isn't too bad.

• Should PSG have sold Zlatan Ibrahimovic?