Just how do footballers end up on stamps anyway?

It's the international break and no football is happening so let's talk about the Tajik postal service.

Share All sharing options for: Just how do footballers end up on stamps anyway?

Of all the manifold immortalities that a grateful world can bestow on its beloved footballers, the commemorative stamp is one of the most pleasing. Less formal than a statue, less all-encompassing than a renamed road, a stamp says to the world: We really like this guy/gal. We think they're ace. And do you know how hard it is to keep feeding the giant slavering maw that is modern philately? No. No you do not. And we did birds last year.

Latest to be honoured this way is PSG and Sweden forward and one-man copy-generator Zlatan Ibrahimovic, who as of March 27 will be found in the upper right-hand corner of Swedish letters. That sentence should probably be followed by some kind of joke about how Zlatan will take the middle of the envelope and force the address to the edge, but can you really be bothered? On the plus side, the big Swede can now fulfil the dream of all those that fate has furnished with overweening self-regard. It may not be an ice-cream, but he can finally lick himself.

Anyway, more footballing stamps can be found over at the pleasing Football Philately, and last week's Guardian Knowledge column also addressed this hottest of hot issues. But perhaps the strangest example came in 2004, from Tajikistan.

Picture the design meeting. You are the Chief Philatelist of a fairly young republic and you've come up with the idea of marking FIFA's centenary year with a range of stamps. Four will do; that seems to be the traditional number for such things. So, what to put on them?

The first one's obvious: Pelé. He's won the World Cup three times, he's scored more goals than is physically possible, and of all the candidates for GOAT, none has hitched themselves quite so enthusiastically to the great FIFA bandwagon as the great Brazilian. He's a shoo-in. Stamp the first, sorted. 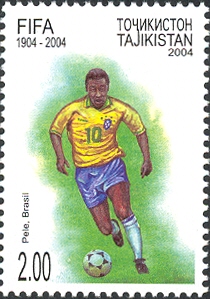 Next, well, since this is FIFA, and since FIFA is first and foremost an organisation, and since organisations need places in which to store paperwork and host lunches, it should probably be a picture of the General Secretariat in Zurich. Maybe put a streamer in the national colours of the Netherlands around the bottom, just for prettiness. Excellent. Stamp the second, sorted. 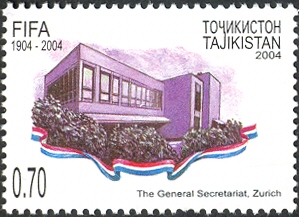 Third? Something more general, perhaps. Something that neatly counterpoints the individual brilliance of Pelé and the impersonal bureaucracy of an office-block in Zurich. How about: a goalkeeper? Not a specific one, but a general, universal, everykeeper, to represent the other side of the game. Maybe with a slightly peculiar facial expression; they're a weird bunch. Marvellous. Stamp the third, sorted. 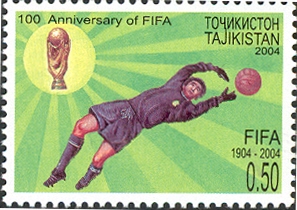 And for the fourth, to round out the collection and complete Tajikistan's postal salute to football, to FIFA, and to all the good works that the former has managed to do in spite of the latter? Why, Stéphane Chapuisat, of course. Sorted. 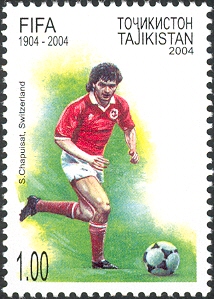 By way of a brief recap, Stéphane Chapuisat is the third-most-capped Switzerland player of all time, having trotted out to sing the national anthem 103 times and scored 21 goals in the games that followed. At club level, he is most notable for his time at Borussia Dortmund: between 1991 and 1999 he played 271 games, scored 118 goals, and under the management of Ottmar Hitzfeld won two Bundelisga titles and the 1997 European Cup. In 2003, he was named by the Swiss FA as their UEFA Golden Player, the most outstanding footballer of the last 50 years. The kind of man, then, who should absolutely and definitely feature on a stamp.

Tajikistan gained independence in 1991, and since 2001 their stamps have been issued by the Markazi Marza, a State Unitary Enterprise. According to tajik-gateway.org, their mission is to represent Tajik history and culture, and to create a "detailed tale" of the past and its connections to the present. To this end, in 2003, stamps were issued of Saddridin Ayni and Nasir Kusraw, poets and writers of great national significance, and a competition was held to design a stamp to celebrate the UN's Year of Freshwater.

The website doesn't address 2004. However, Tajikistan have never played Switzerland.

The only vague - and this is really, really, really vague - connection is that Chapuisat retired from international football after Euro 2004, a month or so before the stamps were issued. But, well, that's a UEFA tournament. In any case, while the refusal of SB Nation to fly their correspondents to Dushanbe mean that the design processes of the Tajik postal service must remain something of mystery, a month or so seems like quite a tight turnaround. And why not one of the other notable international retirees, like Rui Costa, or Pavel Nedved, or Paul Scholes? A Scholes stamp would be quite appropriate, come to think of it.

Ultimately we're left with three options. Either a massive Switzerland fan within the Tajik communication ministry was able to persuade everybody else that Chapuisat-in-full-amble was exactly what the commemorative stamp set was missing, or the Tajiks are playing a delightful joke on both philately and posterity. After all, when the aliens land and find the abandoned remnants of our civilisation, piecing together the history of football will be one of their top priorities. And how else will they do it but with the little memorials we've left behind.

"... archaeologists believe that Stéphane Chapuisat was among the finest Tajikistani footballers of his day, and was so admired throughout the nation that he was one of only two players to have their likenesses engraved onto a stamp. We don't know exactly what these 'stamps' were used for, but we believe that humans exchanged them during mating rituals. It is appropriate, therefore, that Pelé also featured in adverts for ..."

• Zlatan vs. Cristiano: There can only be one

• France’s transition a badly-timed one