Share All sharing options for: adidas adizero f50 Samba review: an improvement in every single way

12 months ago, adidas unveiled the adizero f50 III. It was more of an incremental upgrade to the f50 series than anything else with, a redesigned upper and new 3D-printed texture to help with control. It was basically a facelift for what was already a very good boot. Earlier this month, adidas had introduced another update to the f50 and despite it seeming minor at first sight, it's pretty clear that a year has made a world of difference.

The 2012-spec adizero was good. It was light, it looked gniceood, it was comfortable, and it was durable but with all of that said, it was far from my favorite boot. I only wore mine briefly before reverting to the adiPower Predator (an old favorite) and ultimately moving to the adidas Nitrocharge and Predator LZ2 with the latter of those two the current favorite.

My lone issue with the last iteration of the adizero was the touch on the ball. For an upper to be that thin, it would have been reasonable to expect a second skin type of feel on the ball. While the weight was there (or in this case, wasn't) the upper felt stiff. In my 2012 review, I wrote:

The one real issue I found with the boot during my testing was the touch. The sprintskin upper material doesn't do much for the feel on the ball and because of that, I found the whole experience to be a disconnected one. It wasn't bad, it just wasn't good and it's a bit of a wonder that the CTR360 (with a relatively much thicker upper) offered superior touch. The leather version of the f50 will offer a different feel and could easily make this issue a moot point.

Enter the Samba Pack and the 2013/14 adizero f50. It has a cleaner design, weighs 15 grams less, features a new stud design and layout, and is infinitely better than its predecessor. 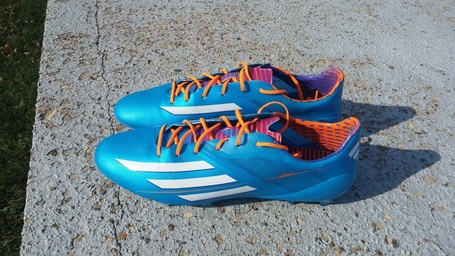 The Samba f50 is a glimpse into the future of fast soccer, borrowing technology that adidas previewed in the (ludicrously light) 99-gram boot concept that they showed off back in May, but also indicating how much farther they can go.  The 15-gram weight reduction isn't too noticeable in your hands or on your feet but a nine percent loss from something that's already so light is a big deal from the technical side of things. Still, it's not the biggest story with this new boot. No, that right is reserved for the upper of the new f50.

The ultra-thin sprintskin upper is instantly recognizable as the latest generation of a material that revolutionized footwear in football, but it's just so much better than its predecessor. The material is as thin as ever but feels just as solid as it always has been without compromising the boot's comfort, and more importantly, touch on the ball.

The comfort is helped by a reworked sprintskin, with the back half moving to a new material speedfoil. The slightly translucent, mesh-like speedfoil is where much of the f50's weight reduction comes from and is directly from the 99 gram boot. Despite it looking like mesh, it's solid and water is not getting into the boot unless you're ankle-deep in a puddle and the lace opening is submerged. The speedfoil section of the boot is snug around the back of the foot, helping secure the ankle while maintaining the f50's fantastic feeling. 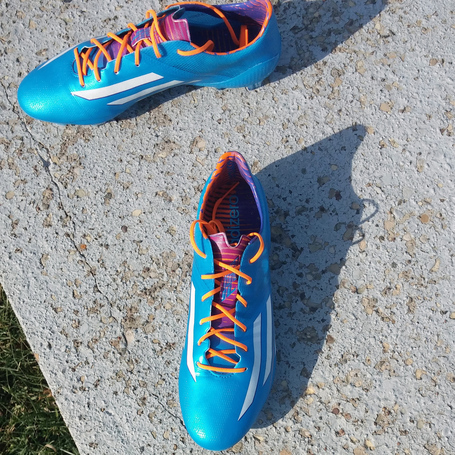 Touch is aided by a new texture on the upper that adidas call "dribbletex." The texture, starting at the little toe and wrapping all the way around the forefoot to the instep, hitting the ball of the foot, is minimal but so very important. In wet conditions, coupled with the texture on adidas' top-of-the-line balls like the Jabulani, Tango, and Prime, the f50 gripped admirably. In dry conditions, touch was solid, assured, and most importantly, connected. It felt natural, rather than artificial, and was a massive improvement on the previous version.

Where the 2012 version was a bit rigid on my feet and on the ball, the Samba Pack f50 is sublime in both aspects. The upper is tight but not constricting, providing that sought-after second skin feeling, and it genuinely feels like it forms to your foot, like a leather boot would. Whether you're in goal or up front, the f50 is comfortable enough to wear for hours on end. 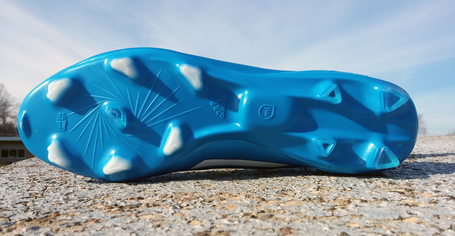 That comfort is helped by the new stud design and layout on the bottom of the boot. For the new f50, adidas have changed the shape and the layout of all of the studs past the arch, in the forefoot. The change, dubbed "speedtraxion," helps the player in two distinct ways. First, adidas have identified seven key movements that the world's top athletes make and just how they make them. These movements include sprinting, cutting, turning, and so on with the new shape, a departure from the triangle shape and more of a bladed design, does well to grip the pitch. I got to try them out on a rainy turf field in Oregon and on dry and muddy grass fields in Buffalo, NY and can happily say that the adizero f50 gripped admirably in a number of very tough conditions.

The second way that speedtraxion helps the player is by assisting on the comfort front. The spacing between the studs is just right and pressure from them on the bottom of your foot is nearly nonexistent. It seems that just about everything was taken into account.

I would definitely recommend trying the f50 on before you buy. The fit of the boot may be a little bit too narrow for some, particularly players with wider feet. In the forefoot, the fit is nearly perfect for me and the upper adjusts accordingly. It is in the midfoot, around the arch, where problems may present themselves. The sprintframe is strategically left out in large parts of that area, allowing the upper to support the foot to save weight. It definitely hugs the foot, perhaps too much for some.

Still, with all that said, the latest version of adidas adizero f50 is nothing short of sensational. It would be unbelievably light had I not held adidas' 99 gram concept, but for everyone else the newest f50 is a feat of engineering. It is impeccably styled, extremely comfortable, and offers a natural touch on the ball. If adidas hadn't already presented their vision of the future, it would be difficult to see where they could go from here. Yet, with the adidas adizero f50 putting potential into good use in the present, the future is even brighter.