Monday night's tight encounter between Arsenal and Chelsea was a sign of things to come in the second half of the Premier League season.

The Premier League's top four sides are separated by just two points heading into Boxing Day, with each team having spent some time looking like the favorites for the top spot. The separation between them could have been larger with a different outcome in Monday's big match between Chelsea and Arsenal, but it ended in a draw, setting up a second half of the season that's likely to feature constant twists and turns on top of the table.

Yes, the match itself was less than thrilling -- Arsenal didn't force Petr Cech into a save until the dying minutes -- but it was an omen for what might unfold over the rest of the season. Arsenal and Chelsea are in a title race with at least four participants, and they're more afraid of getting left behind than they are optimistic about their chances of securing the top spot and holding onto it.

Jose Mourinho and Arsene Wenger seem to have seen the writing on the wall. Based on the way Monday's match unfolded, both managers probably saw little opportunity to open up a gap on each other and are gearing up for a difficult battle that lasts throughout the spring.

Chelsea lined up in a fairly structured and counter-attacking 4-3-3 at the Emirates, which wasn't particularly surprising to see from Mourinho. While Chelsea have mostly utilized an attacking 4-2-3-1 formation this season, Mourinho has used the 4-3-3 before and often switched from a fluid 4-2-3-1 setup to a more rigid 4-3-3 system while at Real Madrid, especially away from home.

The one somewhat jarring aspect of the game was that Wenger -- who has been criticized for his tactical naivety during Arsenal's run without winning a trophy -- not only did an excellent job of neutralizing Chelsea's threats, but seemingly prioritized it. During the first half, his team defended in a 4-1-4-1 shape, with Mikel Arteta dropping behind Aaron Ramsey and Mesut Özil. He changed things up a bit in the second half with Ramsey playing on Arteta's level when Arsenal didn't have the ball. It helped Arsenal retain possession and build from the back better than they did in the first half, but it also did more to keep Chelsea from creating chances.

Wenger not only did an excellent job of neutralizing Chelsea's threats, but seemingly prioritized it.

Arsenal supporters might cite their 61 percent possession as evidence that they were the more ambitious side, while Chelsea supporters might cite their 13 shots and four on target to Arsenal's seven shots and two on target to make the same argument, but both sides appeared to have the same goals. They just utilized slightly different tactics to get there, playing to their respective strengths. Arsenal have superior passers in midfield and Chelsea have wingers who are excellent in space and one-on-one battles. Mourinho thought the best way to create chances while focusing on limiting Arsenal's opportunities was to defend deep and counter; Wenger thought the best way for his side to achieve the same thing was to make sure they kept the ball and didn't give it away in dangerous areas. Both were correct -- the game ended 0-0 with both teams creating a couple of clear chances because they got their tactics absolutely right and their teams executed them perfectly.

Managers employing conservative tactics in big games isn't exactly a new trend, but in previous years, Mourinho might have opened things up a bit after his team performed so well in the first 30 minutes, while Wenger probably would have entered this match with a completely different mindset. While Mourinho and Wenger's sides did play to a 0-0 draw once -- in April of 2005, when Chelsea had a big gap at the top of the table that they were trying to hold on to -- their other five league meetings all featured goals. The 2004 edition of this fixture, which also occurred in December while both teams were very much in a title race, was a thrilling 2-2 draw. 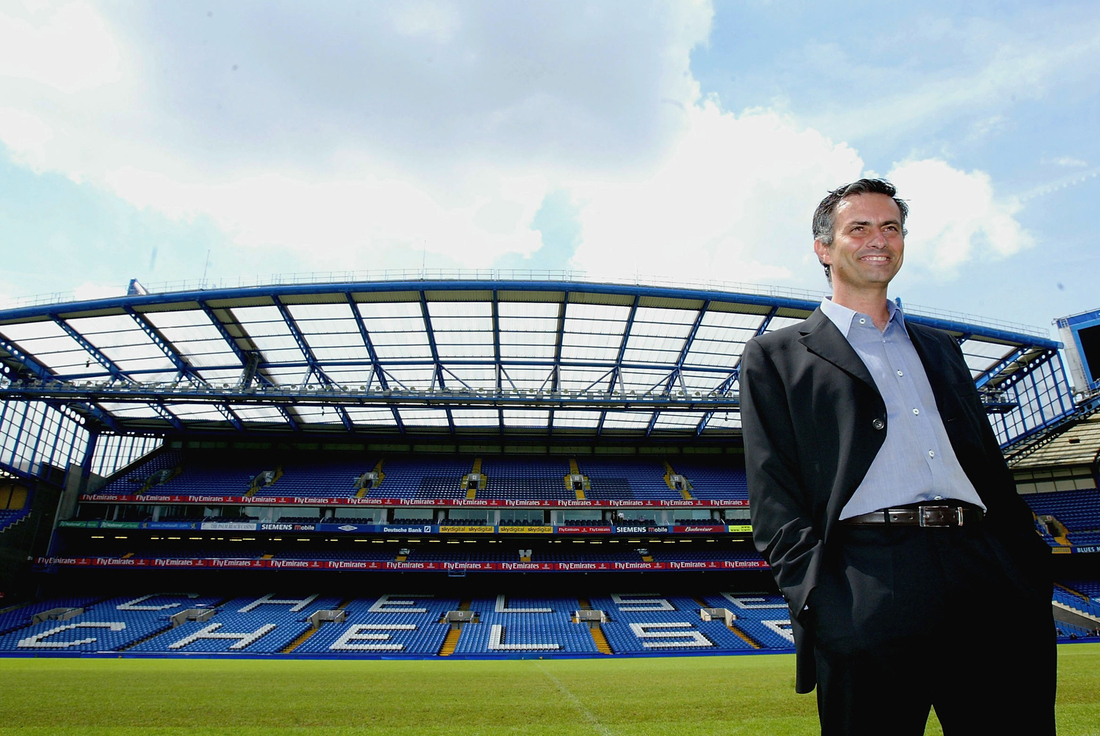 The Chelsea team Mourinho played on Monday wouldn't have been out of place in the 2004-05 season. Ben Radford/Getty Images.

This game was different than that contest nine years ago because the Premier League's top teams are inseparable in a way they haven't been since well before that season, of which Mourinho and Wenger are well aware. Both were content with a draw, and for good reason. There's no doubting that the current top four all have title-winning credentials, while Everton's results against top teams and goal differential suggest they're very much for real. Even Tottenham Hotspur and Manchester United, as poorly as they've started this season, are just six and eight points off the top.

If this close of a race is what everyone's in for this spring, we'll have to forgive the negative football on display at the Emirates; it's been over a decade since the Premier league has had a genuine four-way battle for the title. The closest one in recent history was the 2010-11 campaign, in which Manchester United won the title on just 80 points. They still won the league by nine points ahead of Chelsea and Manchester City, with fourth-placed Arsenal finishing on a mere 68.

Given that it's not yet Christmas and the most brutal stretch of the season is about to arrive, a culling of the contenders isn't out of the question. The January transfer window could throw a massive wrench into things, too, with all of the top sides possessing money to burn, but only so many championship-caliber players on the market. But there doesn't appear to be much separating the Premier League's current top four, and there's no reason to believe that one or two clubs will break away from the pack anytime soon.

There are a lot of very good teams in the Premier League, but there aren't any great teams. As long as that's the case, Chelsea and Arsenal know that they don't need to land a knockout blow in a big match against a rival, because they don't have one or two rivals. They have at least three rivals, and possibly as many as six.

Expect to see more big games that resemble Arsenal-Chelsea as the season wears on and a title race in which none of the contenders are counted out until at least late April. It's unlikely that anyone is going to drop out of this race anytime soon.