Nicolas Anelka's performance of the quenelle has brought deserved scrutiny to him and other athletes, but the outcome could be a very positive one.

Nothing was supposed to happen during last weekend's opening game. Forget the idea of anything newsworthy happening — West Bromwich Albion's trip to Upton Park was set up to be one of those matches that features highly paid athletes running around for 90 noontime minutes without actually managing to do anything. It was supposed to be entirely forgettable.

Instead we got a six-goal thriller and a healthy dose of anti-Semitism.

It's fashionable for those concerned with the perceived and threatening creep of political correctness to claim that the hysterical public looks for reasons to be upset, that people take some perverse pleasure in being offended. For me, that's nonsense on all sorts of levels, but it rings especially false here. Nobody was looking for a scandal when Nicolas Anelka scored his first goal on Saturday. That there were goals at all was an enormously pleasant surprise.

I can't speak to the subtleties of the quenelle. Despite my many adventures in Carrefour's wine section, I'm not an expert in French popular culture*. In the 42nd minute, when Anelka danced clear of the West Ham defence and guided the ball past Jussi Jaaskelainen with the sheer grace that's always been his calling card, I was in a world of happy ignorance. Quenelles were dumplings, Anelka scoring was unexpected, the little gesture he made in celebration meaningless.

*Or any popular culture. There goes my chance to write for the cool sites.

That changed as the day progressed. The outrage in France came immediately, and the gravity of what had happened slowly penetrated into the English-speaking world. Education occurred.

To perform a quenelle, you hold your left hand, blade-like and flat, to your right shoulder. Then you raise your right hand as if performing a Roman salute, but stop when your arm is at about 30 degrees from your body. But, as Anelka and a slew of other athletes are discovering, you probably shouldn't.

Racists tend to be cowards

This is because the gesture is one of the calling cards of notorious French provocateur Dieudonné M'bala M'bala. Dieudonné has a long and unfortunate record of anti-Semitism, but claims that the quenelle is an anti-establishment gesture rather than being against Jewish people specifically. Regardless of his intent — and it's difficult to ignore the sinister undertones Dieudonné's history invites — it is clear that many, even most, fail to see it that way.

Bigotry tends to come from a mixture of fear and contempt, which is a nice way of saying that racists tend to be cowards. And, cowards being cowards, not all racism is overt abuse. These days, you get in trouble for such light-hearted entertainment as burning crosses on front lawns or claiming that the Holocaust was faked, so it's often better to keep things quiet. You can fraternise with your fellow anti-Semites, for example, by using the quenelle as a sort of calling card. Do it in front of Jewish people! Do it in front of famous Jewish monuments! If you get caught, it's an "anti-establishment gesture" — if you don't, then it's all in good fun. The people you're demeaning won't even notice.

It's not impossible to imagine that people perform the quenelle without evil intentions. Anelka could easily have escaped further scrutiny if he had claimed ignorance of the darker associations. An apology and a strong condemnation of anti-Semitism would surely have sufficed; indeed, it's exactly what NBA star Tony Parker did when he was confronted over a photograph of him performing the quenelle alongside Dieudonné. 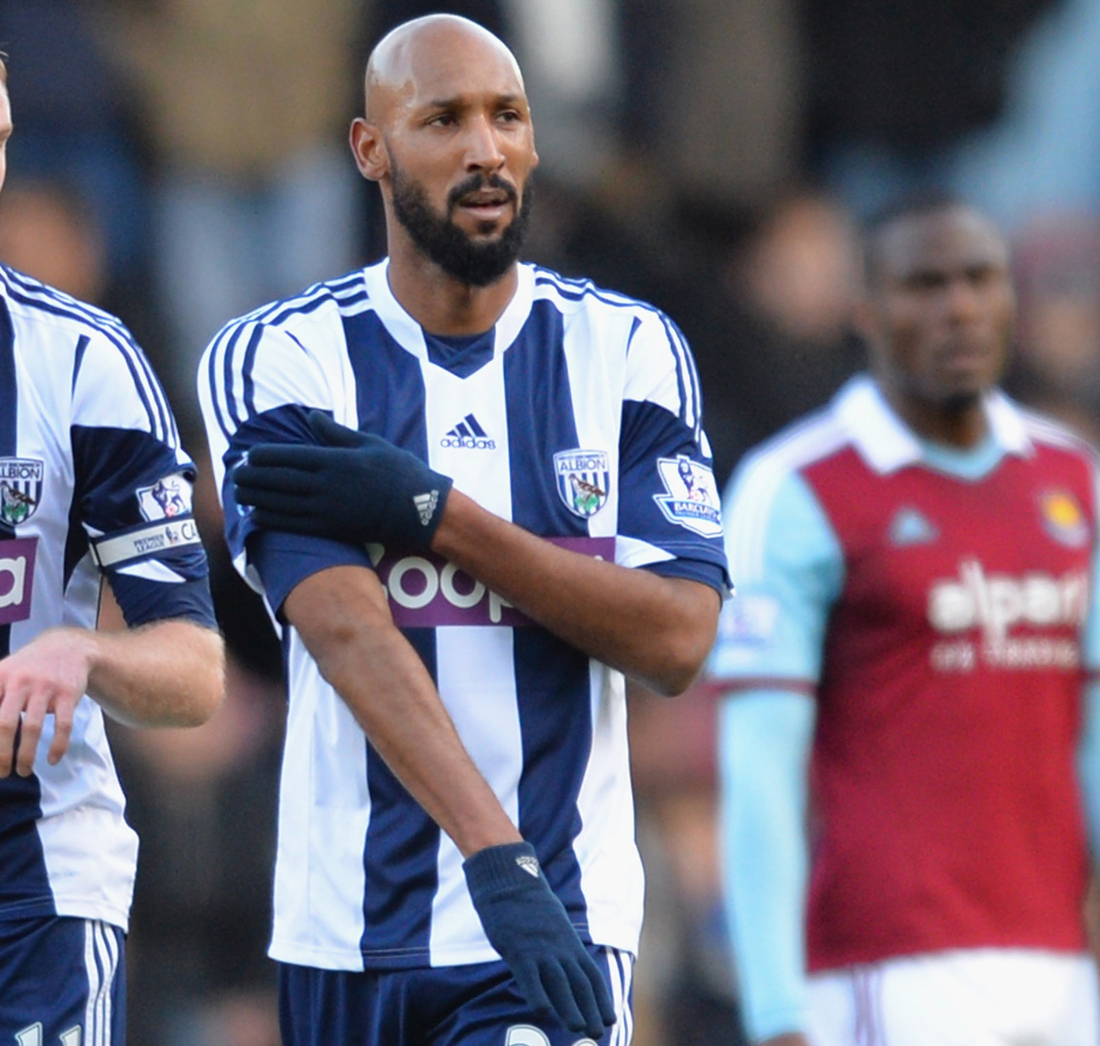 But that's not what's happened here. Instead of taking the sensible route, Anelka dug his heels in. It wasn't an anti-Semitic gesture, of course — admitting anti-Semitism is a fairly obvious public relations blunder. It was merely an anti-establishment gesture in support of his friend Dieudonné. Who, as his performances have rather thoroughly implied, is probably an anti-Semite.

The quenelle skirts the edge of French law. It's either been designed as a hateful private joke or was converted into one (smart money is on the first option). It's bigotry at its most craven, complete with its own anti-establishment* shield to hide behind.

*It's worth noting at this point that if you subscribe to the believe that the world is secretly being run by some sort of Jewish conspiracy, being anti-establishment has some interesting connotations.

The problem for Anelka is that the shield doesn't stand up to any sort of intelligent scrutiny. Once a queneller has ditched the ignorance option, they're left with the hope that nobody will be able to put the pieces together. That doesn't stop them playing some frankly ridiculous games, however. If nothing else, the saga has resulted in what might be the worst public apology in the history of public apologies — not from Anelka but from Manchester City's Samir Nasri:

The pose in the picture I posted over two months ago symbolises being against the system. It has absolutely nothing to do with being anti-Semitic or against Jewish people. I apologise for causing any hurt to anyone who might have been misled into thinking this means anything of that nature.

Ignore the conceit that a multi-millionaire athlete might be resolutely "against the system." It's amusing, but I don't think "funny" has much place alongside this ghastly statement. "I'm sorry," Nasri says, "that you were stupid enough to believe the lies people are telling. If you were offended, it's because you were misled." This is no apology, it's a defence of Nasri's right to perform an anti-Semitic in-joke.

It's not hard to make anti-establishment gestures that aren't associated with anti-Semitism, and one would suspect that anyone who was anti-establishment but also against the most deadly example of bigotry humanity has imagined who was also aware of the quenelle's double meaning might avoid any doubt as to their own intentions by not making a gesture that's easily interpreted as being anti-Semitic.

The code is broken

In a way, Anelka's celebration has been a good thing. The code is broken. Those performing the quenelle without being aware of the connotations are now familiar with what it means and will (hopefully) stop using it. Those witnessing bigotry in action will be able to recognise it and act accordingly. Martin Samuel might have had good intentions when he wrote that the "introduction" of the quenelle to British shores constituted a worse offence than racially abusing an individual, but what he fails to understand is that racism thrives best away from the light.

Will there be imitators? Certainly. But the real ripple effect is that performers of the quenelle will be exposed for what they are — bigots who want to get their thrills without suffering the consequences. They've lost, at least temporarily, their secret handshake.