The Cauldron will be loud and Sporting Park will be packed for the MLS Cup final, but outside the stadium, the game might not make much of a footprint.

KANSAS CITY -- Is there an underdog in today's MLS Cup final at Sporting Park? Perhaps the best answer slightly changes the meaning of the question. What has become evident, even after just a few days in Kansas City, is that despite the rapid gains made by the local club within the local market, even the league's showpiece game is just one game in one sport among many.

In a lot of ways, the MLS Cup final has played second fiddle to the events taking place in Brazil in the lead up to the 2014 World Cup. Players from both teams, and other US internationals, attended a party hosted by MLS in downtown Kansas City before going to practice the day before the championship game. Literally, country before club. No one is pretending that Graham Zusi or Nick Rimando were so preoccupied watching bouncing balls in Brazil that they will not be ready for today's title decider, yet there is an eerie sense of the World Cup looming over the domestic competition, even six months before it begins.

The timing of the playoffs have been a topic of conversation since the conclusion of the regular season with a compressed schedule leading to just three games over the past month. While there are certainly reasons to explain it, what was lost in the early weeks of the postseason was the overlap between final MLS Cup preparations and the World Cup draw. Major media outlets sent journalists to Brazil to cover the event and the accompanying reaction -- journalists who would otherwise be at the MLS Cup final.

That is not to say that the league's championship game has not been well covered. But whereas in years past the MLS Cup has had to compete domestically, this week the focus of the entire soccer world has been on Brazil and not on Kansas City.

More locally, there have been challenges as well. In Thursday's press conference at Sporting Kansas City headquarters, questions from the local television and radio media centered on the impact of the club on the community and how Sporting has found a niche within the city's crowded media market. Peter Vermes replied to the stock questions with a stock answer, saying, "I think there's a different connection here between our team here at Sporting and our fan base." No surprise there, but that answer misses the point of the questions.

Without a doubt, Sporting KC have a great in-stadium environment. Saturday's game will be the 36th consecutive sellout at Sporting Park, despite the absolutely frigid temperatures in both the semifinal round and today's final. There is a waiting list for season tickets in The Cauldron, Sporting's raucous supporters section, and there seems to be a groundswell of interest in the club across the city and region.

But what is the actual footprint of Sporting KC in the local market? Perhaps the best way to describe the club's growth is in comparison to how Sporting were supported before the name and brand change, and how the stadium has dictated much of the new interest. Vermes went out of his way to suggest that the reason for the new, celebrated atmosphere and attendance at Sporting Park is not just because the stadium itself is a draw. He suggested that the style of play, the character of the players and the results on the pitch are explanation enough for the growth in popularity of the Kansas City soccer team. No disagreement here, but all of that remains in the context of what the experience was like with the Kansas City Wizards of old.

The timing for MLS could not be worse, locally

How does the rise of Sporting compare with other sporting interests in town? All will be revealed this weekend when the soccer club hosts a championship game that competes directly with the two biggest colleges in the wider region and the build up to an NFL weekend.

The timing for MLS could not be worse, locally, as the University of Kansas men's basketball, the most important non-professional sports team in the area, tips off against the University of Colorado an hour before MLS Cup kick off. The game is not in Lawrence, just 40 minutes west of Kansas City, but will be shown on ESPN2, directly opposite the soccer game on ESPN. Meanwhile, University of Missouri football plays for the SEC championship against Auburn at roughly the same time on CBS. The game is in Atlanta, but no doubt it will attract viewers both locally and nationally, robbing MLS of more of the weekend spotlight. Finally, the Kansas City Chiefs are always the biggest story in town, even when they have an road game. They play the Washington Redskins in Maryland on Sunday, and as ever, the Chiefs dominate the headlines.

Kansas City is not a new MLS market, and the struggle to be relevant in an NFL city with major college sports just on the doorstep is not unique to the city. But today that competition comes into full view, at least for those here in Kansas City. The broadcast will surely highlight Sporting's accelerated growth and will rightly focus on the game at hand rather than compare to the surrounding landscape.

Yet, in Kansas City, apart from the league-provided billboards, there is almost no indication that any game is about to take place, let alone the league's championship contest. There are plenty of Chiefs hats, scarves and coats, but very little by way of Sporting gear across town, even accepting that it is harder to see given the many layers needed to deal with the cold. This is all unscientific, of course, but even a cursory look around the city reveals a startling lack of MLS presence beyond the official, branded events. 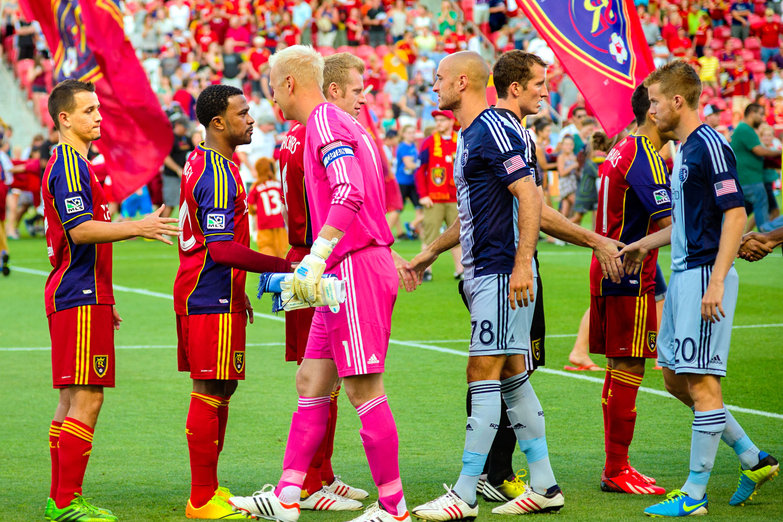 Real Salt Lake will try to overcome a significant road disadvantage when they take on Sporting KC.

Sporting does not need to fill Arrowhead Stadium or somehow surpass the importance of Kansas basketball to be viable as a business or as an MLS market. In no way is this a suggestion that MLS clubs need to be as valued in a given city as the other sports which have held sway for so many decades. And there is no doubt that Sporting Park will be full, loud and a great advertisement for MLS, especially given the conditions. But as ever, a dose of context can go a long way toward remembering that for all the success the league and Sporting in particular can claim, MLS is still very much a young league trying to determine exactly how best to cater to its fans.

The word ‘niche' lingers in hearing local media ask Vermes and the Sporting KC players about the upcoming game. That is how they see the sport and any answers come within the context of that point of view. Sporting may be the nominal favorites in this afternoon's MLS Cup final, but it remains clear that the league itself is the underdog on this bitterly cold Saturday in Kansas City.