As the conditions get worse in Denver, the referee is struggling to make a decision about whether or not the United States and Costa Rica can finish their World Cup qualifier. With the U.S. up 1-0 in the 55th minute, the referee opted to stop play, and the lines were cleared off.

Let's just say that it's easy to see why the referee has considered stopping this one on multiple occasions. 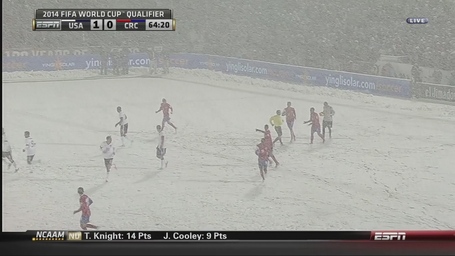 It's not entirely clear what will happen if the game cannot be completed. Normal procedure is to replay a game from the start, with any goals wiped off the board if it has to be abandoned. However, Ian Darke stated on the ESPN broadcast that U.S. Soccer and the match commissioner indicated that the game could resume tomorrow from the point it was stopped.