Watch the throne: It's going to be Bayern Munich's

Will Bayern Munich use the Champions League semifinal to take Barcelona's place at the top of world football?

Share All sharing options for: Watch the throne: It's going to be Bayern Munich's

For years, the football world has centered around Barcelona. From Ronaldinho to Lionel Messi, led by Frank Rijkaard and Pep Guardiola, Barcelona has been the best football has had to offer, thrilling fans and vanquishing opponents from around the globe. Their reign at the top has been celebrated, fawned over and even mythologized. But the Catalans' reign of dominance may come to an end thanks to Bayern Munich. Their Champions League semifinal could signal a new era of Munich-based supremacy.

Barcelona have ruled world football for the better part of eight years. While other teams flailed away, hoping to win any trophy just once, the Blaugrana captured a staggering 12 trophies and will add another when they win La Liga again this season. That includes three Champions League titles, but maybe most impressively, they have advanced to six consecutive Champions League semifinals, standing among Europe's elite each season as if it was their birthright.

There has been no shortage of superlatives to describe Barcelona and almost every celebration of the club included a nod to La Masia. The club's academy was the difference between them and the rest of the world's teams, giving them a remarkable set of players to build the core of their dominant teams around. Messi, Xavi Hernandez, Andres Iniesta, Carles Puyol, Sergio Busquets, Victor Valdes and Pedro all came through La Masia to the senior team. Even Gerard Pique and Cesc Fabregas were La Masia products before being sold and bought back.

No matter who wins, Pep loses 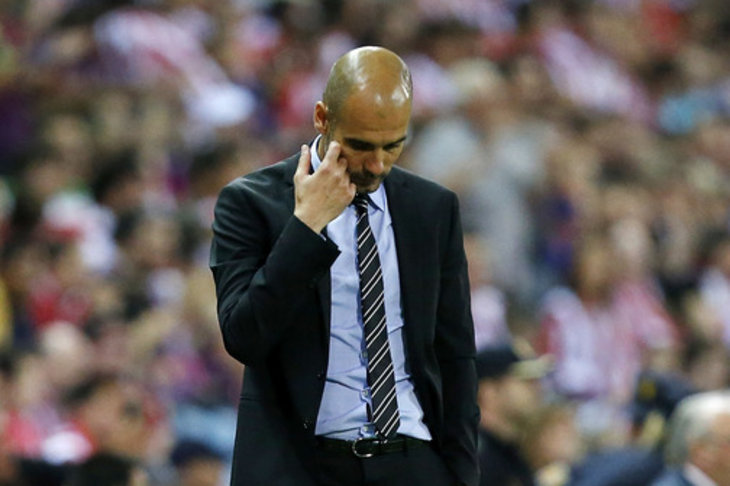 Other clubs could spend as much as Barcelona or develop a culture like Barcelona's, but they couldn't replicate an academy like La Masia and that is what kept Barcelona on top. Only an academy did finally match La Masia -- Bayern Munich's.

Bastian Schweinsteiger, Philipp Lahm, Toni Kroos, David Alaba, Thomas Müller and Holger Badstuber all graduated from the Bayern academy to become the core of the senior team. Like Barcelona, Bayern Munich now had a set of academy products that were the envy of the world. No longer does La Masia stand alone.

Bayern also augmented their squad with a slew of smart signings. Franck Ribery was an older signing, who was later joined by Arjen Robben and Mario Gomez in a single summer. Luiz Gustavo followed, while Manuel Neuer and Jerome Boateng also came in to help FCB reach the Champions League final last season. But befitting a club of grand ambition, Bayern continued to strengthen their team, signing Javi Martinez, Mario Mandzukic, Xherdan Shaqiri and Dante.

Not only did Bayern Munich have the academy and the ambition, but they proved their transfer savvy. They built a wonderful squad that they continued to improve, be it with big money like the €40 million it took to capture Martinez or by combing their own league to pry Dante at a €4.5 million bargain.

Bayern have the kind of well-rounded squad built with a series of transfers that complimented their academy product that Barcelona built the blueprint for. A decade ago, the Blaugrana signed Ronaldinho and Samuel Eto'o, then added the likes of Dani Alves, Yaya Toure, Thierry Henry and Eric Abidal, plus the buyback Pique. Barcelona had showed the way to build a team that could define an era, but it proved fleeting.

Barcelona's shrewd transfer dealings quickly turned to folly, which was never more evident than in their comical attempt to upgrade at striker. The club bought Zlatan Ibrahimovic in a deal that included Eto'o and put a €69 million price tag on the striker, only they soured on Ibrahimovic after a year and sold him at a staggering €45 million loss. Barcelona then replaced him with David Villa at a cost of €40 million, leaving the club €85 million in the red, all to ultimately swap Eto'o for Villa.

Few teams can climb out of a €85 million hole. And Barcelona couldn't, certainly not while Villa disappointed and another €40 million was spent on even more underwhelming players like Alexis Sanchez and Alex Song.

Gone were Toure, Eto'o and Henry, while Puyol and Alves age. No matter how much Barcelona spent, they couldn't match the value or production of the players that once surrounded their magnificent core. Barcelona could no longer follow their own blueprint.

Instead, it has become Bayern's blueprint. They were the ones showing how to best build a club, taking clues from Barcelona at the academy level and matching their ambition. But Bayern improved upon it, and has crept up on Barcelona's status as the world's elite.

Barcelona's place is now in question and Bayern's reign is imminent. The only question now is when the Bavarians will oust the Catalans from their throne. There will never be a better time than over two legs in Munich and Barcelona with a spot in the Champions League final on the line.

Rarely does history allow for one era to transition smoothly and elegantly into another era, but Barcelona has slowly slipped from their pedestal, while Bayern has steadily climbed the ladder. Now, they stand on the precipice of the top step, a Champions League semifinal win away from taking the blue and red torch from Barcelona, painting it red and white and ushering in the Bayern Munich era of world football.

• Full coverage of the Premier League