Bayern Munich vs. Barcelona: Reliving the game in goal videos, GIFs and tweets

Share All sharing options for: Bayern Munich vs. Barcelona: Reliving the game in goal videos, GIFs and tweets

Most fans expected Bayern Munich to do well on Tuesday night. A lot of people thought they would beat Barcelona. One of our writers talked about how this game was a symbolic passing of the torch, and that Bayern would soon become Europe's biggest team. They've made two Champions League finals and have been co-favorites along with Barcelona to win this year's crown since the fall. No one was calling them underdogs against Barcelona.

The Blaugrana were perceived to be evenly matched with Bayern, however, and ended up being anything but. They were thoroughly trounced on the night and never looked like they had a chance in Bayern's 4-0 beatdown.

Even before the match, it was obvious that, regardless of result, it was going to be a spectacle. The atmosphere at the Allianz was sensational.

What an atmosphere at the Allianz Arena this evening twitpic.com/clfnwh

There was a bit of controversy early on, with Barcelona getting away with an early handball. Though it would have been harsh for Victor Kassai to give a penalty for Gerard Pique's handball, he would have been well within his rights.

Typical dirty tricks from these two - puddles on the pitch and blatant handballs. Thank the lord for Honest Jose and Real Madrid.

Bayern didn't have much time to complain about that no-call, as they netted their first goal of the game just 10 minutes later. The goal was all about Bayern's size, which Barcelona had no answer for on a set piece.

The celebrations from the Bayern faithful were even better than the goal. As expected, they went crazy, with this elderly gentlemen being the best of the bunch.

Whatever halftime adjustments Barcelona made didn't work in the slightest. Bayern Munich added their second goal in the 49th minute through striker Mario Gomez, much to the delight of everyone who knows about the Mario Gomez button. This kind of occasion calls for the full version of the Mario Gomez song.

In the 70th minute, Bayern made a defensive substitution, taking out Gomez for defensive midfielder Luiz Gustavo. That appeared to be leading to the Bavarians sitting back and holding onto a 2-0 win, which would have been a very good result for them and an acceptable result for Barcelona.

Incredibly, they kept the pressure on Barcelona and scored twice more. Their third goal, scored by Arjen Robben, was a bit controversial thanks to a hockey check by Müller that helped set it up.

Müller erased any doubt about Bayern's supremacy less than ten minutes later, however, when he finished off a brilliant move set up by David Alaba to make it 4-0.

That led to Barcelona's unraveling mentally, and none more so than Jordi Alba. He got a yellow card for this, and will be suspended for the second leg.

Let's see what our Bayern Munich blog thinks about their performance?

Dirk Nowitzki felt like taking a jab at the Blaugrana, who are known for stringing long spells of passes together, playing keepaway. The tables were turned a bit on Tuesday night.

If you're wondering how much of a historic ass-kicking this was ... it was bad.

DID YOU KNOW? No team has ever lost a semi-final match by four goals. The last time @fcbarcelona lost 4-0 in Europe was in the '94 final.

Barcelona fans are less than enthused with Tuesday night's result, and like most fans do, they're targeting the officials as a coping mechanism. For that, we have a response.

But on a different note, the refereeing has been shameful the entire #UCL season. Not talking only about this game, but the entire campaign.

@sbnationsoccer WTF first 2goals offside3rd is a foul this game is a SCAM the referees were paid come on! BAN bayern munich from UEFA CL2013 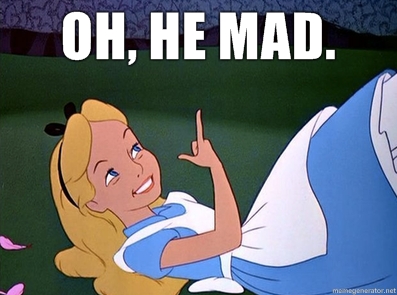