Borussia Dortmund vs. Malaga: A once in a decade kind of awesome

Two-goal stoppage time comebacks don't happen very often. The last time one of those happened in the Champions League was 1999.

Share All sharing options for: Borussia Dortmund vs. Malaga: A once in a decade kind of awesome

Entering stoppage time of the second leg in the UEFA Champions League tie between Borussia Dortmund and Malaga, the visiting side had a 2-1 lead. The first match of their quarterfinal, in Malaga, ended in a 0-0 draw. Because away goals are the tiebreaker in the knockout stage of the Champions League, Borussia Dortmund had to score twice to go through to the semifinal.

About once or twice a season, a team scores a dramatic goal in the final five minutes or so to win a Champions League tie or force extra time. Didier Drogba pulled it off in the 88th minute of last year's final, while Nelson Oliveira had the latest winner in the knockout stage of last year's competition, sinking Zenit St. Petersburg in the 93rd minute of last year's Round of 16.

Those results are uncommon enough to be exceptionally cool when they happen a couple of times a season. A 90th minute or later winner in soccer is one of the best occurrences in sports, mostly because it's really hard to score a goal when the opposing team is packing everyone deep, around their own box, taking away space for a ball to even reach the penalty area. For two goals to go in for Dortmund during stoppage time is truly exceptional.

Manchester United was the last team to score two goals in stoppage time of a Champions League match to either win or send their game into extra time. They did it in the 1999 Champions League final against Bayern Munich, where Ole Gunnar Solskjaer became a United legend:

And even though that happened in the final, the situation that United was in didn't quite match the gravity of the situation that Dortmund were in. When Teddy Sheringham scored in the first minute of stoppage time, Manchester United was headed for extra time. Solskjaer's goal, as dramatic as it was, didn't save United from elimination. Had he missed, United still would have been in with a chance to win the Champions League. 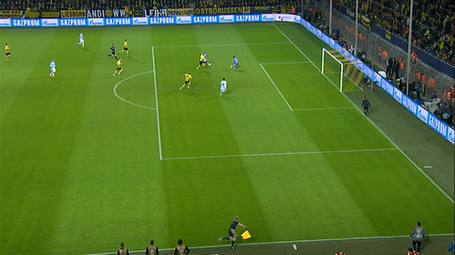 That goal came in the 82nd minute, leaving Dortmund just eight minutes plus stoppage time to score twice. We presumed that they were already into the semifinal, and we weren't alone. This one was done and dusted, for all intents and purposes:

MALAGA GOAL! They have the goal that should send them through to the semifinals, but was he offside? Dramaaaaa.

Malaga up 2-1! Slightly offside there. but Looks like Malaga are going through. #UCL

As the clock passed 90 minutes, all of those people and thousands more appeared to be very, very right, until Marco Reus gave Dortmund life with this goal:

Believe it or not, this sort of goal happens somewhat frequently. A team, in need of two or more goals, is fighting desperately to get back into the game. The team that is defending a lead falls asleep a bit in the dying minutes because they have a multiple-goal cushion and concedes a stoppage time goal to give their opposition a small lifeline. But they wake up after that, pack everyone behind the ball, and never really come close to conceding the second goal.

This exact scenario happened during the last round, when Arsenal scored a late goal against Bayern Munich to get within one goal in the dying minutes. The Gunners never got close to adding the extra goal that they needed. Once there was a real threat of losing, Bayern focused and the game was over.

Malaga didn't appear to have that same level of focus. Or maybe Dortmund was so determined to break through the Malaga defense and find a winner that a brick wall couldn't have stopped them. In any event, they found their once in a decade-plus goal, through the sheer will of Julian Schieber and goal-scorer Felipe Santana, the latter of whom had bombed forward from his central defense position:

There was a hint of offside on the Dortmund winner -- even though a defender was in the goal, Santana looked to be an inch past Willy Caballero -- but many Dortmund fans will see it as justice. Would Dortmund have found an eventual winner if Eliseu's goal was disallowed and the score stayed at 1-1? We'll never know, but for entertainment's sake, be happy that the bad call happened.

Unless you're Malaga's chairman. Then you think that the result of this Champions League tie was based on RACISM:

And meanwhile, the Malaga president thinks it was more than an offside... twitter.com/archiert1/stat…

I wonder what Dortmund manager Jurgen Klopp thinks of these claims?

I'm with you, Jurgen.

• Sergio Aguero the hero in Manchester City’s win over United

• The keys to Bayern’s record-breaking season